"We did not want to meet the children, open up their wounds and leave," says Saad 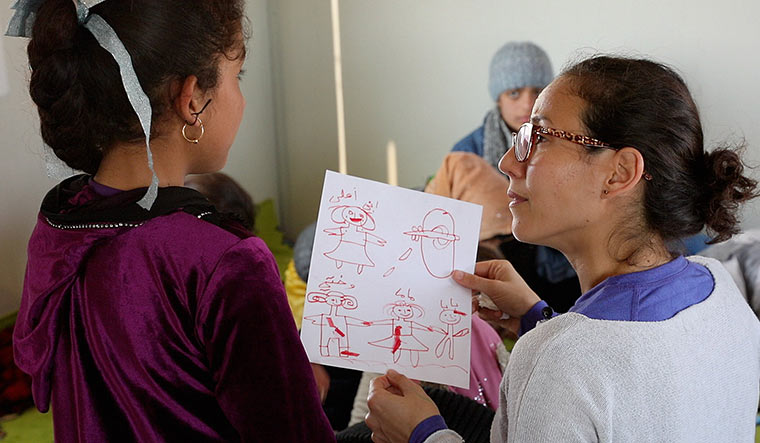 Lending an ear: Saad with an Iraqi girl whose parents were killed by Islamic State.

Myra Saad was born when her country, Lebanon, was in turmoil. “We lived amid conflict, with fear of bombs and tanks and shootings,” says Saad. Today, she is helping children affected by war with art therapy. “It can heal the trauma that generations have felt and also promote empathy,” she says. “Those are the best ways to prevent another war.”

Saad—who holds an MA in expressive therapies with a specialisation in art therapy and mental health counselling from Lesley University in Cambridge, Massachusetts—first came in touch with California-based photo artist Brian McCarty in 2014. The latter had been documenting the stories of children from war zones through his toy photography for a few years. Since then, the two have collaborated to heal war-affected children and have helped articulate their stories. “The idea of working with children from conflict zones and collaborating with them through an art-based process for developing a photo series germinated after I made a trip to Croatia in 1996. It was in the aftermath of the Croatian war of independence,” says McCarty. “[I realised that] it is important to make people share their stories with their children, with the next generation, to stop the cycle of violence. Over the next 15 years, I learned about art therapy and play therapy, and formulated a project to gather the stories of children and articulate them through locally found toys.”

McCarty worked in the toy industry, with top brands like Mattel, Hasbro, Disney and Nickelodeon, and simultaneously fine-tuned his war idea taking guidance from art therapy experts like Judy Rubin and Julia Byers. In 2011, he started the 'War Toys' series. Three years later, he met Saad, who, in McCarty’s own words, had a “unique skill-set” for healing children.

“Over the past eight years, Saad and I have developed a methodology that works,” says McCarty. “And we have travelled to war-torn countries like Iraq and worked with children who have been displaced. We meet them at UNHCR (United Nations High Commissioner for Refugees) camps or schools or whatever had been set up to support them. We assemble groups of 10 to 15 children, and conduct what Myra calls ‘art-based interviews’. However, we are careful not to call it ‘art therapy’. Therapy happens over multiple sessions over multiple visits. And that is not something we have had the budget or resources to do very often.” 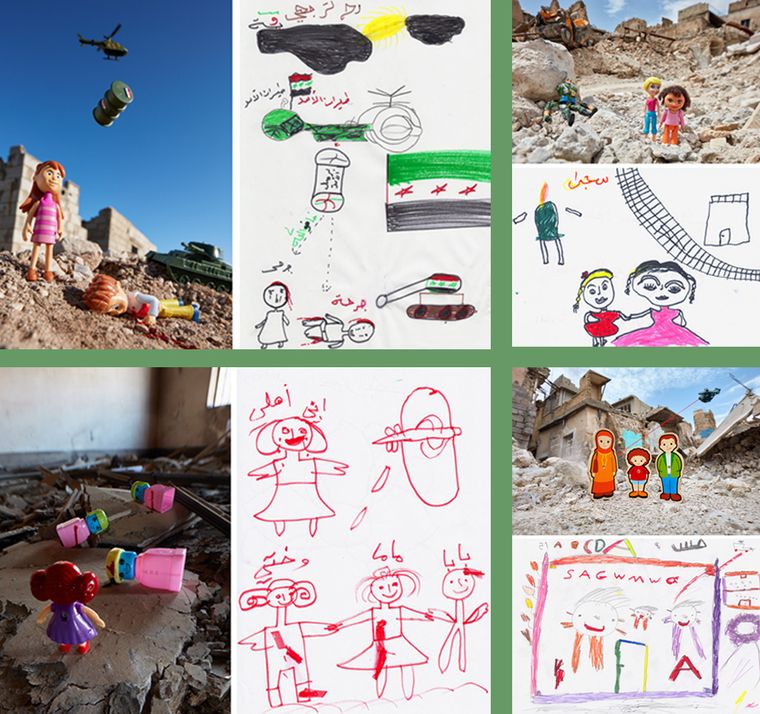 Both Saad and McCarty say that the stories they would hear in these interviews were just heart-breaking. “There are rapes, murders, children being forced to watch people being stoned to death, all these things,” he says. “But even though they share these traumatic experiences, they leave the sessions with smiles and hugs and it just blows my mind—and that is the power of art. Also, it is the power of someone who knows and understands how to manage these emotions responsibly.”

McCarty says that a regular art-based interview session lasts over three hours. “The first part is just to get the children to relax and feel safe and help them open up,” he says. “This part will have a lot of physical activities, play activities and some art activities. We then move on to the actual interview part. It is designed in such a way that the children are asked to draw a story from their life that they want to share with the world. It need not be necessarily about war or conflict. Sometimes we get to hear stories of a cat that comes by the window at night or a child's sister taking a toy truck or whatever. But nine out of ten times, we get to hear war-related stories. In the last part of the session, Myra brings the children out of that [traumatic] space.” Saad points out that this last session is crucial. “We did not want to meet the children, open up their wounds and leave,” she says. “We use art therapy approaches to empower them. The children get the chance to share their stories and be listened to in a safe environment.”

McCarty recalled the story of an Iraqi girl who came to a session in 2017. “She came home after spending a day at her grandmother’s place to discover that her father, mother and sister had been executed by Islamic State,” he says. “She even drew very specifically where each one had been shot. She drew herself crying at the sight of them. Myra then brought her out from that traumatic mind space, and even after sharing the drawing, she had a beautiful smile on her face. When asked what she wanted to become in the future, she said she wanted to be Myra. She left the session with other children, but then she returned to give her a hug.”

In 2019, McCarty founded NGO War Toys to “give future generations a better chance at peace and to envision a cultural paradigm shift in how we think about war as a society and how we encourage our children to play.”

Currently, the NGO is lending support to First Aid of the Soul, a grassroots organisation founded by Ukrainian art therapist Nathalie Robelot. It is also building its programme to help children in conflict zones of Ukraine. “The challenge has been finding actual Ukrainian-speaking art therapists; there just are not a lot,” says McCarty. Untrained and unequipped therapists can cause more harm than good, he says. “This is a big problem... there is a lack of legitimacy and accreditation in many places,” he says, “and too many folks just call themselves art therapists.”