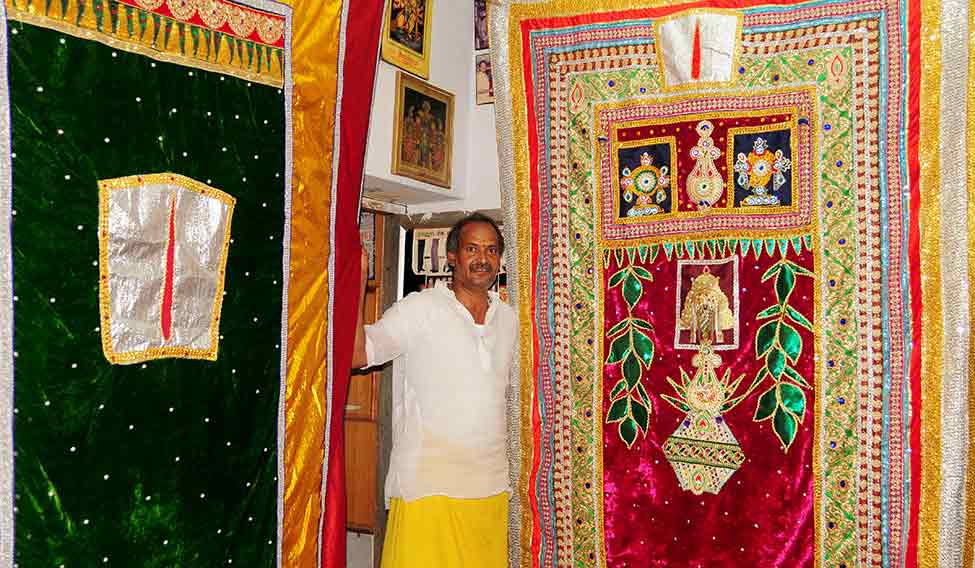 Cut from a different cloth: Mani tries to make his curtains as creative as possible | K.R. Vinayan

Mekala Subramanyam or Mani climbs 2,500 steps to the Tirumala temple in Tirupati, Andhra Pradesh, once a week on a path that was originally used by kings and chieftains. The other route there from Alipiri used by pilgrims is easier but Mani, a tailor with two shops on Theertha Katta street in Tirupati, says he thinks that the lord is taking him on a pushpaka vimanam to the temple, so it takes him only 45 minutes to reach the temple gates. Since the age of five, he used to accompany his father, Mekala Srinivasulu, on Sundays to the temple town of Tirumala where Srinivasulu would sell vegetables to the families living there and return with his basket full of prasadam.

Mani is also known as ‘purdah Mani’ because he stitches curtains for the temples. His first assignment was to stitch a Hundi cloth bag for the Tiruchanur temple. “I was asked to take measurements during Tomalla Seva when only the temple priests are present,” says Mani. “I was stunned and wondered if I had been born only for this. In the excitement I forgot to take measurements properly and had to do it again.”

Every time Mani visited the Tirumala temple, he hoped he would be asked to replace the curtains and one day, he was. The temple administration gave him the task of designing curtains for the three thresholds inside the temple that required draperies. They are the Bangaru Vakili, or the golden entrance where the priests and pundits perform the suprabhatham—the first rituals of the day—the Ramulavari Meda and the Kulasekhara Padi closest to the sanctum sanctorum of Lord Venkateswara.

“Earlier, the curtains were plain ones stitched by temple tailors with no creativity,” he says.

Mani was offered a room at Tirumala so he could work undisturbed and later allowed to enter the temple through the maha dwaram or main gate but he declined the offer. “I prefer to use the same path as the common pilgrim,” he says.

He presents three sets of well-embroidered drapes four times a year for the festivals of Ugadi, Anivara Asthanam, Brahmotsavam and Vaikunta Ekadasi. He also makes two kuralams or frilled silk drapes for the sanctum sanctorum and the sayana mandapam where the lord sleeps during the ekanta seva or the time spent alone with him. He also gives curtains to the neighbouring temples of Thiruthani, Kalahasthi, Kanipakam and Gangammagudi Thalli.

While the early ones might have been a tad simple, Mani now takes pride in making the curtains more decorative. When he travels, he collects beads, sequins, silk, lace and zari gold borders from Chennai, Surat, Hyderabad, Bengaluru and other cities to use in future. It is his wife, Sudeshna, who embellishes the curtains with all the finery. His son and daughter help him make the curtains and he wants his son to follow in his footsteps.

Mani leads an austere life. He eats simple food and sleeps on the floor. He takes almost a week to complete a curtain. Although there was a phase of suffering in his life, Mani says that now he feels complete and there is nothing more he could ask for. “At one point, I was wondering if my life would ever be normal,” he says. “I left it to the lord; he held my hand, lifted me up and has taken care of me ever since then.”

After he hands over the curtains to the head priest of the temple, the head priest purifies it and keeps it in a storeroom to be used when needed. While the jewellery of the lord is changed every week, the curtains are changed once in three months. “I do not have any thoughts or wishes,” says Mani. “All I want is to serve the lord and I consider it an honour that he lets me do so.”