Amaravathi eyes a resurgence as the new capital of Andhra Pradesh

It is a sweltering day in Amaravathi. Yet, tourists throng the small town on the banks of the river Krishna in Guntur district in Andhra Pradesh. Near the 125ft-high Dhyana Buddha statue, the sound of goli sodas being popped fills the air. A man selling ice cream on a handcart is doing brisk business.

Once the seat of power of the Satavahana empire, Amaravathi boasts a rich heritage. From second century BC to AD 1800, it was the cultural capital of the Telugu people. It flourished under the Ikshvakus, the Eastern Chalukyas, the Telugu Cholas, the Kota chiefs, the Pallavas, the Kakatiyas, the Reddy kings and the Vijayanagara empire.

In the past few centuries, however, Amaravathi's fortunes have flagged. But that is about to change. Chief Minister N. Chandrababu Naidu recently decided to make the region around the sleepy, old town the new capital of Andhra Pradesh.

The state government is busy laying the groundwork for the construction of the capital. There is much excitement in the air about Naidu's plans for the proposed city. But, on the ground, there is no activity whatsoever. “We are still in the process of pooling land,” says Nagulapalli Srikant, commissioner, Capital Region Development Authority. “Surveying is being done and we are settling boundary disputes. It will take another month to sign all agreements. Once the capital is built, it will be like New Delhi and Old Delhi. The old town of Amaravathi will be part of the new capital.”

A grampanchayat with a population of 16,000, Amaravathi is 32km north of Guntur city and 39km northwest of Vijayawada. It is known for its Buddhist relics and the Amaralingeswara Swamy temple. It is here that the Buddha is said to have given the kalachakra (wheel of time) sermon. In 2006, the Dalai Lama conducted a kalachakra ceremony in Amaravathi.

The Amaravathi stupa, built during the reign of emperor Asoka, is said to be the largest Buddhist stupa in the country. Though not maintained well, it still attracts thousands of tourists every year. The Archaeological Museum, housed in a small building in the centre of the town, has relics from the third century BC.

Despite Amaravathi's religious and cultural significance, successive governments have done little to develop it into a major tourist destination. With the construction of the new capital, however, the town may get a much-needed facelift. “There is good vastu here,” says G.V. Purnachand, historian and Ayurvedic doctor. “It is at the mouth of the river Krishna and at the middle of north Andhra and Rayalaseema.”

Amaravathi is one of the few places in Andhra Pradesh where the river Krishna flows north instead of south or east. This is considered auspicious, and it was one the reasons that the Satavahanas chose Dharanikota, two kilometres from present-day Amaravathi, to build their capital. Purnachand says Amaravathi has kshetramahatmyam, thanks to the fact that it is the shrine of three religions: Buddhism, Jainism and Hinduism. Amaravathi, which in Telugu means 'the town that lives forever', has an epithet: sridhanyakataka, or 'the city of tolerance'.

“Amaravathi was the springboard from which Buddhism spread to east India and abroad,” says Raghu Babu Yarlagadda, a student of history. “The Satavahanas ruled over Amaravathi in Andhra and Paithan in Maharashtra. The kings were Hindus and their queens were Buddhists, who were patrons of viharas [Buddhist monasteries] and stupas.”

Amaravathi is part of the Buddhist pilgrimage circuit. But, owing to the lack of infrastructure, it is yet to become a tourist-friendly town. With China, Japan and Singapore extending their help in building the new capital, Naidu should focus on developing the tourism potential of Amaravathi, say experts. “But, unfortunately, the chief minister is not thinking along those lines,” says Purnachand.

Perhaps, Naidu can take his cue from Raja Vasireddy Venkatadri Naidu, the 18th century king who gave Amaravathi its name. A benevolent ruler and patron of arts and literature, Raja Vasireddy is credited with renovating ancient temples in the Amaravathi region, including the now famous Amaralingeswara Swamy temple. The edifices during his time won praise from many foreign visitors, including Colin Mackenzie, the Scottish army officer who became the first surveyor general of India.

As befits the history of Amaravathi, Naidu has grand plans for it. He reportedly consulted historians and vastu experts before deciding to construct the city on 212 square kilometres. By building a world-class city in Amaravathi, Naidu is apparently trying to one-up Hyderabad, which has a history of less than 500 years. “Hyderabad was developed during my previous tenure as chief minister,” Naidu recently said. “With the division of the state, we lost Hyderabad. Now, we will develop a new capital, which would be hundred times better than Hyderabad.”

The government is drawing up plans to hold a grand ceremony for the laying of the foundation stone for the new city on June 12. The Singapore government is preparing a master plan of the capital. “Once Singapore submits the master plan, which might happen on May 15, phase-I will be cleared,” says Srikant. The first phase of the city, which will have government offices and essential services, is expected to be completed by June 2018. “We are hoping that this will be the best city on the planet,” says Parakala Prabhakar, adviser (communications) to the Andhra Pradesh government. 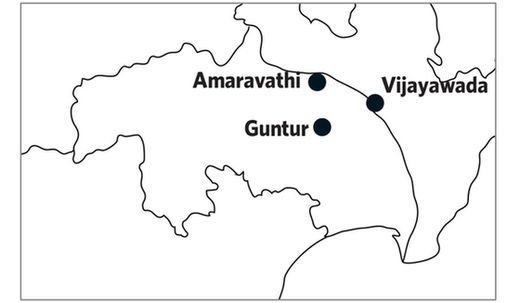 Building the new capital, however, is not going to be easy. The first phase of the project alone will cost thousands of crores. In the absence of Central grants and the state facing a fiscal deficit, raising funds for the capital will be a herculean task for Naidu. Also, critics have been saying that Naidu is focusing only on the 'grandeur' of the capital, and not on the functional aspects of it. And, even his supporters are finding it difficult to explain why the government is procuring fertile farmland in the Krishna basin for building a city.

Place of prominence
* Amaravathi is 32km north of Guntur city and 39km west of Vijayawada. It has a population of 16,000.
* The town is known for its Buddhist relics and the Amaralingeswara Swamy temple.
* It is here that the Buddha is said to have given the kalachakra (wheel of time) sermon.
* From second century BC to AD 1800, Amaravathi was the cultural capital of Andhra Pradesh.
* It flourished under the Ikshvakus, the Eastern Chalukyas, the Telugu Cholas, the Kota chiefs, the Pallavas, the Kakatiyas, the Reddy kings and the Vijayanagara empire.
* The Amaravathi stupa, built during the reign of emperor Asoka, is said to be the largest Buddhist stupa in India.

Your form could not be submitted.
This browser settings will not support to add bookmarks programmatically. Please press Ctrl+D or change settings to bookmark this page.
Topics : #Andhra Pradesh