Come monsoon, diamond-rich regions in the state are flooded by treasure seekers

The day is perfect. A light breeze blows even as the sun shines gently. It has already rained twice in the day and the people are hoping for more rains. At Jonnagiri village in Kurnool district of Andhra Pradesh, monsoon offers hope not just to the farmers but also to the treasure hunters, who descend upon the village looking for diamonds.

An area with rich diamond deposits, Kurnool was in the news recently after an agriculture labourer reportedly found a diamond worth Rs17 lakh in a field in Jonnagiri. Another diamond worth Rs25 lakh was found at Mulakalapetta in Anantapur district.

In Andhra Pradesh, the monsoon could stretch from June to November. During this time, while the farmers make preparations for sowing, men and women walk the length and breadth of the land, their heads bowed and their eyes scanning the earth for the glint that could light up their life. After a heavy downpour, the top layer of the soil gets washed away to reveal the diamonds lying among the stones. It is not an easy task to find the gem, considering that several people are looking at the same time.

Narayanaswamy of Tadipatri travelled 66km to reach Jonnagiri. “I run an electronics business,” he says. “Five of us have come here hoping for the best. A day away from work would not hurt and if I do find a diamond, then it is worth the trip.” One of his friends, Venkatesh, is a weaver and the other, Jarrau, owns a soft drinks shop. 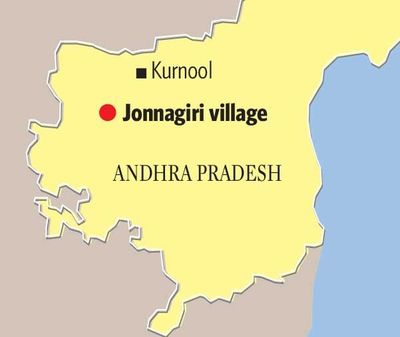 Like Jonnagiri, the neighbouring villages of Tuggali, Maddikera, Pagidirayi and Peravali also witness a rush of treasure hunters in monsoon. While the villagers do not dissuade them from trying their luck, they make it clear that patches of land already ploughed and ready for sowing are out of bounds. Strangely, it is not the villagers but outsiders, mostly labourers from Guntur and Vijayawada, who throng the fields.

Chand Bi works as a maid in a school in Gutti, 16km from Jonnagiri. She utilises her lunch break to do a quick search. “I came here to try my luck and have to rush back now,” she says.

According to estimates, close to 100 people have found diamonds worth Rs5 crore every year from these villages. Jonnagiri was known as Suvarnagiri during the Mauryan period because the region is rich in gold deposits. For the same reason, Emperor Ashoka made it his capital in the south. A couple of kilometres from Jonnagiri is Yerragudi where Ashoka issued one of his rock edicts. Legend has it that during the rule of the Vijayanagara kings, the region had abundant wealth, and precious stones were traded openly. The people who visit the villages today believe the treasures are still buried there.

In 2013, the state government approved the mining lease for the Jonnagiri gold project to Australian company Geomysore Services India in partnership with Kolar Gold, a gold exploration and development company. It is said that Jonnagiri has a resource of 7,20,000 ounces and an exploration target of two to five million ounces. With this, Jonnagiri would become India’s first private gold mine.

So, what happens when a person finds a diamond? The revenue officials and the police get involved. Depending on the size of the rock, the rank of the officials involved also goes up. They are known to have told the finders to part with their stone or face the music.

Fear of harassment, however, has not dampened the spirit of the treasure hunters. Most of them begin their search early in the morning and it goes on till late in the evening. The government has, so far, not stepped in. So, the entire process has a picnic feel to it, with people walking in, looking around and leaving at will.

There are two diamond valuers in Peravalli village, down the road from Jonnagiri. Para Vishwanath Chowdhary and Purushottam Chowdhary are brothers, who are the unspoken kings of the village and the surrounding areas. They were away when THE WEEK went to meet them. The villagers were quite amused by their absence. One of them said, “Did you not see him drive away just now?”

Many believe that finding a diamond would put an end to their misery. However, most of them are not left with much after paying the police and valuers. “Every villager tries once and then goes back to his job,” says a local resident. “When a farmer tills his land, he hopes to find a diamond or two. The desire never goes away.”

Rangeswaramma found a diamond eleven years ago. “It was smaller than a mustard seed,” she says. It was enough for her to buy a gold chain with black beads, says her neighbour Vemuramma. The women talk about this wedding guest who went for a quick stroll in the field after lunch and returned with a diamond worth Rs10 lakh.

Rangeswaramma is back on the fields, hoping to find a bigger rock this time around.