The apple of Reddy’s eye 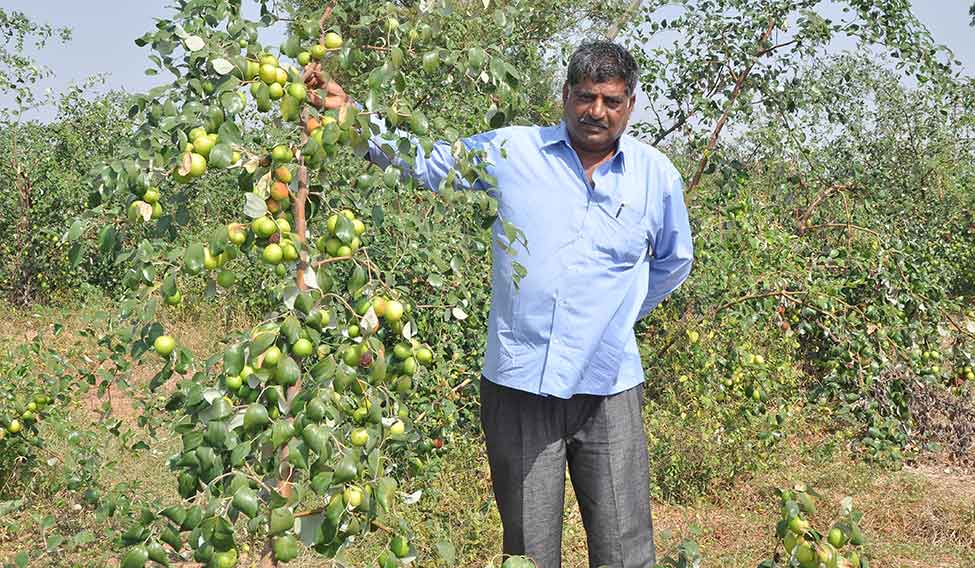 The 18km dusty road to Cherlapally, off the Hyderabad-Bengaluru highway at Jadcherla, passes a town and a farmland with dry cotton shrubs before reaching Guntaka Krishna Reddy's farm. Providing relief against this arid backdrop is a cool breeze, patches of green on his 18 acres, and the crisp, fresh, succulent, sweet-sour apple ber grown here. The small fruit can easily pass off for a Granny Smith green apple. Sink your teeth into it for the crunchy sour taste of apple in the first bite followed by a faint hint of ber in the second.

The Telangana apple, as it is called, has been flooding the Hyderabad markets for the past two years. It is currently being viewed as exclusive because of its price: $100-120 per kg.

Reddy started managing his family farm when it went dry. Said Reddy, “During the seven-year rule of Chandrababu Naidu, there were no rains at all. All bore wells had failed and I was wondering what to do.” He quit the job of a sub-inspector in the police and turned to farming as he could not handle rampant corruption.

Reddy then shifted to New Zealand where he worked at a farm. “New Zealand is famous for its fruits, meat and dairy,” he said. But his heart was in India. In October 2004, he returned home and travelled to Maharashtra and Karnataka to study the farming methods there. He came back and planted pomegranate on ten acres and used pipelines and sprinklers for watering. But, the shortage of water and power meant all plants were not getting watered evenly.

Reddy started drawing the available water from the two bore wells into the pond and planted pomegranate in 2005. “What matters in desert culture is water management,” said Reddy. “Plants should be watered regularly, keeping the pipes well anchored. This I learnt in New Zealand.”

Reddy got one crop per year for 10 years; he started getting close to 50kg per acre from the fifth year. He had 6,700 pomegranate trees on 18 acres till 2014, after which they became weak. “So it was time to sow something else and I was looking for a good fruit for these weather conditions,” said Reddy.

Reddy travelled to Thailand to study the crops and water management system there. He finally zeroed in on the apple ber and the rambuttan, which bear plenty with little water.

Reddy’s apple ber is the imported crossbreed of green apple and jujube. He got 80 graftings from Thailand and 1,200 from Bangladesh, which, apparently, is the actual marketing route from Thailand.

Reddy planted apple ber towards the end of 2013. The plant took six months to flower after sowing and a further three and a half months for harvest. In the first year, Reddy harvested about 15kg per tree and with good care of the plants, he got 100kg per tree.

Said Reddy, “If you want to prolong the season, prune the tree and allow it to grow for nine months. This could yield anywhere between 300kg and 400kg per tree. And, for quality and even size of the fruit, trimming is necessary.”

Reddy’s apple ber weighs anywhere between 90gm and 130gm each; some fruits weighed up to 170gm. These are green, and Reddy is going to experiment with the red coloured ber next year. Pest attacks on Telangana apples are almost nil. “This tree can last for 100 years and will still yield fruit,” said Reddy.

The Telangana government is ready to give $14,000 subsidy for one hectare of apple ber cultivation with a total cost of $35,000. “The government must encourage the farmers in dry areas to focus on horticulture. If so, farmers will never suffer and commit suicide,” said Reddy.