Will remain with NDA; want my work done 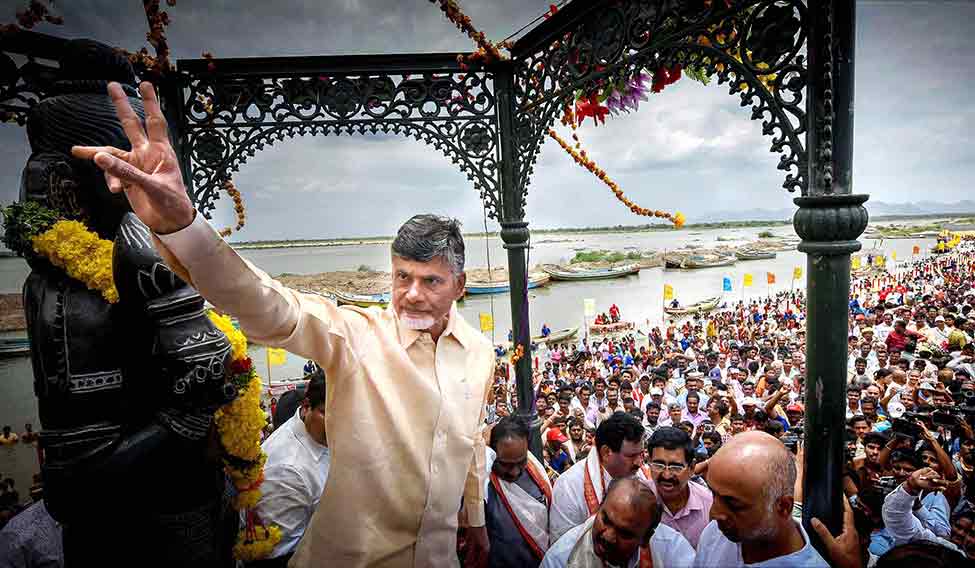 Into his third year as chief minister of post-bifurcation Andhra Pradesh, N. Chandrababu Naidu is an angry man. Angry that the Centre is yet to grant the state the special category status it was promised before bifurcation. A lion’s share of the blame for that, he says, goes to the previous Congress-led United Progressive Alliance government, which “mishandled” the bifurcation and failed to keep its promise to give the residual state its due.

His Telugu Desam Party is part of the BJP-led National Democratic Alliance, which came to power at the Centre in 2014. But the special status continues to elude the state, and Naidu feels the Centre is unnecessarily stalling the matter.

There is talk that he wants to pull out of the NDA. But then, Naidu knows that a confrontation with the Centre will not help his cause. Excepts from an interview:

The special category status is hanging fire. What is your backup plan to raise money for development?

They [the Congress] should have held an all-party meeting to discuss the special status for Andhra Pradesh. But all their actions were only to show that they were doing a favour to Telangana. They wanted to force people to go to [YSR Congress leader] Jaganmohan Reddy. That is the strategy they used, thinking that I would be finished. But that plan boomeranged. People are very smart.

Once the BJP came to power, they gave some assurances. When Modiji came here, he gave very clear assurances, and that is why people are angry with him. They [the BJP] never bothered about Bhadrachalam. It should have been given to Andhra Pradesh.

There are 11 states that have been granted special category status. They [the Union government] are giving funds to states that have no such status. So, what is the special favour they are doing for me? They continue to say they are giving Andhra Pradesh money. But they are only playing with technicalities.

There is talk that you are planning to pull out of the NDA.

I did not say it at all. I want my work to be done. I will maintain my relationship with the NDA. You cannot do injustice and get away with it.

Once, your focus was Hyderabad. Now, it is Amaravati, the state’s new capital.

This time, I am doing it differently. I am developing Amaravati as a city and Polavaram as a lifeline. We are developing Visakhapatnam, Tirupati, and Anantapur. All 13 districts will have smart cities. Altogether, Andhra Pradesh will have 16 cities.

Today, I am going to Anantapur, which had very low rainfall. In fact, it had the second lowest rainfall in the country. Now, we are giving water [to Anantapur] from Srisailam [dam] through the Handri-Neeva [project].

I want to make Rayalaseema drought-proof, so we are promoting rainwater harvesting through check dams, percolation tanks and farm ponds. This year, we had little rain, but much water is available in Anantapur.

Rayalaseema will be the horticulture hub. We are developing agro-processing industries. Agro-processing companies from across the world have been invited and they will see to the forward-backward integration. There will be cold chains and pre-harvesting, harvesting and post-harvesting techniques. We are starting with Anantapur and we will replicate it elsewhere.

We are using a new technique, whereby 15,000 rain guns will be used to give one or two wettings for all dry crops. We can wet one lakh acres a day. This year, I am planning a multi-pronged attempt at harnessing rainwater and linking rivers. I was able to link the Krishna and the Godavari.

I am drawing water from Srisailam and giving it to Rayalaseema. We are also constructing several farm ponds. Now that we are able to preserve water, I am going one more step ahead with water management through drip irrigation and sprinkle irrigation. I am giving 90 per cent subsidy for this.

You have lost your legislators in Telangana to the Telangana Rashtra Samithi. In Andhra Pradesh, though, the reverse is happening.

According to your finance minister, the state stands to lose a lot of money because of the goods and services tax.

The government of India says it will reimburse the loss.

You created the IT industry in undivided Andhra Pradesh. How do you plan to develop IT here?

At that time, my plans were for united Andhra Pradesh. One cannot replicate the same; one has to think differently.

This will be the fourth industrial revolution. First was mechanisation; second was electricity generation; third was information technology; and the fourth will be technology and the internet of things, a combination of sensors, biometrics, apps and smartphones. Today, I am using all this, along with technology.

Is the TRS government in Telangana on the right path?

Why should I talk about it? Hyderabad was my brainchild, and I wish all prosperity to Hyderabad and Telangana.

How do you plan to promote sports in the state, now that most of the international stars are in Hyderabad?

We will have National Games in Amaravati in 2019. We will create the best infrastructure for sports activities.