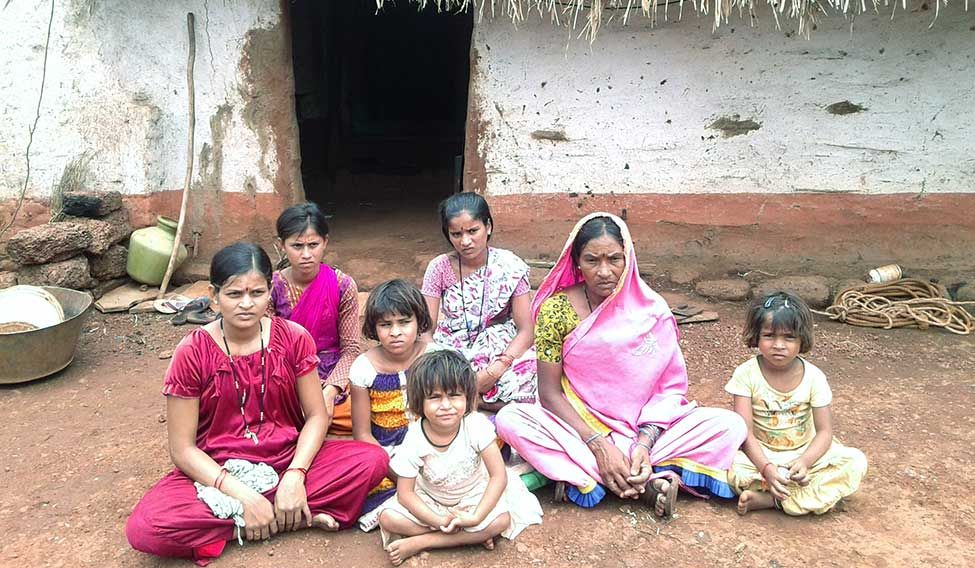 In the name of a son: Seethanibai with her daughters.

Towards the end of last month, #SelfieWithDaughter was trending on Twitter, all thanks to this tweet by Prime Minister Narendra Modi: “I urge all of you, share #SelfieWithDaughter. Also share a tagline that will encourage 'Beti Bachao, Beti Padhao'.” The Twitterati responded in kind, with thousands uploading selfies with their daughters. But such initiatives seem to have failed to transcend the social media barrier.

A couple of weeks before Modi's tweet, a baby was abandoned at the primary health centre at Bagdal in Karnataka because her mother was too ashamed to take yet another girl home. Seethanibai and her husband, Goverdhan Rathod, have been trying for a boy for long, and in the process have had 15 girls, including the month-old one. Except her youngest one born on June 11, all her children were born at home; five of them were stillborn. The little one has been sent to Basavalinga Patta Devuru Swadeshi Dattu Kendra, an adoption centre, at Bhalki, the taluk headquarters.

“I have no regrets in giving away the child. I have no longing to see her or touch her. Had I any regrets I would have brought the child back home with me. But I do not think I can feed another mouth, especially another girl,” says Seethanibai, who is in her early forties. But ask her how having a boy would help, and she says, “Woh mujhe ek lota paani toh dega, aadhi roti to khilayega [He will at least give me a glass of water and feed me half a roti].”

The frustration in Seethanibai's voice is palpable. She is angry that she has now unwittingly become the topic of the day and that her privacy has been infringed, with outsiders advising her about what she should do with her life. The women and child welfare department has asked her to do a tubectomy, putting an end to her quest for a male child.

While Rathod works in Mumbai as a daily wage labourer, Seethanibai stays with her daughters in Sindhol Tanda, 20km from Bidar and about 6km from the Hyderabad-Mumbai highway. Government benefits, however, are yet to make inroads here. The rural employment guarantee scheme has not yet reached the village of 400 families. The primary health centre is 10km away. There are no schools here, and those who wish to educate their children have to travel to Bidar. But there is at least one educated person in most families, and many have government jobs, too. The only benefit visible is the ration system. The Rathods belong to the Lambani (nomad) community. Usually, Lambanis don't own land, but the Rathods have a small home, which is barely enough for a family of four. None of their daughters have been to school. Three of the elder children are married. The first two daughters were married to relatives, and so the family could manage the wedding expenses. The third one was married off with help from the villagers. Four other daughters, aged between seven and eleven, work with Seethanibai. One of them will soon join a children's home and study there. “If they do not go to work, there will be nothing to eat,” says Seethanibai. “We all do weeding work.” They each get Rs50 per day.

Two of her youngest daughters go to the anganwadi daily to collect the free midday meal, which they get without any hassles because of P.S. Ethampalli, the district child protection officer. He is also helping Seethanibai get a loan of Rs1 lakh with a subsidy of Rs10,000 from the local bank to start a dairy.

Till then, the family will have to survive largely on Rathod's meagre income. Rathod visits the family twice or thrice in a year, and brings home about Rs5,000 on each visit. It is only during Rathod's visits that the family buys and stocks some jowar, rice and dal. They also get 30kg of rice every month from the government free of cost under the Anna Bhagya Yojana. “The girls are always hungry,” says Seethanibai. “They keep crying but I can do nothing.” There is no misery in her voice. It is all very matter of fact, like she is holding someone else responsible for her problems, the biggest of them being that she cannot beget a son. “Ab to bas bhagwan ke bharose rehten hain. Aur main surgery karaungi [It is up to God now. And, I will get the surgery done],” she says.

The villagers, too, support the Rathod family in their quest for a son, even someone like Gopal Rathod, a high school teacher. “How can we tell them that they should stop having children?” he asks. “They did not kill anyone. After all, they are only bringing another life on this earth. We have no right to stop them.”

The desire for a male child runs deep in most villages here, and the girl child is looked down upon and ill-treated. For instance, in Konchavaram Tanda in Gulbarga district, where most villagers are landless and are forced to work as labourers, girls are sold off to make money. Though the government's efforts to save the girl child are commendable, it needs to work towards changing people's mindsets, too, because that's where the bias is born.