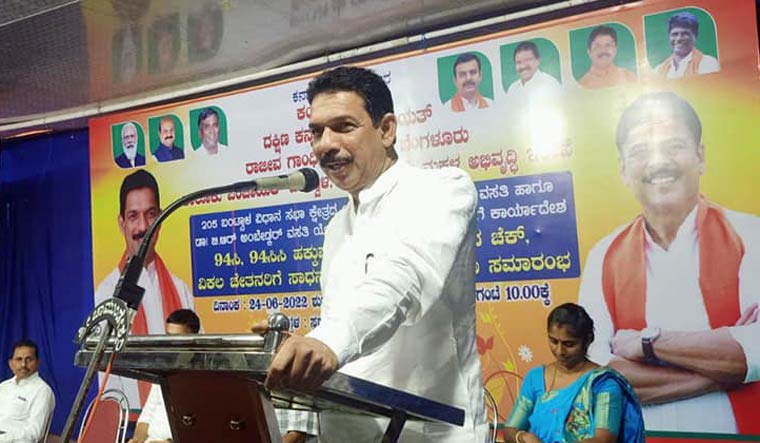 Karnataka BJP President Nalin Kumar Kateel, on Wednesday, demanded the dismissal of the Rajasthan government alleging “total collapse” of the law and order in the state, reacting to the beheading of Kanhaiya lal, a tailor in Rajasthan’s Udaipur by religious fanatics.

Kateel alleged Kanhaiya Lal was killed by the religious fundamentalists with a “jihadi mindset”.

“Kanhaiya had informed the police that his life was under threat. But he was not provided police protection. This shows the total failure of the police and the Congress government in Rajasthan. In Karnataka too, the Congress had adopted minority appeasement as a rule and the party was indirectly responsible for the murder of 24 Hindu activists. Siddaramaiah and his vote bank politics are responsible for the murders as he withdrew the cases against the leaders of anti-national outfits. Appeasement politics is in Congress' DNA. The rising number of violent incidents in the country is a result of this 'jihadi' mindset,” said Kateel demanding that such violent tendencies should be brought to an end immediately.

Meanwhile, the incident has evoked strong reactions from political leaders in Karnataka, who are now demanding severe punishment for the killers.

BJP national general secretary C.T. Ravi blamed the “politics of appeasement” for the violent act. “The appeasement should stop. If killing is the only option to counter the insults made to god or religion, how many times the Hindus have been provoked. Every day, we see our gods being insulted. If killing is the only way out many people will forfeit their lives for indulging in insulting our religion. Our religion has taught us that we must follow our religion and respect other religions,” said Ravi adding that there was a need to study the source of such instigation that makes people perpetrate violence.

“Unless we uproot the source of such instigation, this violence is bound to continue. We need to identify the network behind these acts. Today, one Mohammad has killed a person, tomorrow there will be many more,” he added.

Home Minister Araga Jnanendra condemned the killing as a “most brutal and uncivilised act”. “The cowards who have indulged in the heinous act must be given severe punishment. The ones who beheaded an innocent man are mere actors, we need to track down their fanatic leaders,” he said.

The former chief minister and JDS leader H.D. Kumaraswamy, in a series of tweets, condemned the act saying, “I am aghast. This is a beastly attack on freedom of speech and expression. No religion justifies violence as it is not a solution or answer. All political parties should uni-vocally condemn this act and the perpetrators of violence should be severely punished. Such incidents should not be repeated. Not law but mind transformation can pull us out of such a situation. There is no religion that needs to be protected by killing others. You cannot save a religion through killing, communalism, intolerance and hate. Communalism can triumph only when humanity dies. Let Kanhaiya’s death put an end to such bad tendencies,” said Kumaraswamy, adding that those who are celebrating after brutally killing another human being need to change their mindset.

Mysuru BJP MP Pratap Simha dared the Muslim religious leaders to issue a fatwa against Kanhaiya Lal’s killers. “Muslims are not terrorists but most terrorists are Muslims. Are the good Muslims supporting these fanatics? If they do not raise their voice, they will also be suspected. Where are the moulvis and mullahs? I dare them to issue a fatwa against the killers of Kanhaiya lal. Is your work only to teach people to throw stones after Friday prayers?,” asked Simha,

Questioning the state Congress leaders, Simha said, “They cry foul if the land-grabbers face action. Where are they hiding now? Is it enough to just tweet and sit at home?”