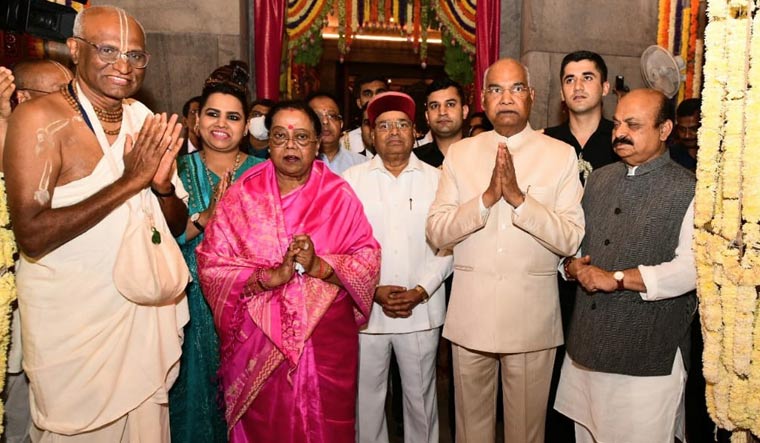 The single defining quest of the sages, kings, scholars, poets and architects of this land since ancient times is plurality, President Ram Nath Kovind said after inaugurating the new ISKCON temple in Bengaluru's Vasanthapura on Tuesday.

Religious impulse is at the heart of India’s culture, he said.

"All competing world views, from 'Advaita Vad' to 'Vishishtadvaita Vad', all have flourished under one umbrella. There are different sects, such as Vaishnavism, Shaivism and Shaktism. Just as there can be many ways to reach the top of this (ISKCON temple) hill, there are different paths to realise the Supreme, such as Jnana Marga (path of knowledge), Karma Marga (path of deeds) and Bhakti Marga (path of devotion). Yet, in Hinduism, you never know where one ends and another begins, as if they are all interlinked by their common faith in the divine," said Kovind, recalling spiritual leaders Shankaracharya, Ramanujacharya, Madhvacharya, Shri Chaitanya Mahaprabhu, Ramakrishna Paramahans and Swami Vivekananda.

Bhagavad Gita also offers different lessons to different people, depending on their qualification, he said.

Calling the temples “the most important symbols of Hinduism,” Kovind said, "Temples are sacred sites, where the worshippers feel the presence of the divine, be it in the form of vibrations or energy or a rush of the intense devotional feelings. Coming to a temple, one can leave behind the world and its noise and feel enveloped in peace. But temples are also much more than places of worship. They are like the 'sangam sthal' - the point of holy confluence, of art, architecture, language and knowledge traditions."

Recalling A.C. Bhaktivedanta Swami Prabhupada, the founder-acharya of the International Society for Krishna Consciousness, Kovind said his commentary on the Bhagavad Gita had guided more seekers around the world to the mysteries of Lord Krishna’s discourse to Arjuna than any other book.

"As this year marks Srila Prabhupada’s 125th birth anniversary, Sri Rajadhiraja Govinda Temple is a fitting tribute to him, as temples, for him, were the entry points to the path leading to a life of joy, peace of mind and God-consciousness," reasoned Kovind, who was accompanied by his wife and daughter.

"Prabhupada's spiritual journey began with the moral discipline inspired by Gandhiji. At 69, he went on a journey to carry India’s message of peace and goodwill to the West. For those seeking spiritual help in troubled times, his words must have felt like first drops of rain to the thirsty. The chanting of ‘Hare Krishna’ on city streets became a cultural phenomenon. Within only 12 years, he had succeeded in establishing an international confederation of more than a hundred Krishna temples, a publishing house, educational institutions and farm communities," recounted Kovind.

The president hailed ISKCON Bengaluru for transforming a "barren hillock" into a magnificent ISKCON Sri Radha Krishna Mandir at Hare Krishna Hill. He also lauded the Akshaya Patra Foundation, the world’s largest NGO-run school lunch programme. "This movement was inspired by Srila Prabhupada’s wish that nobody, especially no child, should go hungry within a ten-mile radius of a Krishna temple. This initiative feeds fresh, nutritious mid-day meals to over 18 lakh children in government schools across the country every day. During the pandemic, Akshaya Patra and its supporting organisations also provided over 25 crore meals to the distressed people," said the President, lauding Madhu Pandit Dasa, president, ISKCON, Bengaluru and chairman of Akshaya Patra Foundation and his team. He also wished them success with the upcoming Vrindavan Chandrodaya Mandir project in Vrindavan.

Culture is, what we are: CM

Chief Minister Basavaraj Bommai, who recalled Madhu Pandita Dasa's speech said if many cities are rich but poor spiritually, it is because many people don't know the difference between civilisation and culture.

"Civilisation is what we have. Yesterday, we used a bicycle, today we are riding motorcycles and planes. This is growth of civilisation and science. Culture is what we are today. To have inner consciousness and to know what we are we need both "daiva" (the divine) and a guru (teacher). And through bhakti (devotion) we can achieve it. Bhakti is unconditional love. You melt and merge with divinity. That is the culture of our country. The Bhakti movement is integral part of our country alone. A long tradition of having a connect with the almighty through prayers," said Bommai.