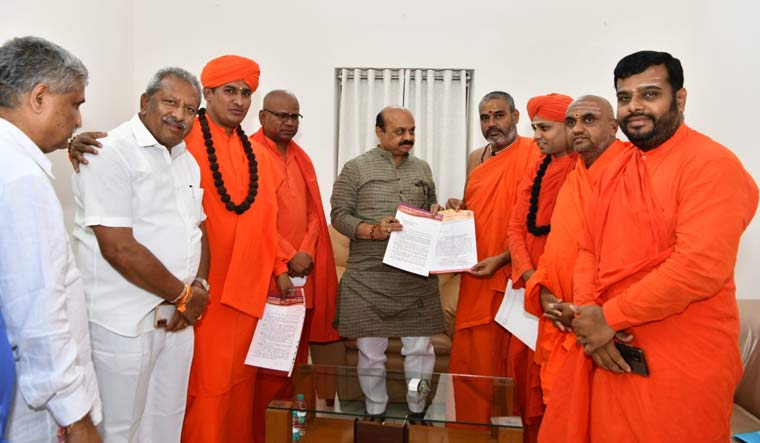 The Karnataka government on Monday issued an order to effect corrections to the textbooks revised by the committee headed by Kannada Development Authority member Rohit Chakrathirtha after Kannada writers, activists and religious pontiffs representing various castes and political parties held series of protests against the revision alleging serious “omissions”, “misinterpretation of facts” and “saffronisation” of the textbooks.

The government order issued by the state education department has sought to correct at least 10 points in the revised textbooks that had been objected to. All changes will be made through an additional supplement as the textbooks for this academic year have already been printed and the changes will be incorporated in the textbooks when it goes for reprinting next year.

Primary and Secondary Education Minister B.C. Nagesh said the task of revising the textbooks was given to the committee headed by Chakrathirtha on December 17, 2021 as some details in certain chapters were found to be “unnecessary” and “inappropriate for the age” of students in the lower classes.

Prominent changes that will be made to the textbooks include insertion of the prefix “Architect of Indian Constitution” in the chapter related to Dr Babasaheb Ambedkar, which had been omitted in the revised textbook (Class 9 Social science).

In the Class 7 Social Science textbook, the chapters on “Bhakti cult” and “Sufi saints”, which were dropped from the textbook, will now be included.

In the Class 7 first language Kannada textbook, the author of the poem ‘Gombe Kalisuva Neeti’ had been wrongly mentioned as Dr R.N. Jayagopal and will now be corrected as Chi Udayashankar, the original author.

The pictures of poet laureate Kuvempu and Huyilagol Narayanrao in the Class 7 - Social Science (Part 2), which had been dropped in the revised textbooks, will be reinstated.

The contributions of prominent Lingayat or Veerashaiva mutt Sri Kshethra Siddaganga and the Vokkaliga’s Sri Adichunchagiri Mutt, which had been dropped in the revised textbooks, will be retained in the Class 6 – Social Science Part 1. Leading philosopher-sages Purandaradasa and Kanakadasa will continue to be featured in the textbooks.

The contribution of Surapura Nayaks, who led the rebellion against the Mogul rulers, will be retained in the Class 7 Social Science Part 1 textbook. Changes to the chapter on social reformer Basavanna in Class 9 Social Ascience Part 1 will be incorporated. A few lines in the chapter on Kuvempu in the Class 4 Environment Science textbook will now be rectified.

Meanwhile, a federation of backward classes and dalit pontiffs have alleged that the revised textbooks had done injustice to dalit and backward class icons and overlooked the principle of social justice. “The chief minister should intervene and withhold the revised textbooks and consult experts to find an amicable solution,” said the memorandum submitted to the chief minister by the pontiffs of various mutts.