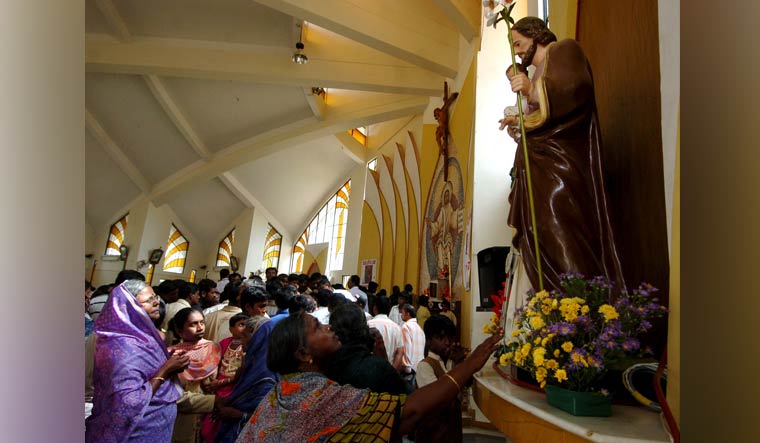 Representational image of a church in Bengaluru | Bhanu Prakash Chandra

The Karnataka High Court on Monday refused to pass an interim order to stay the ongoing survey of churches ordered by the Directorate of Minorities amid stiff opposition from the Christian community, which fears that such an exercise would stir up “anti-religious feelings”.

Further, the court has issued notice to the state government to file its objections within three weeks to the petition (PIL) filed by the People's Union for Civil Liberties (PUCL) challenging the survey, claiming it is a violation of the right to freedom of religion guaranteed under Articles 25 and 26 of the Indian Constitution.

During the argument of the case, Ravivarma Kumar, who appeared for the petitioners stated, “The survey is discrimination on the basis of religion against Christians, amounts to persecution and interference with the administration of the institutions, which is not authorised under the law.”

The division bench of Chief Justice Ritu Raj Awasthi and Sachin Shankar Magadum observed, “The data has been sought by the minority welfare department and it can be for the welfare of minorities. There is nothing on record to show that in any manner they are going to persecute the Christians.”

The PUCL filed the petition challenging a communication—to conduct the survey of churches and missionaries—issued by the Directorate of Minorities on July 7 this year, which intends to collect data related to the churches, their location, address, khata and survey number and the name of the pastor/priest.

“There is no government order on the survey but only a letter directing the district administrations to collect information about the churches, which is illegal, discriminatory and unconstitutional, too,” said Y. J. Rajendra, president of PUCL, Karnataka.

“It violates a citizen's right of equality and right to practice, profess and propagate one's religion. The purpose of the survey is not stated. If the state government wants to bring in anti-conversion bill, let them follow the due process laid down in the Constitution and let it pass through the legislative process.”

Meanwhile, the Karnataka Region Catholic Bishops Council has opposed the survey of Churches and Christian missionaries in the state calling it “discriminatory”.

“With the survey, our pastors and sisters will be identified and may be unfairly targeted,” said Bengaluru Archbishop Peter Machad, during a press meet on Monday. He also added that the Church was against forcible, fraudulent and incentivised conversions.

Besides the survey ordered by the minorities welfare department, an internal order of the ADGP (Intelligence) and a survey of Christian missionaries ordered by the house committee for backward classes and minorities to check "forced conversions" has led to fear of persecution and apprehension among the Christian community leaders.

The Karnataka Legislature's house committee on backward classes and minority welfare, which met on October 13, decided to carry out a survey to check "forced conversions" by Christian missionaries.

However, the 20-member committee chaired by BJP MLA from Hosadurga Goolihatti Shekhar (in the absence of the chairperson) directed the officials of the backward classes department and also of home, revenue and law to survey "authorised" and "unauthorised" (without permission from minority welfare department) churches.

During the monsoon session of the Karnataka Assembly in September, Shekhar had alleged forced conversions were rampant in the state and his mother had been forcibly converted to Christianity too.

JDS MLA Devanand Chavan alleged the missionaries were targeting the vulnerable Banjara community and converting entire "thands" (settlements). This had led to many MLAs and ministers demanding an anti-conversion bill to be passed in the state.

An internal order was issued by the ADGP (Intelligence) to all the deputy superintendents of police, a day after the 20-member Legislative Committee on welfare of backward classes ordered a survey of churches and community prayer halls built in houses.

The police were asked to collect the location of the churches, details of the heads of the parish and owners of the houses and religious denomination of each church before October 18.

Former home minister and Congress MLA from Sarvajnanagar K.J. George, who addressed a press meet this week said: "The recent internal order by the ADGP of the state intelligence department to gather information about “authorised and unauthorised” churches is illegal as the department is empowered only to gather information and report to the CM on issues related to internal security, terrorism or anti-national concerns.

“No police personnel can summon a priest or religious leader unless an anti-conversion bill is passed and a set process is in force. Action can be taken only after the bill is passed through an ordinance or in the legislature," said George, adding the Congress Legislative Party would decide its course of action to tackle the proposed bill.

The council is apprehensive over the state government's recent proposal to introduce an "anti-conversion bill" and has cautioned it would precipitate "uncontrolled communal conflagrations" in the state.

Citing that the Christian community is 1.8 per cent of the state's population, the Catholic Bishops Council, in its memorandum to the chief minister recently, stated there was hardly an increase in the Christian population and that the anti-conversion bill was made to suit the political agenda of some parties.

However, minorities welfare committee members noted that the members of the backward classes who convert to Christianity officially remained as Hindu and retained their caste identity to avail government reservation facilities. And the committee has now proposed to withdraw the benefits for those who convert.

Meanwhile, the Bishops Council has instructed all churches to direct all queries to the diocese. “We have around 14 dioceses in Karnataka with each managing five to six districts. The Bengaluru diocese alone has around 120 churches under it. We have asked the priests to forward all questions (of the survey) in writing to the headquarters. Multiple entities are conducting the survey without a proper government order,” said Kantharaj, PRO of Bengaluru diocese.

The diocese has demanded clarity over classifying the churches and prayer halls as "authorised" and "unauthorised" too.

“The government already has data on the survey number of the properties. While all the major churches are built only after obtaining nearly 23 government clearances, there are houses conducting family community prayer congregations in smaller towns and villages where there are no churches.

“But these cannot be called 'unauthorised' as the Indian Constitution guarantees everyone the right to practice and profess one's religion. By simplifying the government norms, these small prayer houses can be regularised, just like the unauthorised temples which were regularised recently,” said Kantharaj.

Admitting that there were sporadic incidents of forced conversion reported but not yet verified by the authorities, Kantharaj said the Christian community has many denominations and is divided over its approach to worship too.

“The larger section is the Roman Catholic churches, which come under qualified priests and the archbishop. We don't believe in forced conversions as it would be superficial and without conviction. You cannot make a person give up his core beliefs,” said Kantharaj.

“Many other segments like the protestants and Methodists have their own structures and beliefs. I find it difficult to believe evangelists are brainwashing people.

The Infant Jesus shrine in Bengaluru has people of all religions rushing to it every Thursday. Be it Velankanni or Dharmasthala, it is a matter of people's faith. The Christian establishments and educational institutions have more non-Christian members. But have you heard of conversion?” he said.