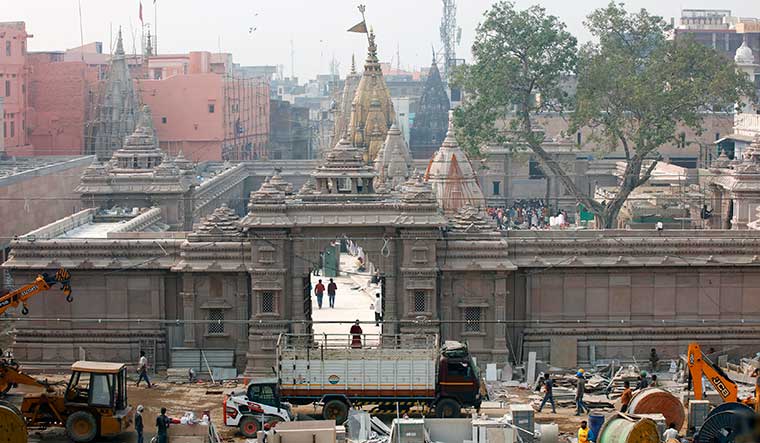 Between unending pyres marking the ends of mortal frailties, and the embrace of a creator transcending all ends and beginnings, lies a pathway that bridges the spiritual and the temporal.

This is the Kashi Vishwanath Temple corridor, the most visible manifestation of the Kashi Vishwanath Dham project initiated in 2018. The passage offers unfettered access to the mandir from the Ganga, a river that is believed to have been brought to Earth and tamed by Lord Shiva.

In Kashi (also known as Varanasi), the holiest city of Hinduism, Lord Shiva resides as Vishwanath or lord of the world. The name of the city means that which emits endless light to the world. It is a city that ancient texts such as the Shiv Puran say will outlast the end of the world.

The temple itself was not the original residing place for the shivling, the abstract representation of its reigning deity. It was placed in at least five other locations, say experts. From the end of the 10th century, the temple and the city faced an unending onslaught of foreign attacks. Its present form—a central spire (shikhar) flanked by two smaller ones—was constructed by the Maratha queen Ahilyabai Holkar in 1780. The only major addition after that was in 1839, when two spires were gilded with gold gifted by Maharaja Ranjeet Singh. Its most imposing neighbour is the Gyanvapi Mosque, the foundation for which was laid by the Mughal emperor Aurangzeb in the latter half of the 17th century.

The Ganga lies eastward from the temple complex, which can be accessed from three other sides, too. The corridor, which is in its last phases of completion, is designed to welcome pilgrims coming by water. They will alight at the ghat that lies between the Manikarnika and the Lalita Ghats, climb up the ghat, enter through a gateway and cross a distance of some 400m through undulating land. There will be escalators, too, for those who need them. 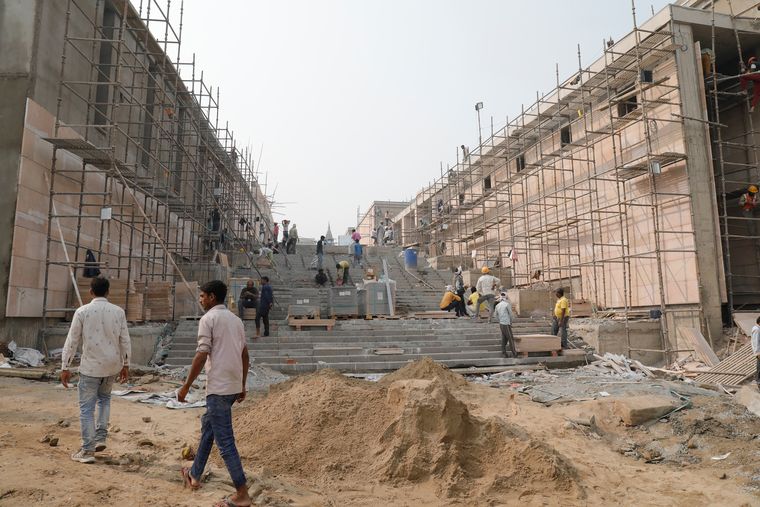 Way to worship: Workers on the steps from the Ganga to the pathway to the Kashi Vishwanath temple, with the Manikarnika Ghat (below) to its right.

The project covers just over five hectares, of which 70 per cent is open space. Its religious significance lies in the opportunity it gives people to be in a sacred space for long hours as opposed to what has been possible till now.

To carve that space, houses around the temple had to be acquired and demolished. Deepak Agarwal, the divisional commissioner of Varanasi, said that the initial plan envisaged acquiring 197 properties (including those owned privately and by trusts), but this number crossed 300 in the final plans. That translated into 1,400 entities to be rehabilitated. Agarwal heads the Shri Kashi Vishwanath Special Development Board—the development authority overseeing the project. He said the process was centred on constant dialogue, with even Uttar Pradesh Chief Minister Yogi Adityanath chipping in when things got difficult.

The acquisition and subsequent rehabilitation and/or resettlement were complicated by the fact that some properties had no legally defined owners. And, some owners chose to shut their doors on the government.

“As challenging as that was, we never stopped moving, working on different aspects concurrently. Our success can be measured by the fact that there is not a single case before any court today,” said Agarwal.

Pilgrimage to this shrine, surrounded by narrow galis (lanes), had been an unpleasant experience over the years. In addition to the physical challenge of moving in a narrow space and the problems of sanitation and hygiene, the temple as it existed till recently had only a few feet between the inner sanctum and the man-marked boundaries. A visit at any hour would thus entail just a few moments with the deity, after perhaps hours of jostling in queues. The restored complex has an expansive ambulatory (cast in stone from Chunar) arcade around the sanctum. From the river to the temple are public facilities, an auditorium, a mumukshu bhavan (where terminally ill and elderly wait for death in prayers), a gallery, museum and a Vedic centre among other structures.

Shrikant Mishra, the chief priest of the Kashi Vishwanath Temple said that the temple was unlike any other in the world because it was in the capital of Lord Shiva. In Kashi, Shiva comes together in his forms as teacher and king. This unity of the dualities is reflected in an oft-used phrase around the city, ‘Ka Raja, Ka Guru’ (roughly: what is the difference between ruler and teacher).

The temple is the court of Shiva where he rules in consultation with his ministers. These ministers of the king include the gods Tarkeshwar and Bhuvneshwar, whose shrines lie adjacent to the main temple. Kashi’s lofty pedestal is both physical and symbolic. In Vedic Sanatan Dharma, it is not built on earthly land, but on the middle prong of a trident. It has equals in seven other cities of the world (including Ayodhya and Ujjain) which offer paths to salvation, but the belief is that all these paths would lead the souls to Kashi for final liberation.

The shivling here resides with his female counterpart Annapurna, who decides how the prayers of pilgrims are to be answered. It is thus an important seat of feminine divine power as well.

The project, to be dedicated to the faithful on December 13, has been designed by Ahmedabad-based HCP Design, Planning and Management Private Limited. HCP’s managing director Bimal Patel’s roster of significant projects includes the Central Vista redevelopment project in Delhi.

Patel said that the most astonishing discovery when the project got underway was how “callously” temples within the homes—that were acquired—had been treated. “In many cases, the shikhars (spires) had been used as architectural props,” he said.

It was the imagined destruction of the idols within these temples that provoked a section to protest against the project. These idols will, however, find space in a gallery on the path of the corridor where they are to be worshipped as previously.

These disapprovals clustered under the banner of the Mandir Bachao Andolan (Save the Temple movement) have been chronicled in a book called Udta Banaras by a former journalist Suresh Pratap. “People sat crying outside their houses as they were torn down,” he said. “Brother was turned against brother. While one tried to delay the process, another was given a contract (by the administration) to carry out the demolition.”

For the project’s makers, however, it marks how the present can be carved without disrespect to the past. Patel said: “Our respect for heritage must not paralyse us from respectfully and sensitively bringing about a transformation”.

It is only in that spirit that the ages can coexist, as Kashi’s favourite deity symbolises. 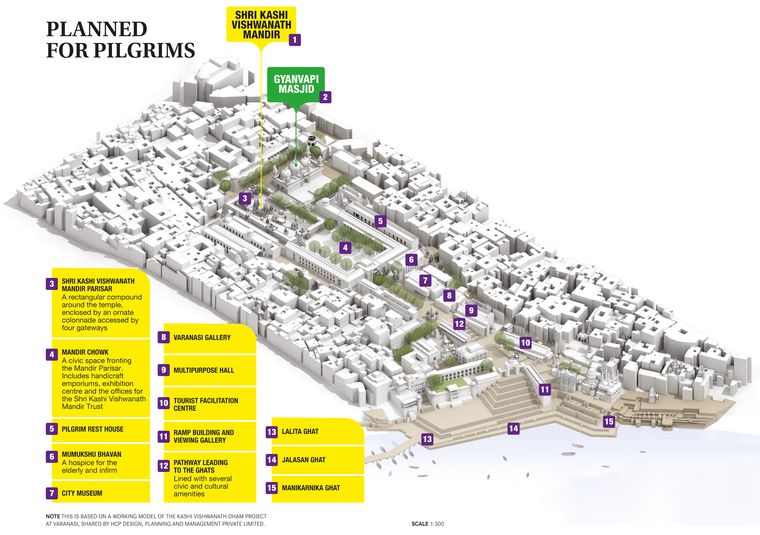