At every stage, dialogue remained our basis 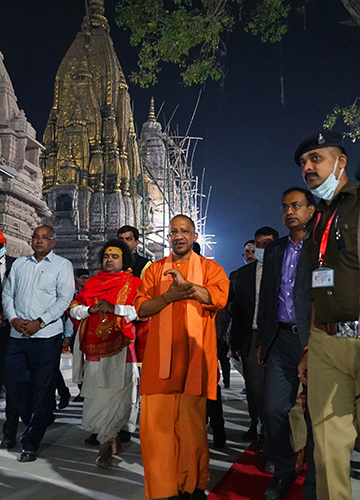 Q What is special about this project?

A/ This is the prime minister’s dream project. Through the prime minister’s chosen projects, we can see the culture of India being protected and restored. We see this in different forms. The Kedarnath Dham was destroyed in 2013. The first phase of its restoration has recently been completed and it looks beautiful.

Between the 11th and 17th century, Kashi was attacked numerous times, starting from the time of Muhammad Ghori to Aurangzeb. The first complex, after being annihilated by Aurangzeb, was built by Maharani Ahilyabai Holkar (of Indore in 1780). The gold to cover the spires was gifted by Maharaja Ranjit Singh (of Punjab in 1839).

In 1916, Mahatma Gandhi, the father of our nation, came to Kashi. He had sharp criticism for it. He said that if a being from another world were to drop into the temple area, he would feel that he had landed in hell; such was the dirt and stench.

As a devotee myself, I have been dismayed by the narrowness of the lanes and the filth. The prime minister was firm that people [of Kashi] should not be inconvenienced during implementation of the project, and that livelihoods should be protected.

In the initial project design, 196 properties had to be acquired. Negative campaigns were started against us. It was through dialogue that things became clear. People gave up their properties voluntarily. Compensation and rehabilitation is ongoing. In the 400 structures that we demolished, 1,400 people have been rehabilitated. Soon, the mandir complex in its grand form will be dedicated to the people. It was the prime minister’s inspiration, leadership and direction that made it possible.

Q/ You are known to keenly monitor projects. Here, too, you intervened at the smallest levels.

A/ At the start, some saints were misinformed. They became eager to agitate. I spoke to each one of them, satisfied everyone and received the blessings and support of all. Those opposing the project were constantly doing propaganda.

Houses throughout the corridor had temples and idols. All these were taken out with due respect and their puja continued. Yet, some people got discarded idols from idol makers, or stone that had been discarded, and [they] threw these by the corridor, made videos of it and spread it through social media. I came that very night. At every stage, dialogue remained our basis. We presented correct facts. We made people understand that Kashi was getting something very big. 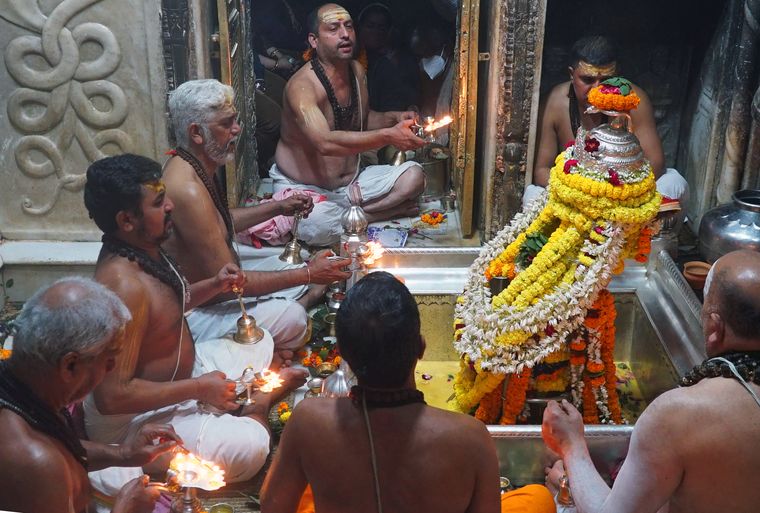 One in prayer: Priests performing the evening aarti at the temple | Pawan Kumar

Q/ How do you respond to environment experts who argue that the project causes great damage and that its assessment reports were not given due publicity?

A/ The implementation of any big project is open to comments by the public, as is this one. I would give two examples to those opposing it. I was on an inspection on a National Disaster Response Force steamer. A senior officer told me that earlier new recruits at Varanasi would get red blotches on the skin within two-three days of joining (as they underwent diving and swimming training in the Ganga). Leave alone drinking, the water was not even fit for bathing. That no longer happens. This indicates that the pollution levels are lower. Recently, during the preparations of the Dev Deepawali, I saw dolphins in the Ganga. This is also indicative that the water is clean. The results of the Namami Gange (National Mission for Clean Ganga) are there for all to see.

Q/ Does any community need to be cautious or afraid of the scale at which temples are being restored?

A/ There is no need for anyone to be scared. This is the preservation of culture. Everyone should be a part of it. The day that this project is dedicated to the public, everyone will thank the prime minister.

Q/ There is a petition before the court in Mathura, on behalf of the Sri Krishna Lalla, to remove the Shahi Idgah Masjid on the premises of the Katra Keshav Dev Mandir. This, despite The Places of Worship Act, 1991, prohibiting any change in the status of existing religious places. Do you think that such petitions are merely for the sake of publicity?

A/ There is a need to steer clear of such things. Once a matter is sub judice, we anyway cannot and will not interfere with it. The courts will examine all perspectives.