A school for children undergoing cancer treatment is making a difference

Ashish Kumar of Bihar has been in Mumbai since April this year. Undergoing treatment for cancer, Kumar, 16, loves the city that has made him a student again. In between the chemotherapy sessions and consultation with the doctors at Tata Memorial Hospital, Kumar attends a special school where he practises his English, clears doubts on geometry and picks up a few words of a new language from his classmates, who like him have made the Maximum City their home in the hope of overcoming the disease.

“I feel very good here so I don’t miss a single class,” says Kumar. “There is nothing for me to do in the rented accommodation. Here there are others like me and I don’t feel different.”

For the past three years, CanKids, a support group for children with cancer and their families, has been running Canshala in the two rooms of Jagannath Bhatankar Municipal School at Parel in a public private partnership with the Brihanmumbai Municipal Corporation. At 10:30am every day, a bus collects the students from the various dharamshalas—which serve as a temporary shelter for cancer patients and their families—across the city and brings them to the school. The children are served a nutritious breakfast before class, which lasts for two hours. Then lunch is served, and after that it is activity session till 3:30pm. After the activity session, students who need to go for their chemotherapy sessions are taken to the hospital. The rest go back to the dharamshalas.

Since its launch, the school has had more than 420 students; currently, it has 20 students. The siblings of such children are also admitted so that their education doesn't suffer while their parents are attending on them.

As in a regular school, the students get uniforms, books and school bags and they take routine exams. Since the BMC is involved, the students get a valid school leaving certificate which makes them eligible to continue their education in the next grade.

“Some children who came from a Hindi-medium background joined an English-medium school after going back, as their English improved while they were here,” says Priti Dhall, director of CanKids, western region. 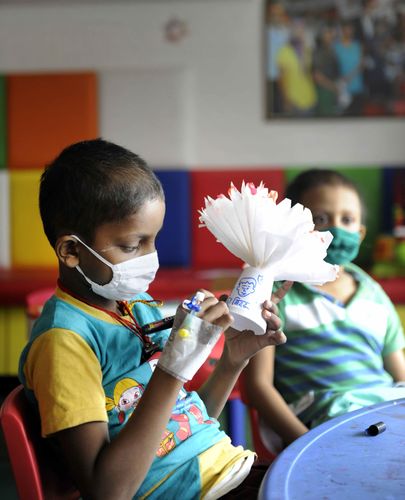 At Tata Memorial Hospital, the young patients have an option of indulging in activities like colouring, crafts and watching films to brush up their skills and keep themselves busy | Amey Mansabdar

Though childhood cancers account for just 4 per cent of all cancers and are largely curable, a lot of children find it tough to lead a normal life post treatment. “Some parents become too paranoid and do not let their children continue school after they go back, thinking they are too weak,” says Dr Shripad Banavali, professor and head of department of medical and paediatric oncology at Tata Memorial Hospital. “Sometimes, schools refuse to take in these children because other parents object, thinking it is an infectious disease. The surgical mask, which these children often wear to protect themselves from the infection-causing microbes in the air, adds to the stigma.”

Some children were too disheartened or had lost interest in studies after the treatment. So, CanKids came up with the idea of setting up a school in the hospital itself. Because of paucity of space, however, the classes are held in the two rooms. “There are studies which show that if children are stimulated during the treatment, it leads to a better outcome,” says Banavali.

So, hospitals are taking special care in designing the outpatient department for paediatric oncology in a more lively and engaging manner. At the paediatric oncology department of Tata Memorial Hospital, for instance, while the passage to the OPD is crowded with parents clutching their kids and their reports, from a corner, one could hear the sound of laughter and cheer. Around 25 children between age 2 and 15 were watching a video on birds in rapt attention while another group was busy going through a story book on birds in Hindi.

For the past seven months, teachers from Mindsprings, an educational consultancy, have been visiting the OPD for two hours—from 10:30am to 12:30pm—and keeping the children busy with stories, songs, crafts and films. “The idea is to not burden them with academics but to stimulate their minds so that they continue their education after the treatment,” says Priya Iyer, project manager, Mindsprings. So, the stories have been interspersed with maths problems, science concepts, vocabulary lessons and arts. Even if the children come from a vernacular medium, the nonverbal methods used help them to connect with the lesson.

They also hold activity sessions involving origami or crafts like making bird masks. For children who are too tired or sick to play, simple activities like colouring pictures are there. “Initially, we wondered how we would teach these kids who are undergoing cancer treatment, but then we realised that they are like the other kids, mischievous, innocent and lovable,” says Iyer.

For Iyer, the biggest reward is when a child shows interest in going back to school after the treatment. Rohan Patil, 13, is undergoing treatment for blood cancer. Thanks to the sessions by Mindsprings, Patil says his English and maths skills have improved considerably. He cannot wait to return to his hometown Dhule in Maharashtra and get back to school.