Hubris: Why Economists Failed to Predict the Crisis and How to Avoid the Next One

Meghnad Desai wears several hats. He is a member of the House of Lords in the UK, a keen observer of Indian politics and an author. But he is, first and foremost, an economist who has provided the world fascinating insights into topics like globalisation and the revival of socialism.

In Hubris, Desai unravels the reasons why economists have never been able to forecast a financial crisis. It chronicles economic history in a bid to explain the financial crisis of 2008. Desai’s riveting narration and stimulating anecdotes make the book an interesting read.

For most of the past 200 years, writes Desai, it was lack of government intervention that ensured stable economies. But, after the Wall Street crash of 1929, the Keynesian theory on the state’s role in ensuring economic equilibrium gained credence. But the theory fell flat on its face for failing to fight stagflation and prevent the crisis of the 1970s. It marked the return of the classical theory—revamped, improved and decidedly pro-market.

For a while, says Desai, it seemed that the good times would last forever. This ‘hubris’ provided the world a false sense of security. When the 2008 crisis struck, economists were caught by surprise. Only Raghuram Rajan, then chief economist of the International Monetary Fund, had predicted the crisis in 2005. But he was called a luddite. 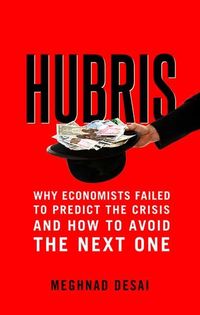 The last part of the book looks at the future. Desai says developed economies are caught in a downward phase. But there is some positive news for India. “India has slowdown in growth, but is expected to bounce back to its previous rate of around 7-8 per cent and may grow even faster if it uses its demographic dividend,” he says.

Desai argues that capitalism is here to stay. “The death of capitalism has been foretold many times, and yet it lives on,” he says. “That perhaps may be the only certainty that we can rely on.”

Hubris: Why Economists Failed to Predict the Crisis and How to Avoid the Next One
By Meghnad Desai
Published by HarperCollins
Price Rs399; pages 287