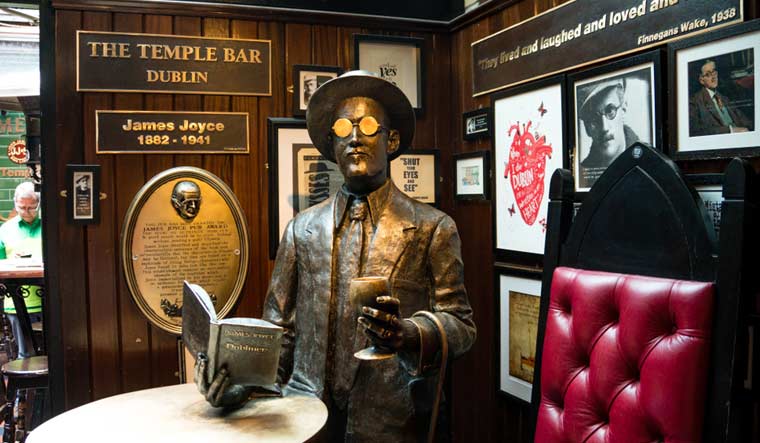 In James Joyce's novel, A Portrait of the Artist as a Young Man ,the protagonist Stephen Dedalus is disciplined for not doing his lessons at school. The cruel teacher does not believe Stephen when he explains that he broke his glasses and hence could not see. This episode from the book was taken straight from the life of the Irish novelist who from 1917 to 1935 underwent 25 different eye operations. He often depended on friends to take dictation to meet deadlines. One of the reasons it took him long to finish his books was because of his poor eyesight.

After seven years of labouring over his 1922 masterpiece Ulysses—which parallels Homer's Odyssey in its design—Joyce had a case of glaucoma.

On the 100th year of Ulysses' publication, Joyce's lifelong struggle with his vision is mounted as a reminder in a special travelling exhibition on the novelist at the Delhi Public Library. Held in collaboration with the Embassy of Ireland, the exhibition takes viewers through a swirl of information on Joyce's life and legacy, from his family life to his influences in college to his wanderings in Trieste, Rome, Zurich and Paris and the importance of Ulysses. The modernist classic follows the encounters and engagements of an advertising canvasser Leopold Bloom over the course of an ordinary day in Dublin on 16 June 1904, its narrative arc stretching over 700 pages. T.S. Eliot once described Ulysses to be “the most important expression which this present age has found,” and a “book to which we are all indebted, and from which none of us can escape.”

Since the day of its publication, June 16 is celebrated the world over by Joyce enthusiasts as Bloomsday. Joceans honour the memory of the author on this day with readings and re-enactments, decked-out in Edwardian gear with britches and braces. They relish Irish delicacies inspired by the book with a spread that often includes "thick giblet soup, nutty gizzards, a stuffed roast heart."

As 2022 Bloomsday coincides with the centenary year of the publication of Ulysses, the exhibition at DPL assumes special significance. Some 100 copies of books written by Joyce, including Dubliners and A Portrait of an Artist as a Young Man apart from Ulysses itself will be given away to interested readers across branches of DPL.

"One of the reasons why we decided to partner with Delhi Public Library is because, as you say, it is open to a very wide range of people from all social, educational and income categories. And we're making about 100 of Joyce's books available to participants and visitors to the library this week. So we hope it will be well received," said Brendan Ward, the ambassador of Ireland to India while inaugurating the exhibition with Subhash Chander Kankheri, chairman of the Delhi Public Library.

Set up in 1951, Delhi Public Library has more than 35 branches and over 150 mobile service points spread across the national capital region. With an annual membership fee of Rs 100, the library has a total collection of 16,84,000 books, 50 percent of which are in Hindi and the rest in other different languages like Punjabi, Urdu, etc. There are 10,000 English literature books across all units of DPL which is a very popular space for students preparing for their public service examinations. "Joyce's greatest works, his major novels like Ulysses and Finnegans Wake, are probably not the easiest reads. But some of his other works such as Dubliners, or his early semi-autobiographical novel, A Portrait of the Artist as a Young Man are both fairly straightforward and enjoyable to read," said Ward on the occasion of combining Bloomsday festivities and Ulysses centenary celebrations this year. "Bloomsday is an event for all Joyce enthusiasts. It doesn't have to be an Irish event. It doesn't have to be run by the Irish embassy or the consulate. Anyone with an interest in literature can themselves organize an event. And they'll get lots and lots of ideas by just looking online at the other events which take place around the world."