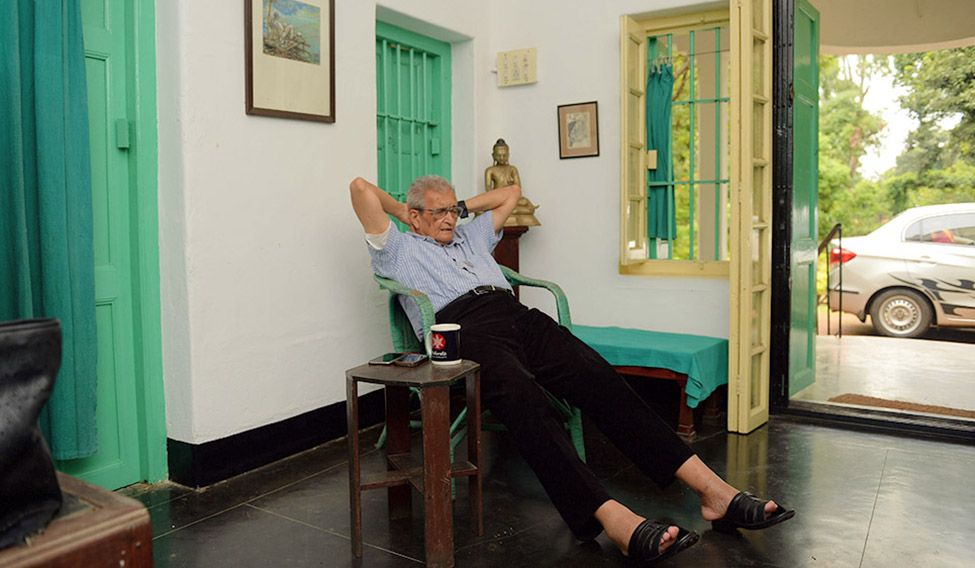 Amartya Sen at his home in Santiniketan | Salil Bera

Wednesday is holiday at Santiniketan, a small town in Birbhum district in West Bengal. It is the day to observe diksha divas or initiation into Brahmoism, a religious movement started by Debendranath Tagore, Rabindranath Tagore’s father. Visva-Bharati University is closed, and so are most shops in the area.

It is raining relentlessly as we drive to ‘Pratichi’, Nobel laureate Amartya Sen’s ancestral home. A bungalow overlooking an expansive garden, Pratichi looks inviting. We are served lal cha (liquor tea) as we wait for Sen.

It was Rabindranath who gave Sen his first name, which means ‘immortal’. A framed, handwritten citation, which Rabindranath gave to Sen’s mother, Amita, on her wedding day, hangs on the wall. Aides and domestic helps bustle about the house. A man on a bicycle brings the day’s catch. Time almost stands still, and for a moment, it seems Rabindranath himself could walk in any time.

“I had been out for a walk and got caught in the rain,” says Sen, smiling as he walks in to greet us. His knees do not permit him to pedal around Santiniketan as he once did. He is in a pleasant mood, in spite of the controversy surrounding his ouster from Nalanda University and his latest book, The Country of First Boys: And Other Essays, out next month.

The din he created on being forced to step down as chancellor of the university ensured that George Yeo, member of the Nalanda University governing board and former Singapore foreign minister, was chosen as his successor, instead of a “hindutva” person. The furore, however, cost Sen precious time to work on his next book, an expanded edition of Collective Choice and Social Welfare.

A strong critic of Prime Minister Narendra Modi, Sen has accused the government of clamping down on academic freedom and imposing hindutva ideology on institutions that should otherwise be autonomous. Under Modi, says Sen, government intervention “is much more extensive, politically organised and connected with the hindutva movement.”

Sen wants the Modi government to give importance to education and health care. “The Modi government has spent far too little on education and health care,” says Sen. “It has done very little for immunisation; India ranks one of the lowest in the world [in vaccination coverage]. Furthermore, Gujarat is one of the worst performers; in fact, way below Bihar, which shows that the BJP thinking, which is very Gujarat-dominated, has not gone in the direction of immunisation.”

According to Sen, Modi and his government have resorted to hollow sloganeering when it comes to health care and education. “I think one has to distinguish between slogan and action. In order to run programmes such as ‘Beti Bachao, Beti Padhao’, you need to have an understanding of development, which is not [based on] the Gujarat model,” he says.

Jean Drèze, Sen’s friend and former member of the National Advisory Council, joins us for a simple, yet scrumptious, Bengali lunch of fish head curry, batter-fried fish oil nuggets, vegetables and rice. Sen regales his guests with anecdotes of his stint as the master of Trinity College, Cambridge, where neither religion nor government curbed academic freedom. Nabaneeta Dev Sen, Sen’s former wife, drops in for tea.

Sen’s stint in India is coming to an end; it is time to return to Harvard. But he will be back soon—he visits India five times a year, and spends a couple of months at Santiniketan. “It is my favoured place for everything—walking, talking, writing, listening to music… everything,” he says, smiling.

How do you perceive the NDA government’s decision to popularise Sanskrit?

I am in favour of learning some classical languages. Sanskrit, instead of some other classical language, is not what I am arguing for. Of course, it is now easier to arrange scholarship for it in India than for Latin or Chinese. Sanskrit literature is massive. And, by that, I don’t mean religious texts; it includes atheistic and agnostic literature.

You have talked about the need for good education and primary health care. The Modi government has slashed spending for both.

It is not just this government, even the last government was terrible. The neglect of the need for the state to get everyone schooled and literate, and getting everyone some kind of health cover began much earlier during the time of [Jawaharlal] Nehru. If you look at the Five-Year Plan, there were statements that education and health were top priorities, but not much was done. The entire tradition of Indian planning, of ignoring education and health care, continued through Indira Gandhi’s time, the Janata Party government and, later, through the BJP government and UPA I and II. Now, with Modi, it has got worse, because the government has made further cuts.

You have spoken about how Kerala has achieved success in terms of literacy and public health care, compared with states such as Gujarat and Madhya Pradesh.

You can deliver education and health care to all, even with a very poor economy, because a poor economy is also a low-wage economy, and education and health care are labour-intensive. So, first, it is affordable; and second, it will immediately have an impact on quality of life, infant mortality, etc. And, if you push money towards complete immunisation, it would lead to a better standard of living. Third, it would also improve the productivity of labour, because you can’t become an industrial giant with an unhealthy, uneducated labour force. Ultimately, improvement in the quality of labour has an effect on economic growth.

You are often called to comment on Modi, but what about Mamata Banerjee? Do you see the poribortan [change] that the West Bengal chief minister promised?

I have been quite critical of Mamata, and I have been quite critical of Modi. But I must say that there is a distinction between them, because immediately after winning, Mamata wanted to host a welcome tea for me at the Writers’ Building. I told her that I don’t go to the Writers’ Building, because I grew up in British India and the Writers’ Building is an evil sight (laughs). So she gave me tea in the Town Hall. She was very nice. And, when a TV journalist asked me whether I had congratulated her, she answered before I could: ‘That is not the question I want to ask,’ she said. ‘I want to ask: is he going to help me?’ That is a totally different attitude from that of Modi, which is to say: now that I have won, I am going to take you out of any position that you happen to hold.

What are the chances for the Left under Sitaram Yechury?

The communist party was badly led at the Centre. The West Bengal faction often differed from it, but did not actively exercise its influence. It became difficult for the communist party to speak in two voices in Kolkata and Delhi. The party still has not been able to regroup.

They have to regroup, because it is a party for which there is a space in India. In Yechury, they have a better leader now. They now need to pick the right issues and have appropriate policies. To some extent, they were constrained by bad leadership in Delhi, though, personally, [Prakash] Karat is very likeable.

Do you feel that the current government has repackaged old UPA schemes? 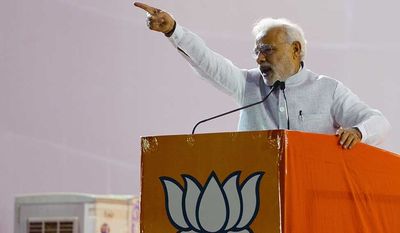 That is a political way of putting it, which, perhaps, Rahul Gandhi should say (laughs). I would say the Modi government has not brought about any change. It has spent far too little on education and health care, and hardly any time on organisation of schooling and health care. They have done very little for immunisation; India ranks one of the lowest in the world [in vaccination coverage]. Furthermore, Gujarat is one of the worst performers; in fact, way below Bihar, which shows that the BJP thinking, which is very Gujarat-dominated, has not gone in the direction of immunisation, unlike Bangladesh, which has gone for total immunisation.

Modi’s imagination doesn’t quite go in that direction. He has been quite imaginative in diplomacy. He has rebuilt relations with other countries, including China. On the other hand, they [BJP leaders] are too tied up with the Gujarat model, which is physical capital and easy business, while ignoring human capital and capability, and gender inequality.

These are slogans. How much money and effort has Modi spent on the programmes? He has also said that every house should have a toilet. What has happened to that? One has to distinguish between slogan and action.

Even industry isn’t quite as euphoric as before.

I do believe that India needs more economic reforms. Business is still very hard to do. When I was in charge of Nalanda [University], any change there needed the approval of six different ministries.

How was your experience of running Nalanda University?

Modi succeeded in ousting me partly because of me. The moment it became clear that they did not want to go along with the unanimous decision of the governing board, I had to think what would be the right thing for me to do. The government was using its formal power for substantive control. When I was appointed master of Trinity College and got a letter from the Queen, I did not think the Queen had spent time thinking who would be the best master of Trinity College. I don’t think Pranab Mukherjee would have been opposed to my continuing [as Nalanda University chancellor].

But the government said he could not approve of the board’s decision. The board members were keen to fight. I decided that it made no sense, because, even if I succeeded in staying on as chancellor, I would face the same hostility. So I concentrated on ensuring that none of the hindutva kind became chancellor.

We have a good alternative in George Yeo, a Singaporean who is very involved with Asia, has knowledge about India and has been actively involved with Nalanda University from the beginning. He was keen that I continue as chancellor, but I told him that he should be chancellor and that I was moving away in the best interest of the university. But he had to make sure that he does not have [government] interference of the kind that I have had. He accepted the post only after getting a guarantee from the Minister of External Affairs [Sushma Swaraj].

There were allegations of extravagant spending of Rs2,700 crore in the name of the university.

That is a lie. I don’t know how they got that figure. We spent 046 crore from the beginning of the university to now, and this covered all expenses, including temporary quarters, housing for faculty, and so on. But this [Rs2,700 crore] is a lie.

You have said that government interference in academia is a worrying sign.

Earlier governments, too, confused one model with the other. I believe they did it sporadically, and there was a kind of transgression. That is not new. What is new is that this [interference] has become much more extensive, much more politically organised and connected with the hindutva movement; and it is at a scale that dwarfs previous history.