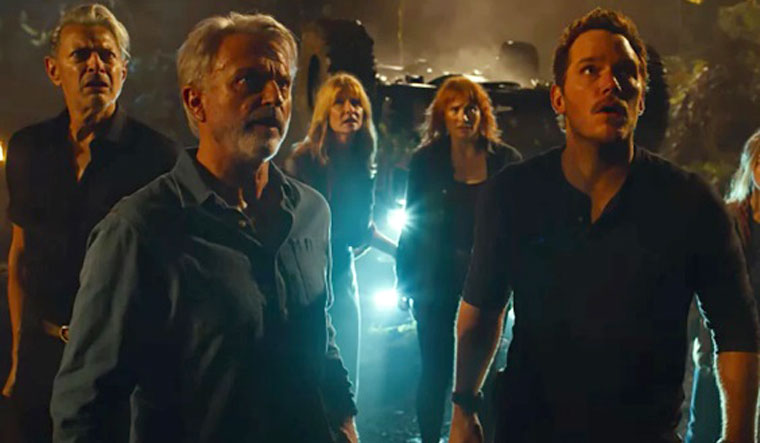 In Colin Trevorrow's Jurassic World Dominion, this becomes almost a rhetorical question! In this 'multiverse dinosaur-verse', every other character, old and new, seem to be asking each other this. The audience cannot be blamed if they too follow suit after watching this third (and probably, final) film in the Jurassic World series, and sixth overall in the Jurassic franchise.

Jurassic World Dominion picks up from where the last film ended – the proclamation of a neo-Jurassic Age, where humans and dinosaurs have to coexist, though not always peacefully. But, this time, they have more than just dinosaurs to worry about. It might sound promising and even exciting.

But the longer and harder you stretch something, the more likely it is to break. Film franchises are no different, and the dinosaur-verse suffers from just that. The 1993 classic Jurassic Park is part of cinematic folklore. Of course, it had the novelty factor, which worked in its favour. But the science fiction-adventure-drama, directed by Steven Spielberg, had a solid storyline, too, and was aided by some great performances.

Sadly, everything went downhill from thereon. The Lost World (1997) was better when compared to what came next – Jurassic Park III (2001), which was an absolute disaster. The dinosaur-verse got a fresh lease of life 14 years later, with Jurassic World, and then Jurassic World: Fallen Kingdom (2018). They had better VFX and meaner dinosaurs, but the WOW factor remained elusive.

So what does Trevorrow do? With multiverse being the buzz word now, Jurassic World Dominion decided to bring the two Jurassic eras together – the iconic old cast with the new. But can nostalgia alone save a film? Agreed it's a delight to watch Alan Grant (Sam Neill), Ellie Sattler (Laura Dern) and Ian Malcolm (Jeff Goldblum), working in tandem with the young brigade of Owen Grady (Chris Pratt) and Claire Dearing (Bryce Dallas Howard). But where's the plot to hold all these characters and the several threads that the film explores, together? The film is all over the place. Literally. It takes a while to wrap your head around the locations where the film travels to and what happens at each of these places. Things and people just fall into place conveniently. To a point that it becomes almost boring, and a trifle irritating. Lazy writing is the film's biggest letdown.

Dinosaurs, too, fail to save this film. There are no creatures here that strike fear in you or make you sit up and take notice. Jump scares don't work anymore. Neither do the dinosaur-chasing-the-hero scenes, where the protagonist manages to cheat certain death at the last moment. Jurassic World Dominion has these in dollops. The highlight, though, was the bike chase, where the dinosaurs' parkour skills are put to test!