The Greek tragedy may not be ours, but India has to keep a close watch

In 2008, when the US subprime loans pulled down economies around the world, India survived. It was not a miracle; premeditated moves helped the Indian economy avert a crisis. Seven years later, as the world is staring at another possible crisis after Greece defaulted on a ¤1.5 billion payment to the International Monetary Fund (IMF), is India prepared to face it?

The Greek crisis does not come as a surprise. It is the outcome of months of failed negotiations on a bailout deal. “The market is prepared for the Greek crisis. In 2008, everyone was caught off guard and the magnitude of crisis was huge compared to the current crisis,” said Devendra Kumar Pant, chief economist and senior director, India Ratings & Research.

India’s financial mandarins insist that the economy's fundamentals are strong. As on June 19, India's foreign exchange reserve was $355.5 billion. When the 2008 crisis unfolded it was only $292 billion. Even though Europe is India’s largest trading partner, with trade value worth $129 billion, its direct exposure to Greece is insignificant. In 2014-15, India exported goods worth $49.3 billion (15.9 per cent of its total exports) to the EU and imported goods worth $48.3 billion (10.8 per cent of its total imports). India mainly exports petroleum products, textiles, apparels, footwear, gems and jewellery, machinery and transport, and imports machinery, gems and jewellery, chemical products and transport equipment. Still, India is not a significant trading partner for the EU—the imports from India account for just 2.2 per cent of the total, while its exports to India are only 2.1 per cent.

And, Greece, with its 2 per cent GDP share in the eurozone, is a tiny bit in the European Union economy. A major chunk of Greece’s public debt, about 60 per cent, is owed to official bodies. Private debt is just about 16 per cent. Therefore, even if Greece falls, the tremors are unlikely to reach India. “Our macro-fundamentals are strong, current account deficit is under control, foreign exchange reserves have touched a record high and rupee continues to be stable. All of these provide the economy with the requisite strength to withstand any adverse fallout from the Greece crisis,” said Chandrajit Banerjee, director general, Confederation of Indian Industry.

But, if interest rates are tightened in Europe, it could be a problem. Finance ministry has already rung the alarm bells. “In case of firming up of interest rates in Europe, there can be outflow of capital from India,” said finance secretary Rajiv Mehrishi. 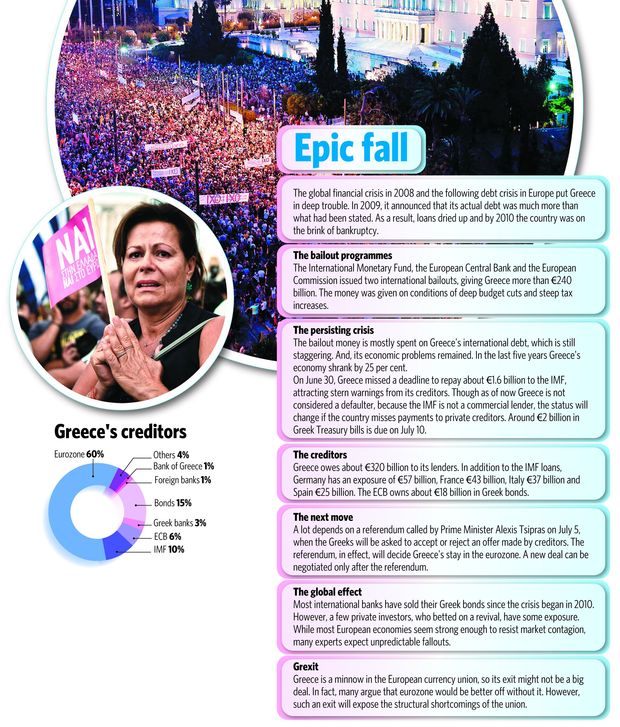 The finance ministry and the Reserve Bank of India are in constant touch as they monitor the Greek-e urozone fallout; a throwback to 2008 when numerous telephone calls were exchanged between the ministry and the RBI. In 2008, bureaucratic protocol was bypassed and the goings-on were rather 'unorthodox'. Planning Commission chairman Montek Singh Ahluwalia regularly updated Prime Minister Manmohan Singh, and Finance Minister P. Chidambaram scavenged for advice from various quarters on tiding over the crisis. RBI Governor D. Subbarao released 24.6 lakh crore to bring greater liquidity to the system. A team effort by the government and the RBI saved the country from economic doom.

It was Y.V. Reddy, Subbarao’s predecessor, who had put in place the first safeguards. Reddy had realised that India was entering a real estate bubble. He asked banks not to finance land purchases. The use of securitisations and derivatives were reduced, interest rates were ramped up and cash reserve ratio, or capital reserves that banks are expected to hold, was doubled. These early security walls prevented the economy from getting tangled in the global mess.

Finance Minister Arun Jaitley may not be as pushy as Chidambaram and the Greek drama may not embroil India too much, but, sources say he is watching how the crisis unfolds. “Over the last year, the government has taken many path-breaking initiatives aimed at resolving the macro-economic imbalances, which would provide a positive momentum to growth, going forward,” said Banerjee.

In the eventuality of a meltdown, and if interest rates are tightened in Europe, the RBI will have to resort to monetary easing to pump in more money into the system. For now, the central bank is hawkish on the rupee. The dollar is likely to appreciate against the euro and the RBI will have to support the rupee. There is a word of caution from former RBI deputy governor K.C. Chakrabarty: “We should be clear about the quality of our reserves, which right now is borrowed money. Do not allow the outflow of the dollar and provide stimulus through accommodative monetary policy.”