Rising prices have made a big impact on consumer demand

When Covid-19 and lockdowns ravaged the economies in the past two years, central banks all over the world sprang into action to hold them together. Interest rates were slashed to record lows to ensure liquidity in the system. So much so that you could get a home loan for an interest rate of 6.5 per cent a year.

The low interest rate party, however, could well and truly be over, as supply-side challenges and the Russia-Ukraine conflict have fuelled inflation to record highs. India’s retail inflation in April surged to 7.79 per cent, its highest level since May 2014. In March, it was 6.95 per cent; and a year ago, just 4.23 per cent.

Worried that it may be falling behind the curve, the Reserve Bank of India, like most central banks, has shifted its stance from reviving growth to taming inflation. Since May, the RBI has raised the repo rate by 90 basis points, from 4 per cent to 4.9 per cent. Repo rate is the rate at which the central banks lend to commercial banks and it has a bearing on the lending rates of banks. Most banks reacted to the RBI action by raising their lending rates. Home loan rates have risen above 7 per cent.

High crude oil prices is a major reason for the nagging inflation. Over the past few months, crude prices have jumped to around $120 a barrel, driving retail petrol and diesel prices to record highs. Global supply chain glitches have pushed up the prices of many other commodities as well. The disruption in exports from Ukraine and Russia has affected the prices of essentials like cooking oil and wheat.

The rising prices have made a big impact on consumer demand; people have either reduced consumption or are downtrading (shifting to lower priced products). A recent report by NielsenIQ said sales volumes in rural markets fell by 5.3 per cent in January-March quarter, and in urban markets by 3.2 per cent.

Madan Sabnavis, chief economist at Bank of Baroda, said the rate hikes were necessary to tame prices as India was a domestic-oriented economy. “If the interest rates are kept where they are, all of us will be buying more houses and other things, which will push up the demand for products like cement and steel. This will accelerate inflation. So, monetary policy is like a speed-breaker, which is required to ensure prices do not accelerate,” he said.

Even after the two consecutive hikes, the repo rate is below the pre-pandemic 5.15 per cent. Economists see the RBI raising rates further. Global credit ratings agency Fitch says the repo rate may go as high as 6.15 per cent by financial year 2024.

Higher interest rates, however, will have an impact on the economic growth, which, alarmingly, remains slow. India’s GDP grew a good-looking 8.7 per cent in 2021-22, but that was on a very low base (the GDP had contracted 6.6 per cent in 2020-21). The quarterly trends also show growth slowing down, from 20.1 per cent in April-June to 8.4 per cent in July-September, 5.4 per cent in October-December, and 4.1 per cent in January-March.

The World Bank has lowered India’s growth forecast from 8 per cent to 7.5 per cent in the fiscal year 2022-23. Fitch, too, lowered its GDP growth expectations to 7.8 per cent from 8.5 per cent. RBI itself is expecting a 7.2 per cent GDP growth this year.

Small enterprises, which were hit hard by the pandemic, might see stress levels go up as interest rates rise, said Sabnavis. “What we have seen in the past is interest rate is not a limiting factor for large companies. But, small and medium enterprises are going to be hit badly. Most of their loans are linked to external benchmark. So, their costs will go up and they will have to be monitored,” he said.

For central banks, it is like being between a rock and a hard place. “You cannot bring down food prices only by monetary policy action,” said Suman Chowdhury, chief analytical officer at Acuite Ratings and Research. “So, there has to be steps taken by the government.”

The government has already taken a few measures. In May, it reduced central excise duty by Rs8 a litre on petrol and Rs6 a litre on diesel. It is giving a subsidy of Rs200 for a cylinder of cooking gas (up to 12 cylinders) to the nine crore beneficiaries of the Pradhan Mantri Ujjwala Yojana. The government has exempted customs duty on importing two million tonnes of crude soybean and sunflower oil a year. It also imposed restrictions on export of wheat and sugar to regulate domestic prices. Import duty on several raw materials was also reduced.

Helped by strong tax collections, India was able to contain fiscal deficit last year at 6.7 per cent of the GDP, lower than the revised budget estimate of 6.9 per cent. However, the duty cuts will weigh on the fiscal deficit this year, said M. Govinda Rao, member of the I4th Finance Commission.

The centre has projected a fiscal deficit of 6.4 per cent for 2022-23. Add to it around 3.5 per cent at the state-level, the fiscal deficit will almost touch 10 per cent. “So, there is hardly any monetary policy space, there is hardly any fiscal policy space. That will impact the economic recovery as well as inflation. How exactly are they going to tackle it is a major policy dilemma. They will have to do a lot of tightrope walking,” said Rao.

For now, economists expect the RBI to frontload the interest rate hikes in the first half of the financial year (April-September) and then wait and watch depending on how inflation pans out. “Unlike the developed economies, I don’t see our rate hikes being aggressive,” said Chowdhury. “It will be measured.” 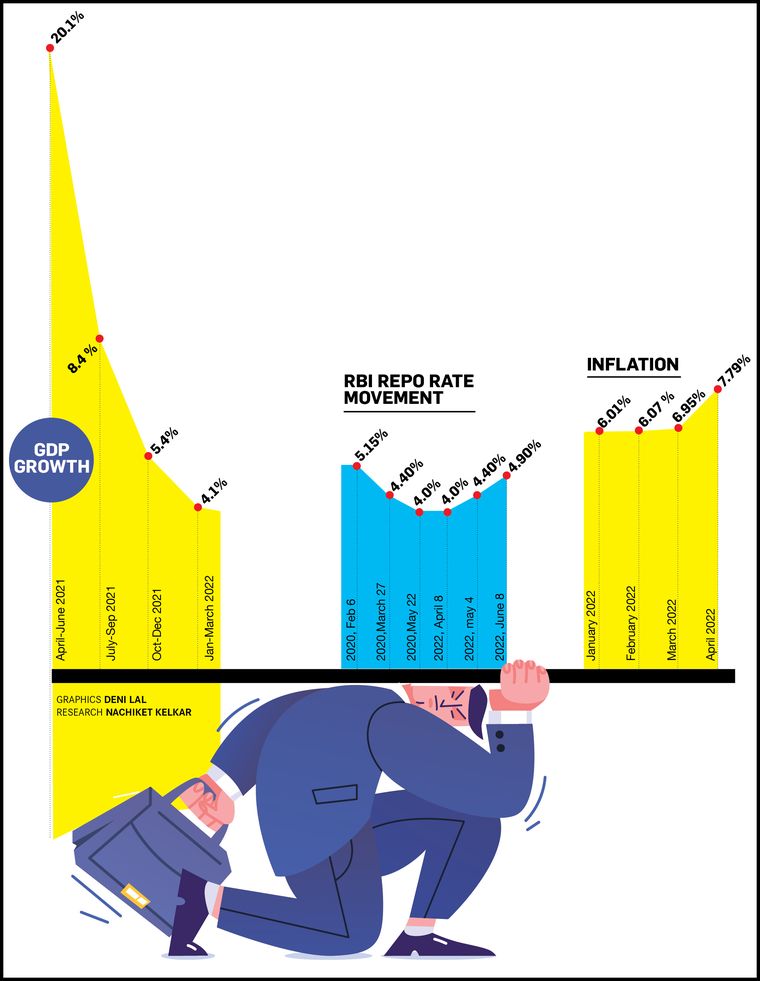