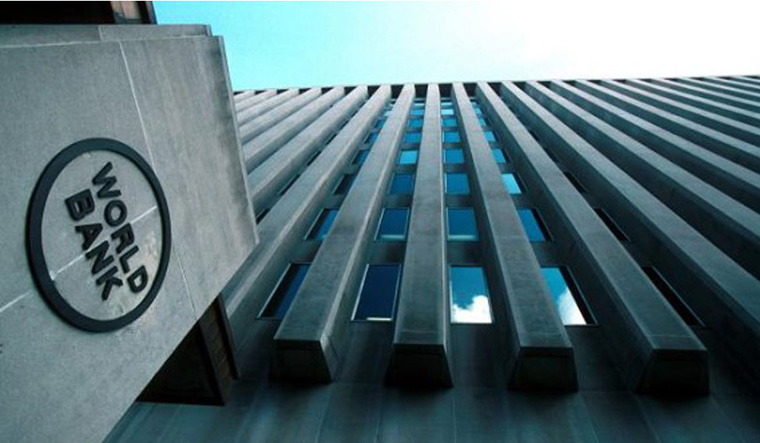 This is the second time that the World Bank has revised its GDP growth forecast for India in the current fiscal 2022-23 (April 2022 to March 2023). In April, it had trimmed the forecast from 8.7 per cent to 8 per cent and now it is projected at 7.5 per cent.

"In India, growth is forecast to edge down to 7.5 per cent in the fiscal year 2022/23, with headwinds from rising inflation, supply chain disruptions, and geopolitical tensions offsetting buoyancy in the recovery of services consumption from the pandemic," the World Bank said in its latest issue of the 'Global Economic Prospects'.

Growth, it said, will also be supported by fixed investment undertaken by the private sector and by the government, which has introduced incentives and reforms to improve the business climate. This forecast reflects a 1.2 percentage point downward revision of growth from the January projection, the bank added.

"Growth is expected to slow further to 7.1 percent in 2023-24 back towards its longer-run potential," it noted.

A rise in prices across all items from fuel to vegetables and cooking oil pushed WPI or wholesale price-based inflation to a record high of 15.08 per cent in April and retail inflation to a near eight-year high of 7.79 per cent.

High inflation prompted the Reserve Bank to hold an unscheduled meeting to raise the benchmark interest rate by 40 basis points to 4.40 per cent last month and another hike is expected on Wednesday.

Prior to the World Bank's action, global rating agencies too had slashed India's economic growth forecast. Last month, Moody's Investors Service trimmed the GDP projection to 8.8 per cent for the calendar year 2022 from 9.1 per cent earlier, citing high inflation.

Asian Development Bank (ADB) has pegged India's growth at 7.5 per cent, while RBI in April cut the forecast to 7.2 per cent from 7.8 per cent amid volatile crude oil prices and supply chain disruptions due to the ongoing Russia-Ukraine war.

According to the World Bank report, growth in India slowed in the first half of 2022 as activity was disrupted both by a surge in Covid-19 cases, accompanied by more-targeted mobility restrictions and by the war in Ukraine. The recovery is facing headwinds from rising inflation.

The unemployment rate has declined to levels seen prior to the pandemic, but the labour force participation rate remains below pre-pandemic levels and workers have shifted to lower-paying jobs.

In India, the focus of government spending has shifted toward infrastructure investment, labour regulations are being simplified, underperforming state-owned assets are being privatised, and the logistics sector is expected to be modernized and integrated, the bank said.

World Bank president David Malpas, in his foreword to the report, said after multiple crises, long-term prosperity will depend on returning to faster growth and a more stable, rules-based policy environment.

"There is good reason to expect that, once the war in Ukraine stops, efforts will redouble, including by the World Bank Group, to rebuild the Ukrainian economy and revive global growth."

Global growth is expected to slow sharply from 5.7 per cent in 2021 to 2.9 per cent this year. "This also reflects a nearly one-third cut to our January 2022 forecast for this year of 4.1 per cent," he said.

"The surge in energy and food prices, along with the supply and trade disruptions triggered by the war in Ukraine and the necessary interest-rate normalization now underway, account for most of the downgrade," Malpass added.