International Booker: Who is Daisy Rockwell, the American who translated Geetanjali Shree's Hindi novel into English 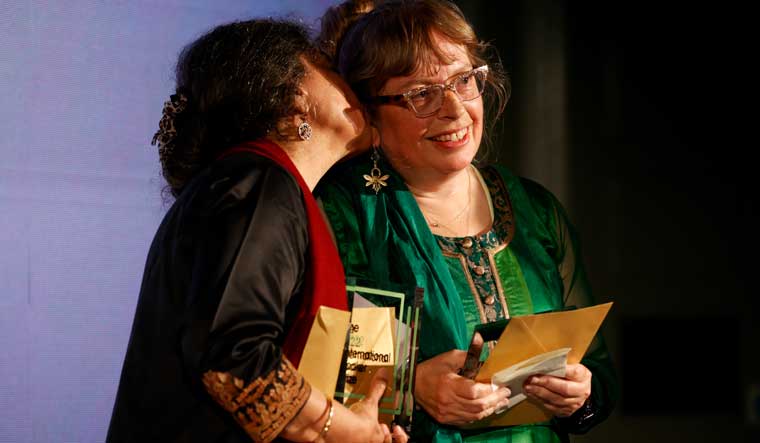 On Friday morning, Indians were looking up names of two women on the internet—Geetanjali Shree and Daisy Rockwell. Shree, a writer, had scripted history by bagging the International Booker Prize for her novel Tomb of Sand. Originally published as Ret Samadhi in Hindi, the book was translated into English by Rockwell, making it the first in any Indian language to win the prestigious award.

“We were captivated by the power, the poignancy and the playfulness of Tomb of Sand, Geetanjali Shree’s polyphonic novel of identity and belonging, in Daisy Rockwell’s exuberant, coruscating translation. This is a luminous novel of India and Partition, but one whose spellbinding brio and fierce compassion weaves youth and age, male and female, family and nation into a kaleidoscopic whole,” the jury remarked while announcing the winner on Friday.

Who is Geetanjali Shree?

Hindi novelist and short story writer Shree, 64, was born in Uttar Pradesh's Mainpuri, and is currently based in New Delhi. A recipient of several awards, her works have been translated into several other languages like French, German, Korean and Serbian. Her novel Mai was shortlisted for the Crossword Book Award in 2000. Ret Samadhi, published in 2018, is her fifth novel. She has also been the recipient of the Indu Sharma Katha Samman award, according to reports.

The book's 80-year-old protagonist, Ma, to her family's consternation, insists on travelling to Pakistan after the death of her husbnad, simultaneously confronting the unresolved trauma of her teenage experiences of Partition, and re-evaluating what it means to be a mother, a daughter, a woman and a feminist.

“There is a melancholy satisfaction in the award going to it. Ret Samadhi/Tomb of Sand is an elegy for the world we inhabit, a lasting energy that retains hope in the face of impending doom. The Booker will surely take it to many more people than it would have reached otherwise; that should do the book no harm,” she said in her acceptance speech. “But behind me and this book lies a rich and flourishing literary tradition in Hindi, and in other South Asian languages. World literature will be the richer for knowing some of the finest writers in these languages. The vocabulary of life will increase from such an interaction,” she said.

Who is Daisy Rockwell?

Rockwell, a painter, writer and translator living in Vermont, US, described the novel she described as a “love letter to the Hindi language”. Rockwell started being interested in translation in graduate school, when she began her doctorate in South Asian studies. And by now, Rockwell has translated some of Hindi literature's finest works into English, besides Shree's novel. Rockwell is the translator of Hats and Doctors, a collection of short stories by the Hindi writer Upendranath Ashk, as well as of Ashk’s famous novel, Girti Diwarein.

Speaking to THE WEEK about a passage that took her the longest to translate in Shree's Ret Samadhi, Rockwell said: “It's a passage in which the human brain is compared to a jalebi. It was just so unimaginably hard because it's written in this kind of fun, breezy way. There's sort of a vague way in which connections are made. I can make it sound vague, too. But I have to know what's underlying it. And so Geetanjali and I had to go back and forth, again, and again, and again.”

When asked about how differently both of them approach the same language, she said: “I don't believe that what her Hindi book feels like would sound the same if I just made it sound the way she sounds in English because we don't always speak the same way in different languages. If you translate it into very standard Indian English, you can lose a lot of the simplicity or the intimacy of the original language.”