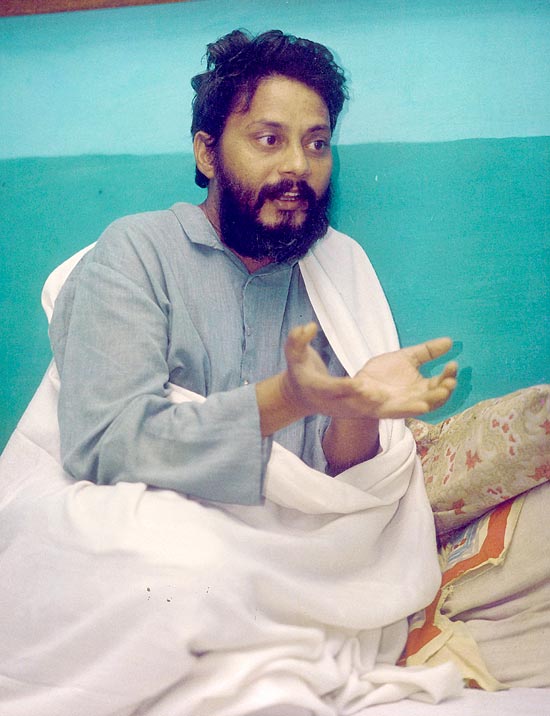 A portrait of Mahatma Gandhi has a hallowed place amid the pictures of Hindu divinities on a podium in the Tarun Bharat Sangh ashram at Kishori. Gandhian thought has influenced Rajendra Singh, who is passionate about village self-sufficiency and has mobilised a hundred peaceful satyagrahas. Yet he does not see his mission in the Gandhian mould.

Where do you draw your inspiration from?

I have not seen or met Bapu. But I have read him. I was into social work even as a child, I was in JP's movement, I understood Bhoodan. All this was my education. Gandhi is the biggest inspiration.

Any differences with Gandhi, considering that times have changed?

I don't even feel competent to comment on Gandhi. He was a Mahatma, a yugpurush, I am an ordinary man. But there are small differences. In 1909 he had the nation debate on mechanisation. But it remained a debate all his life, he could not give it a practical direction. If you say there is threat to the nation from the trains, buses, diesel, you should offer an alternative to them. Scientists of that time should have addressed that. Same goes for energy. Because of his loftiness in thought he missed some of the ground realities. We are more practical than philosophical.

Gandhi spoke of gram swaraj and ganraj but the Constitution has no place for village autonomy. Everyone used to listen to Gandhi, so he could well have got it included. Had that been done, the state of the nation would have been different today. After Independence, much has been taken from the villages, but nothing has been given to the villages. We are ordinary workers who cannot carry the ideological burden of Gandhi. But we do follow the path shown by him, and try to make people stand on their own feet.

Gandhi spoke of self-reliance in agriculture and textiles, and approached it through the charkha. It became the symbol of Independence, but he did not invent it. It was the weapon of the old mothers of our villages. Likewise we are using people's weapons. Gandhi wanted the country to learn from nature; he said nature can feed our needs, not greed. We are inspired by that. But we are not Gandhivadi. We have trees and ponds exclusively for birds and animals.

Are you more concerned with people or the environment?

TBS concentrates on society, on people, their needs. The whole debate on environment is a debate on the loot of natural resources. If our environment was okay, no one would be poor. And if the poor were okay, there wouldn't be any degradation of the environment. It is the rich, 15 per cent of our population, who pollute air and water.

They will stop it if the poor unite and tell them, ÔYou are drawing more water, you are dirtying the rivers.'

Man has become greedy, extremely materialistic. The mountains are mothers' breasts, and the river waters the milk. The first thing we do in the morning is touch the earth with reverence, out of gratitude for everything nature has given us. Man's share of the earth is just the same as that of the ant. Man has lost that humility. His lifestyle is that of a conqueror, controller of nature. That snaps our ties with nature.

Our work with water harvesting is to restore the relationship between man and nature. When we fight against displacement, we don't say the jungle belongs to man. We say there is a relationship between the man in the jungle village and the tigers in the forests, and that relationship should remain intact. The same applies to water. We love society, therefore we want to protect the environment. The two are linked. Our work is to nurture nature.

What were your greatest challenges?

One is the prevailing system, the laws which are obsolete. They do not allow the villagers to do what they want for their development. If they dig a small pond the government declares it illegal. If the village is not strong it meekly backs down. We took a lot of time to make the villages strong. The main obstruction is from the government.

How do you overcome it?

So far we have done it by slowly strengthening the villages and making government officials understand the rationale of our work. As per the Forest and Wildlife Protection Act, we could not have made the 200 water harvesting structures in Sariska National Park. But after we did it, the government appreciated it, though they had earlier served demolition notices. Some officers are sensitive and understand, most are not. But we carry on.

But you have resorted to agitations.

Yes, but we don't rely too much on agitation. We believe in using people's own weapons. When we were fighting the forest officials in Mandalvas the people in all the villages in Sariska forests decided to have akhand Ramayan to demonstrate our unity and strength. Villagers don't believe in strikes and holdups that disrupt life. All our protests were satyagrahas.

What is the source of your strength?

The moral support, trust and faith of the community here. With that we fought the mining mafia. The community stood by us when we were attacked.

What is your dream?

That the community manages its own water, forests and land in the best way. These are the biggest resources on earth and the basis of the existence. They should be managed well not only here, but along the whole Aravallis, and everywhere else.

What resistance did you face in the beginning?

When people did not know us they had no confidence in us. There was distrust because of the political system, because of the looting tendency of traders. But later the resistance was from local politicians, not ordinary people.

How is your relationship with the government now?

Not linking it with any particular political party, I will say our work has come to be recognised and appreciated. There is some fight because of corruption in the government. But they are coming to us with the idea of cooperation, as in the case of PAWDI. The society and the government are trying to get together.

When was the turning point?

After ten or eleven years of work. It took so much time maybe because the pace of work was slow. We did not take shortcuts, we faced problems in a constructive, principled manner, never compromised on truth, never started a fight.

Not even on the day I thought I would not survive. That was when we were attacked. Yes, once in a while we do worry about when and how the society will understand. But I never thought of going back to Jaipur.

What has been the model of your work?

I have no model. All this work has been developed out of the vision of the TBS. Technical people, doctors, engineers and chartered accountants came on their own, worked and went. So there is professional touch. But the real work is that of the community. All our structures are 100 per cent safe because the builders are also the users, unlike in the case of the government structures which are built to meet targets. Water harvesting has acted as a flood control as well as a drought control measure. It rained here as much as it did elsewhere in Rajasthan, there were no floods in the Alwar area.

Can this work be replicated elsewhere?

This is designed for this area. But water harvesting anywhere has to be based on the same principle. It can be done on the Vindhyachal, the Western Ghats, anywhere in the world. If harvested properly, rainwater alone can meet all our water requirements even in the cities. This can be done at a very low cost. Many people in Gujarat and Madhya Pradesh are trying it out.

Can this be the alternative to Israeli farming technology that is being adopted in India?

Those are not sustainable in India. The traditional water harvesting system is suited to our land. It is cost-effective, and capable of providing employment to our people.