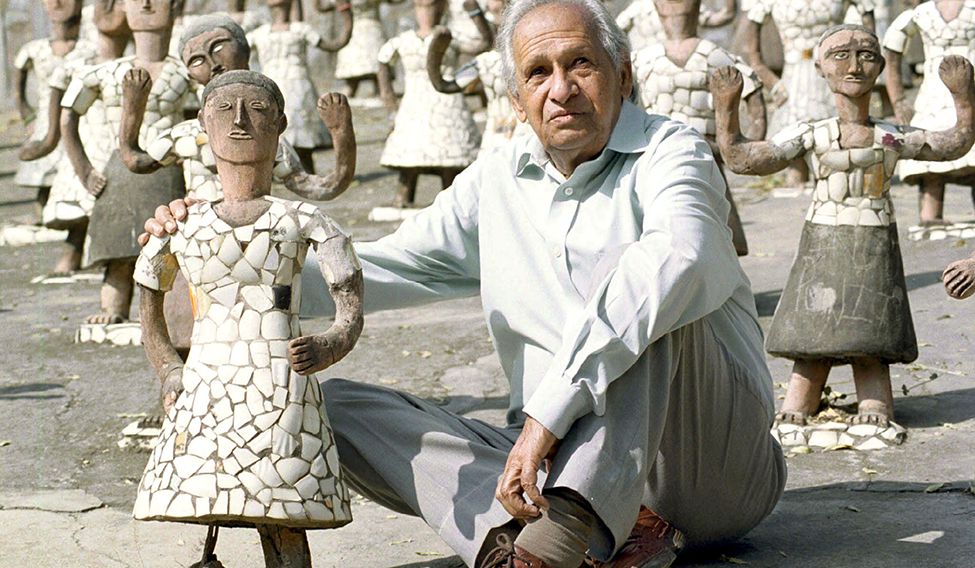 Fine art: Nek Chand among the sculptures in the Rock Garden | Reuters

Nek Chand, creator of Chandigarh's Rock Garden, has left behind an inimitable legacy

When children in Chandigarh hear the word creator, the image that flashes in their minds is of the gentle, avuncular Nek Chand, the creator of the Rock Garden. Author and art critic Nirupama Dutt describes his 40-acre wonderland as “an unplanned outburst against a very planned backdrop of the city”. This “outburst”, in Le Corbusier's Chandigarh, is an antidote to the bureaucratic look of the planned city. It is, quite possibly, the city's only must-see landmark.

But the Rock Garden, by Sukhna Lake, is not the only reason Chandigarh mourns the 90-year-old's death. He was more than an artist. For instance, when visitors wanted to see him, take a photo or get his autograph, they just had to sound a gong as they exited the garden. Out of nowhere, one of the many attendants would surface and usher them into a typical Rock Garden room, a space which was an office, a workshop and a storeroom for the artefacts Chand created. Whatever the request, he would oblige, humbly and warmly. Many lucky visitors got a long string of terracotta beads baked there in improvised furnaces. Those with whom he struck a rapport were gifted models of birds, people and characters. I got a string of beads. My husband, however, received a beautiful Krishna made with bits of steel, small patches of discarded fabric, an eye for art, deft hands and immense passion.

Though Chand received honorariums when he built mini samples of the Rock Garden in Washington and Paris, he never sold a piece of his work. He believed that doing so would reduce its value to monetary terms. When art historian Dr B.N. Goswamy was a visiting professor at Punjabi University in Patiala, he invited Nek Chand for a guest lecture. The artist arrived with a tempo full of things he had made, which he would gift to the students.

In the late 1950s, Chand, a road inspector in the engineering department, started building the garden secretly, collecting waste that the developing city left behind. He would work at night and slowly, over many years, built the garden and decorated it with sculptures made from broken bangles, ceramic fixtures and construction material. It was in the 1960s, and recycling and upscaling were unknown words.

One of the earliest visitors to the garden was Pravin Emily, from the class of 1974 at Chandigarh's Government College for Girls. She had been told that a very happening photographer couple from Bombay was coming to shoot a fashion portfolio at an outdoor location in the city. She brought along four other girls to model for the duo. Bags stuffed with jeans and hot pants, they reached the garden and had a sneak preview—it was neither named nor inaugurated at the time. The ladies still carry a chip on their shoulders; they had seen it before the world had.

But the minute Chand's labour of love was discovered, chief engineer S. Kulbir Singh wanted it demolished. His argument was that the private garden was on government land. Chand went to Dr M.S. Randhawa, the first chief commissioner of Chandigarh, who was an art lover. In 1976, Kulbir Singh inaugurated the Rock Garden, but Chand's name was not on the engraved rocks outside. When many in the city cried foul, a third, much smaller boulder was placed next to these rocks. “Designed and set up by Nek Chand”, it read.

The travails were not over. As the rock garden grew, there were concerns that, as it was made of waste, it might fall under the rush of tourists. And, during the years of militancy, there were concerns about how people would exit from the narrow alleys. At one point, the government wanted to build a road through it, but citizens, including actor Jaspal Bhatti, hugged a wall that was about to be smashed. It became clear to the administration that the garden and Nek Chand had grown so popular that nobody could think of pulling it down. It was later made a part of the Chandigarh administration's engineering department. All the structures, including manmade forests, waterfalls, hills, bridges and the amphitheatres, were strengthened using fresh material. But for many years before this, the Chandigarh tableaux at the Republic Day parade in New Delhi always had an element of the Rock Garden.

In the late 1980s, when Siddhartha Shankar Ray was the administrator of Chandigarh, Chand was given the rank of secretary and a government car. Till then, he had been cycling to the garden daily. Prime Minister Indira Gandhi awarded him the Padma Shri in 1984.

It is not every day that the Chandigarh administration declares a holiday in memory of a resident. It did that on June 12, for a son who gave the city an identity.