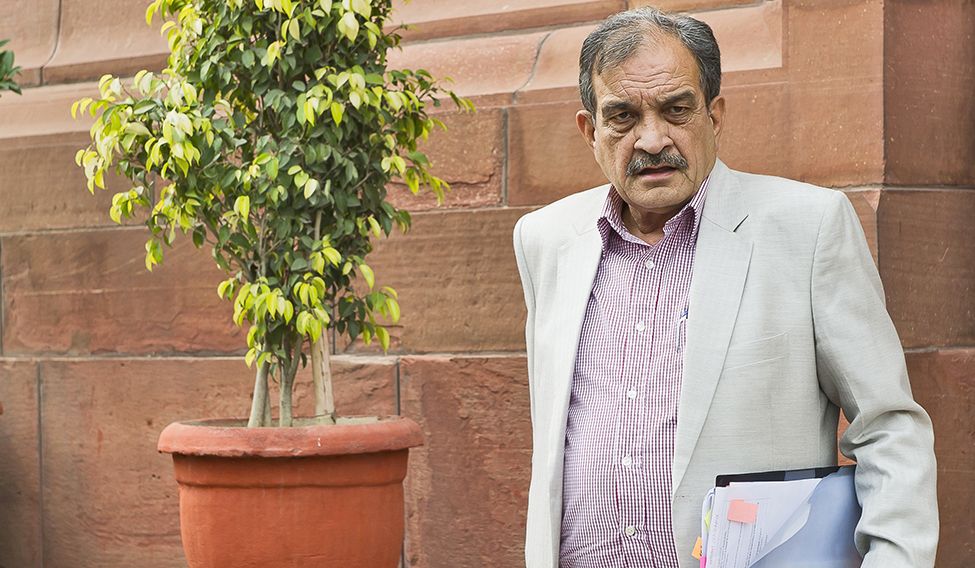 Son of the soil: Birender Singh wants farmers to have access to cheap and easy credit.

A story goes thus: ahead of the Haryana assembly polls in 1991, Rajiv Gandhi told Chaudhary Birender Singh that he would be made chief minister. Rajiv apparently thought that Singh, who was then president of the Congress in Haryana, was the best Jat leader to take on Lok Dal leader Devi Lal and his clan. The elections were held on May 20, 1991. Rajiv was assassinated in Sriperumbudur the next day, May 21.

The Congress had contested all 90 seats in Haryana; it won 51. The BJP fought in 89 seats and won two. When the time came to form a government, Singh met Sitaram Kesri, then treasurer of the Congress. Before the polls, Kesri had apparently personally received the funds Singh had raised; 1991 was also a general election year. But, when informed of Rajiv’s promise, Kesri told Singh: “Then, you go and ask him [Rajiv].” Bhajan Lal became chief minister.

And, Singh was no run-of-the-mill Jat leader. His grandfather, Sir Chotu Ram, founded the Unionist Party and pushed the AJGAR alliance―Ahirs, Jats, Gujjars and Rajputs. The master strategist would later bring Muslims into the equation and make it MAJGAR. He also pushed laws protecting farmers from moneylenders. But for Chotu Ram, old timers in Punjab say, the Bhakra Dam would never have been built.

Neither the pedigree nor his commitment stood Singh in good stead in the Congress. In 2005, when the Congress actually fielded a Jat face, Singh was passed over for Bhupinder Singh Hooda.

Singh’s confidants say “thrice he had come within millimetres of becoming chief minister of Haryana”, but lost out to the politics in the Congress high command. So, they are not surprised that the man, who does not wear religion on his sleeve, joined the Bharatiya Janata Party. They are surprised that he did not leave the Congress earlier. Singh joined the BJP in his hometown, Jind, at a grand rally organised by BJP president Amit Shah last year.

Forty days later, the 66-year-old got emotional about his days in the Congress: He said he was touched by the respect he got in the BJP. In just 40 days, the BJP had made him feel more honoured and wanted, than the Congress had done in 40 years. Sources close to him say that Singh owed this shift to his constituency. His grand plans for farmers had come to naught, because he had been fettered by the Congress, they said.

Haryana-watchers said that his joining the BJP, though on the eve of the Haryana assembly polls, was done in the manner that suited a gentleman. He attended Shah’s rally on August 16. Resigned from the Rajya Sabha on August 28, and joined the BJP the next day. He had no party to merge with the BJP, and he did not make a show of the number of followers he was taking from the Congress. He took one Congress member―Prem Lata, his wife.

In the 2014 assembly polls, Prem Lata ran on a BJP ticket from Uchana Kalan, a constituency that Singh had represented six times. Her opponent was the Indian National Lok Dal’s Dushyant Chautala, 26, Devi Lal’s great-grandson and India’s youngest MP ever. He had won the Lok Sabha polls from Hisar and was planning on becoming chief minister. Prem Lata told the voters that she was fighting for “Chaudhary saab’s honour”; she trounced Chautala by 7,480 votes.

Singh is rooted in Haryana. He graduated from Government College, Rohtak, and then graduated in law from Panjab University, Chandigarh. He did inspect the farms, like most zamindar youth. But, like the elite among them, he played cricket. He captained the college side in Rohtak in 1964-1967 and the university side in 1969-1970. His new party will have to forgive him if he says that cricket is his religion, quipped a close friend of the Singhs.

Sir Chotu Ram founded the Jat Heroes Memorial Anglo Sanskrit School to provide a mix of local culture and western education to students. An admirer of the message of the Gita, Ram encouraged students to learn Sanskrit. The family continues to be involved in the education sector. A trust named after Singh runs educational institutions, including a nursing college.

And, Singh did not know that he had landed the most challenging portfolio; the pro-farmer leader would have to defend the controversial land acquisition bill. And, he did it in style, laced with large pegs of humour, on March 10.

In the Lok Sabha, when the bill came up, he stood his ground and shot down former colleagues Jyotiraditya Scindia and Deepender Hooda. Some ministers sitting near him asked him to address the chair; others shushed them saying he was senior enough to know what he was doing. Seniors in the BJP were apparently chuffed by the way in which the newcomer defended the bill.

“I could not sleep for a couple of nights before I introduced the bill,” he would say at a meeting of farmers who had become agri-entrepreneurs. “With the nine amendments, I am at peace with myself that farmers’ interests are protected totally.”

Now Singh hopes to focus on other equally important areas in his ministry. In addition to rural development, he handles panchayati raj, and drinking water and sanitation. He plans to push a countrywide scheme supporting water conservation, because it has the potential to reduce poverty and bridge the gap between the rich and the poor.

Regarding Mahatma Gandhi National Rural Employment Guarantee Scheme, Singh is as keen on the creation of assets, as he is on maintenance. More than anything else, he wants MPs to be involved in the implementation of Centrally sponsored schemes. Sir Chotu Ram freed peasants from the clutches of moneylenders; the grandson wants farmers to have easy access to cheap credit. He is exploring how best to use NABARD.

Singh’s staff say he is calm and charming, almost always. “He is always in control of things,” said a member of the staff. “He does not get ruffled easily. He listens patiently to everyone, and they go back feeling satisfied.”

Another staff member described Singh as “very down to earth, and a man who puts visitors at ease”. The staff’s observation must be correct, because it was way past 8pm, yet 22 Akbar Road was packed with villagers waiting to see Chaudhary saab.