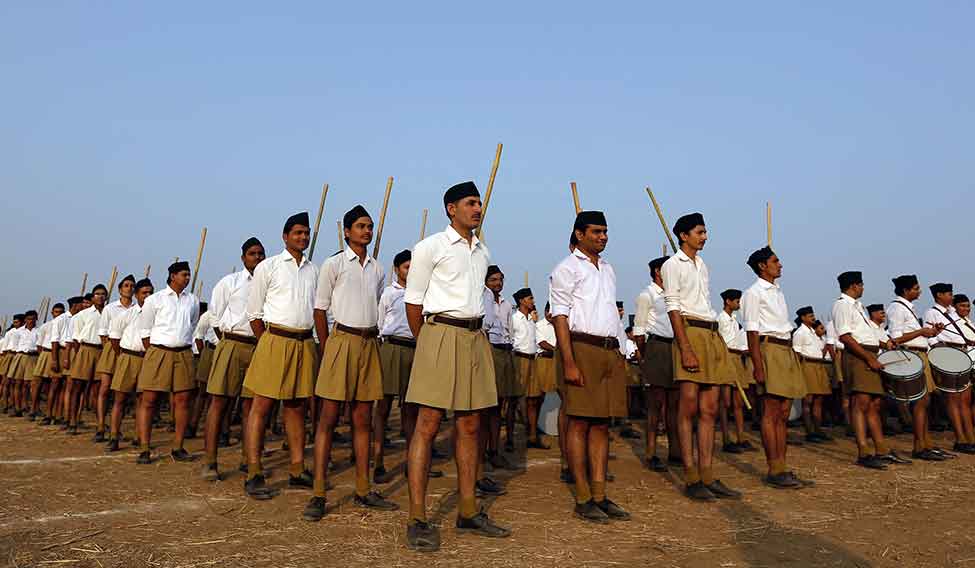 Time for change: RSS members during a drill | REUTERS

The RSS ditches shorts for trousers to woo the youth

Can men in khaki shorts pull the strings in a suited and booted government? Probably not. Which is perhaps why the flared baggy shorts, which have symbolised the Rashtriya Swayamsevak Sangh since its inception, are being dropped in favour of brown trousers. Apparently, the new look would not only help reduce mosquito bites during the 50,000 daily outdoor shakhas, but also give the members a contemporary look.

“We have decided to replace the khaki half-pants with brown pants. We are not rigid and take decisions according to the times,” said RSS general secretary Suresh Joshi, on March 13, at a three-day annual conclave of the Akhil Bharatiya Pratinidhi Sabha, the Sangh's highest decision-making body, in Nagaur in Rajasthan.

Many members apparently preferred grey, and even black, but Bhaiyyaji, as Joshi is called, was sure the brown pants would become as iconic as the shorts. If cricketers and martial artists could practise in pants, so can members at the shakhas, he said.

Apparently, senior leaders of the Sangh had pitched for pants to attract youth to the RSS. The shorts were perhaps too embarrassing or too symbolic of an ideology seen as divisive and anti-minorities by many. Therefore, it was felt that young professionals would perhaps turn up for shakhas—to build their bodies and their spirit of nationalism—if they were given the choice of wearing full pants.

Joshi, too, admitted that the idea of introducing brown pants was to attract youth, and RSS leaders said they would phase out the shorts within a few months. Also, a light-hearted complaint had come up during the early discussions to adopt pants, back in 2010: some pracharaks were miffed that the shorts exposed their chubby thighs.

Black or grey trousers, colourful T-shirts and white canvas shoes were also discussed, but were discarded for want of consensus, said Manmohan Vaidya, the all-India prachar pramukh of the RSS.

A few months ago, said sources, the RSS top brass invited fashion designer Suket Dhir, who won the International Woolmark Prize in January, for a detailed discussion on the trousers. Dhir's father has been associated with the RSS for many years, and he had attended a few shakhas as a boy.

At the meeting, Dhir suggested grey, because of its availability, but the RSS chose brown. For the design, he suggested the classic look to make it appealing to people of all ages.

The shorts, however, are not the only item of clothing to have been revamped over the years. Till the beginning of World War II, the RSS uniform was all khaki. In 1930, a black cap replaced the khaki one. A decade later, white shirts replaced khaki shirts. During the Emergency, black shoes replaced long military boots and, in 2011, canvas belts replaced leather belts.

Delhi-based designer Gautam Gupta, whose father and grandfather attended shakhas in Chandni Chowk for exercise, said the shorts might not be dropped altogether, at least for now. “They will retain the shorts for the exercise sessions because of the functionality,” he said. “The brown pants are an effort to create a more formal image, given the BJP is in power and the RSS is the force driving the party and, in a way, the government. Now they attend functions and parties, and they have to look presentable and, more importantly, formal. The shorts can never be formal.” 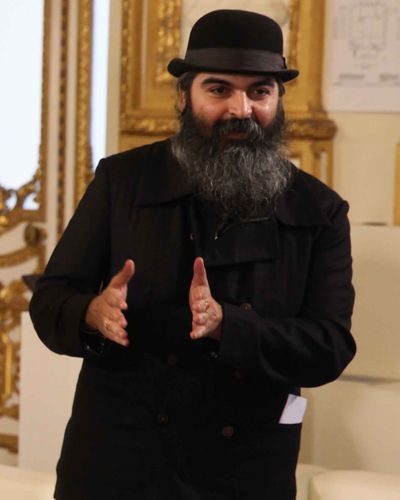 It is also an attempt to connect with the youth, said Gupta. Till March 16, the Facebook post that announced the change of uniform had more than 26,000 likes and was shared by more than 2,000 people. “Lots of youth, including me, support this move and will join the RSS soon,” commented Prakash Gowda, a techie. Nagpur resident Rajesh W. Raut said: “I think the chances of making inroads among the common people, in every section of the society, have definitely improved. Now we youth will not feel ashamed to join the shakhas of the RSS.”

The pants would also put an end to the term knickerwalas, which has been used to describe RSS members or people who support its ideology.

In the old days, BJP leaders such as L.K. Advani and Home Minister Rajnath Singh used to wear the shorts. Nowadays, while senior RSS leaders wear the shorts during functions, the ministers ditch them for trousers. The only minister seen in khaki shorts is Nitin Gadkari, who is from Nagpur, the home of the RSS.

The Sangh is believed to be in consultations with a designer to decide the fabric and style. With Modi pushing for indigenous materials, RSS cadres in Indian fabric would not only be a statement, but also make economic sense. It will also give a push to rural employment—women in small village units sew the shorts that are, according to a newspaper report, sold at Rs 3 per waist inch.

However, pants may come and shorts may go. The question is, will the RSS outlook change? At the Nagaur conclave, the RSS said it supported the demand for women's entry into temples across the country “without discrimination”. Men and women, it said, were equal partners in religious and spiritual matters and the issue should be settled “through dialogue and discussions” rather than protests and agitations. This change of heart, however, could be to appease the many young women who have recently enrolled with the RSS online.

The conclave, however, did not discuss contentious issues such as intolerance and secularism. One resolution raised concerns over the “anti-national activities on campuses”, another called for health care facilities for all.

The RSS also said it favoured reservation for those who really needed it, like the economically backward. RSS chief Mohan Bhagwat's speech seeking a review of caste reservations seemingly cost the BJP in the Bihar assembly elections. So the RSS is now expected to adopt a pro-reservation tone, albeit within a defined context, ahead of the Uttar Pradesh elections next year.