Nearly 1,250 RSS workers and leaders from all over the country attended the meet 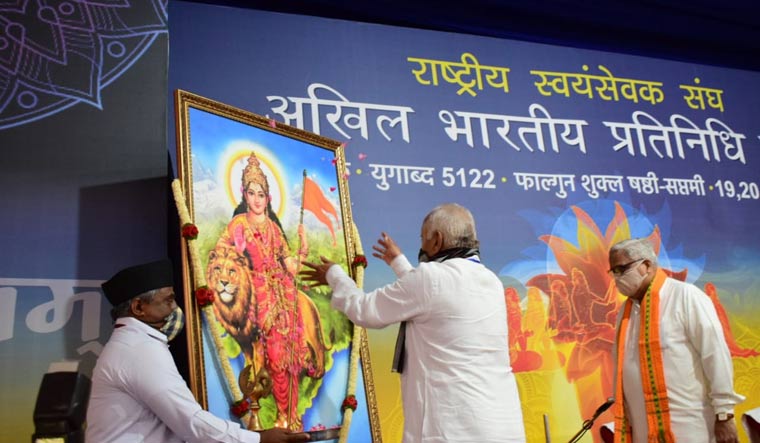 In continuing with its aim of bringing in a social change, developing villages and inculcating social security, Rashtriya Swayamsevak Sangh has called for the need to promote work opportunities to make the nation self-reliant.

Dattatreya Hosabale, general secretary of the RSS, said in Ahmedabad on Sunday that Akhil Bharatiya Pratinidhi Sabha (ABPS) has emphasized that society has to play a proactive role in harnessing work opportunities to mitigate the overall unemployment challenge.

Nearly 1,250 RSS workers and leaders from all over the country attended the meet that ended on Sunday.

One of the resolutions passed at the event said a thrust should be given to a model that is person-centric, labour intensive, eco-friendly and lays stress on decentralization and equitable distribution of benefits and augments village economy, microscale, small scale and agriculture-based industries. The areas like rural employability, unorganized sector employment, employment to women and their overall participation in the economy need to be boosted, it added. It also pointed out that efforts are essential to adapt to new technology and soft skills appropriate for our societal conditions.

The resolution said that the efforts to inculcate the spirit of ‘Swadeshi and self-reliance’ in the society would give the right impetus to local initiatives.

The ABPS felt that as a society there is a need to look for innovative ways to address the challenges of fast-changing global economic and technological scenarios. Opportunities of employment and entrepreneurship with emerging digital economy and export possibilities should be keenly explored, it added.

Interestingly, two days ago while addressing Panchayat members in Ahmedabad, Prime Minister Narendra Modi had focussed on how to improve lives in the villages and make maximum utilization of technology at the grassroots.

Modi drove home the pointing simple examples by which a turnaround can be done in villages.

Hosabale said that the RSS is working to serve society and are developing it into a social movement. He pointed out that efforts should be made to improve civic sense in the country. He said that the Prime Minister too had raised the issue in the recent past.

The RSS leader said that there are misconceptions, knowingly or unknowingly, about Bharat and that there is a need to bring a grand narrative based on truth.

He said that year after year, the RSS expands its base and they discuss plans for the next two years. The work, he said, is not being done to just increase the numbers but inculcate the feeling of Rashtriyata -- nationalism.