Getting the names is just the beginning of tax investigation

A few days before the first phase of the Lok Sabha elections in 2014, Narendra Modi addressed a gathering of chartered accountants in Delhi. With gusto and energy typical of him, the BJP's prime ministerial candidate said bringing back black money that had been stashed away in tax havens was his priority number one, and requested the audience to help him do that. It was, in fact, a recurring theme in Modi's campaign. A change of guard at the gate, he said, would ensure that the flight of wealth would not happen.

Modi is prime minister now, and black money is again in the news in India, with the Panama Papers throwing up hundreds of Indian names. These confidential documents, with details of about two lakh offshore companies listed by the Panamanian law firm Mossack Fonseca, have caused global tremors—the prime minister of Iceland has resigned, the British prime minister is under pressure and the names of some associates of the Russian president and some Fortune 500 companies are mentioned.

More than 500 Indian names have appeared in the mountain of leaked documents that the International Consortium of Investigative Journalists (ICIJ) examined. The biggest of them is actor Amitabh Bachchan. Other notable names are Aishwarya Rai Bachchan, real estate tycoon K.P. Singh of DLF, industrialist Gautam Adani's brother Vinod Adani and corporate lobbyist Nira Radia. Bachchan denied being a director of the shipping companies as mentioned in the papers, and suggested someone else could be using his name. Radia's office said it was her father's company, of which she was a share holder, and it was liquidated after his death.

A quickly appointed group with representatives from various government agencies—Central Board of Direct Taxes, Financial Intelligence Unit, Foreign Tax and Tax Research Division and the Reserve Bank of India—joined the special investigation team under retired judge M.B. Shah. Shah and his team had already been chasing black money. “The government will take all necessary actions as required to get maximum information from all sources including from foreign governments to help in the investigation process,” said Finance Minister Arun Jaitley. “The accounts will be monitored from the touchstone of legality, and action will be taken for violation of the existing laws.”

Not all offshore entities in tax havens are illegitimate. “It is important to note that there are legitimate reasons to have accounts outside,” said Reserve Bank Governor Raghuram Rajan, indicating that it is not going to be all about black money returning home.

The Enforcement Directorate has also been involved in cracking the names and details. Reportedly, revenue secretary Hasmukh Adhia had sought the ED's help in the probe. “Yes, we have instructions from the finance ministry to join the committee probing the Panama Papers,” said Karnal Singh, director general of the ED. “We will look into violations committed under provisions of both the Prevention of Money Laundering Act and the new Black Money Act.”

The SIT will first be checking how much of it is legitimate under the Liberalised Remittance Scheme, which allows people to take money outside. The RBI, too, will try to differentiate what is legitimate and what is not, under the Foreign Exchange Management Act.

THOUGH THE GOVERNMENT has not set a deadline for the investigation, it believes that the Panama Papers are just one more piece of information. Jaitley pointed out that the Liechtenstein accounts [revealed in 2008] had been probed, prosecutions launched and assessment orders passed. In 2011, a second lot of names surfaced as HSBC account holders. In that list, 569 account holders have been traced. Of them, 390 were illegal, and prosecutions have been started against 154. 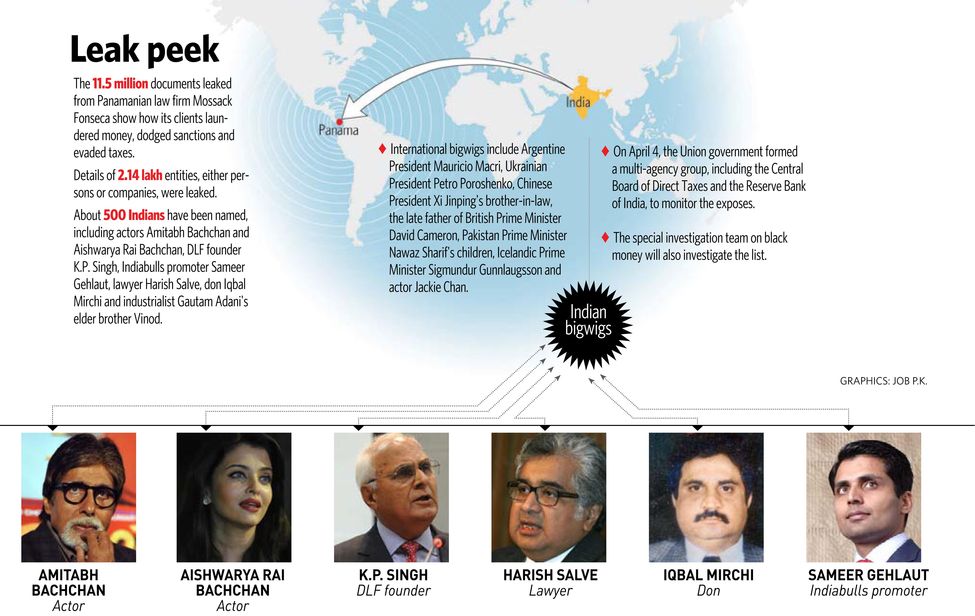 Jaitley said assessment orders had led to the discovery of illegal assets worth around Rs 6,500 crore. In an earlier expose, the ICIJ came out with a list of 700 people. Of them, 434 were traced and 184 admitted to having the accounts. The process of passing assessment and prosecuting them is under way.

The government, however, sat on a list given by German and French authorities in October 2014. When pressure mounted, it released the names of seven persons and a company in an affidavit. Among those were Pradip Burman of Dabur, bullion trader Pankaj Chimanlal Lodhya, and five members of the Timblo family of Goa. At that time, Dabur said Burman's account was opened when he was an NRI, and Lodhya denied having a foreign bank account.

In the 2015 budget, Jaitley announced a strong penal law against illegal assets abroad, with a three-month compliance window to come clean. This resulted in a total of 644 declarations of undisclosed foreign assets worth Rs 4,164 crore. According to the Undisclosed Foreign Income and Assets (Imposition of Tax) Act enacted in 2015, the penalty is three times the amount of tax payable, in addition to the flat rate tax of 30 per cent. And, there are provisions for up to 10 years imprisonment and confiscation of any undeclared foreign asset.

A source in the government says India has been getting information from the British Virgin Islands, to which it had sent a delegation. And, efforts are under way to negotiate a tax information exchange network with Panama. More than information, however, it is evidence that will stand judicial scrutiny. “To sustain an addition made by an income tax officer, the court wants evidence to show that the additional money is the person's income. Neither the CBI nor the I-T department is equipped to get that kind of evidence, because there is never a paper trail. But now there are some agreements; lists have come. But everyone knows these things happen,” said the source.

Anyway, it is not going to be a story of the multi-agency committee bringing home the money or getting hold of the tax evaders. “The committee will have to examine various laws of those countries, suggest whether our laws are good enough or what changes need to be made to deal with this,” said Sudha Sharma, former chief income tax commissioner. “Then a mechanism will have to be developed first to get year-wise information and then start investigations under all the relevant acts by the concerned authorities. This may include entering into agreements with those countries and plugging the existing loopholes which facilitate these transactions.”