That Maharashtra Minorities Minister Nawab Malik is furious is an understatement.

“He is in big trouble and I will not sit in peace until he is ousted from office. This is going to be a long show,” said Malik, referring to his very public spat with Narcotics Control Bureau’s Mumbai zone director Sameer Wankhede.

Within days of arresting actor Shah Rukh Khan’s son Aryan and several others during a drug raid on the Goa-bound Cordelia cruise ship, Wankhede went from being the lead investigating officer to the one being investigated. He is now at the centre of three ongoing probes—one, the investigation by the National Commission for Scheduled Castes into allegations of forgery over his caste certificate; two, the NCB’s vigilance probe to verify the Rs25 crore extortion demand to let off Aryan Khan; and three, the Mumbai police probe into four separate allegations of bribery against him.

Once the blue-eyed boy of the NCB—it had recognised him as one of its best officers just a few months ago—Wankhede finds himself in a pickle, his credibility and credentials questioned. And at the heart of this mess lies a barrage of tweets, bytes and close to a dozen news conferences by Malik, who has been levelling charges against Wankhede and targeting him personally and professionally on an almost daily basis.

The latest one accuses him of “kidnapping Aryan Khan for ransom in tandem with BJP leader and mastermind Mohit Kamboj”. On November 5, Wankhede was taken off the Cordelia case and five other high profile cases, which were transferred to the NCB’s special investigation team (SIT).

Barely an hour before he met THE WEEK at his office in Mumbai’s Kurla, Malik tweeted against Wankhede’s sister-in-law Harshada Redkar, demanding to know whether she, too, was “involved in the drug business”. He shared screenshots that showed one Harshada Dinanath Redkar listed under ‘respondent and advocate’ in a 2008 case registered under the Narcotic Drugs and Psychotropic Substances Act in a Pune court. 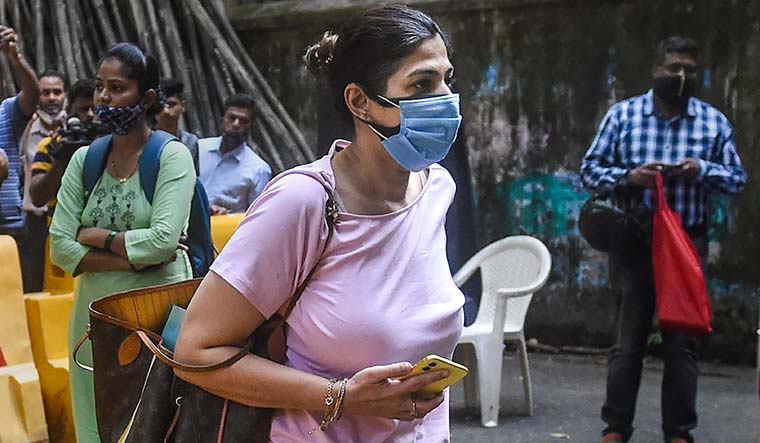 “I will not forget the way he (Wankhede) framed my son-in-law (Sameer Khan) and told him that he will oust me from my chair,” said Malik. He added that efforts were on to further expose “the man and his army of extortionists”.

The Malik-Wankhede feud started last year, when comedienne Bharti Singh and her husband Haarsh Limbachiyaa were raided and arrested for alleged consumption of cannabis. The raid was part of the then investigations into the Bollywood drugs case following actor Sushant Singh Rajput’s death.

At the time, Wankhede was leading the raid, and Malik questioned the NCB’s “protocol and procedures that jailed addicts instead of rehabilitating them”. He also said that Wankhede was “unfairly chasing celebrities”. Malik said that to avenge him, Wankhede framed his “son-in-law in a fake drug-related case under the NDPS Act and kept him behind bars for eight months”. That is when Wankhede allegedly said that he would make sure that Malik lost his chair and public office. 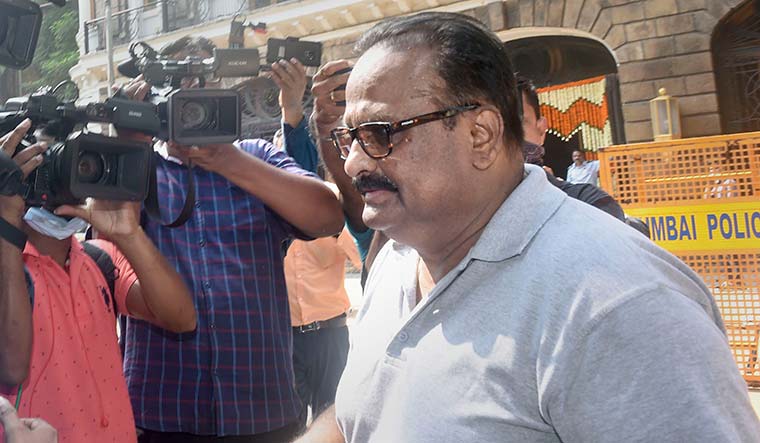 “He has done everything he could to push me out,” said Malik. “But I will push him out. There is no way he will be proven innocent. Let him disprove even one proof that I have submitted to the media, be it relating to extortion or forgery of documents to get into the Indian Revenue Service.”

Even as agencies probe Wankhede’s birth and marriage certificates to ascertain whether any forgery was involved, those close to him stand by him. “I can vouch for Sameer’s integrity,” said lawyer Dushyant Shingte, who practices in the Bombay High Court. He has known Wankhede since the 1990s when they were doing their bachelor’s in arts (history) at Ramnarain Ruia College, Matunga. They remained friends even after graduating in 2001.

“He was a Hindu from the SC category and was never ashamed of his caste,” Shingte said. “His mother was Muslim and he was very close to her, and it was on her insistence that he married a Muslim woman. But he has never hidden any of this. He does not have a big group of friends because he is not that outgoing, but he makes it a point to keep his friends close.” 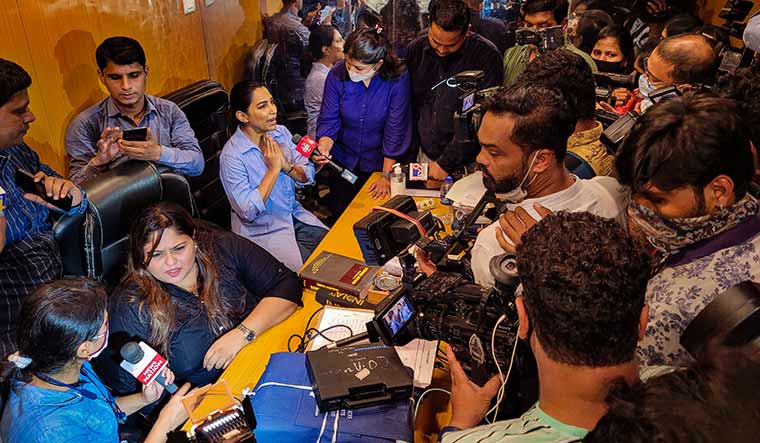 Shingte remembered Wankhede calling celebrities a “notorious lot” right from when his father was in the customs and a number of film stars would end up in the net for evading rules. “This entire notion that he is glamour-hungry is misplaced,” said Shingte. “He was never even money-minded because he had always been well-off. In college, when none of us could afford a mobile phone, he had one; he would come to college in his car, a Toyota Corsa.”

He recalled the time when they were waiting in queue to submit their final year admission forms, and saw a student bribing a peon with Rs100 to hasten the process. “Sameer was staunchly against it and we waited it out for three hours,” said Shingte. “But he did not shell out money even when he had a lot of it.”

Mohsina Mukadam, associate professor of history, Ruia college, recalled Wankhede being a shy and quiet student who was respectful, sincere and studious, and had full attendance. “Also, unlike many other alumni, Sameer always kept in touch with his alma mater and we even invited him to give motivational lectures to our students. A few years ago, we felicitated him with the ‘Rising Star of Ruia’ award. When he met me many years later, he reminded me of my classes on medieval India, which he always looked forward to.”

Wankhede’s former colleague at the Air Intelligence Unit said that he could “stick to his guns despite pressure from high-profile people”. “Why question his plum postings? He did a considerably good job, which was acknowledged, and that is how he got to where he is,” he said.

But Dr Zahid Qureshi, father of Wankhede’s first wife Dr Shabana, shared a different view. “I cannot believe he is defending himself as a Hindu now,” he told THE WEEK. “To us, Sameer and his family had always been practicing Muslims, which is why I got my daughter married to him in the first place. Both our families have been living in the same area, within a walking distance of barely two minutes. Even today, his father is known as Dawood in the area. In fact, that is how I got introduced to him the very first time we met. I am quite shocked seeing him refer to himself as ‘Dnyandev’.”

Wankhede married Shabana, a gynaecologist, in 2006. He has a son from his first marriage. The couple divorced in 2016. Qureshi said he did not question Wankhede on how he got into government service because he seemed to be “a very promising and determined young man who could pull it off on his merit”. “I still cannot believe Sameer used a forged caste certificate just so that he could get into the services via quota. I thought he was better than that,” said Qureshi.

Meanwhile, the Wankhedes have turned to law to “tackle Malik and his charges”. A defamation suit has been filed against Malik, and a permanent injunction sought, restraining him and others “acting under his instructions” from publishing, writing or speaking in the media about the family.

THE WEEK last met Wankhede about a week before Aryan Khan’s arrest on October 3. It was late afternoon and he had not had lunch. But that did not stop him from discussing the NCB’s attempts to crack down on the city’s narcotics network. A few days ahead of our meeting, Wankhede and his team were attacked by a gang of foreign drug peddlers operating near the railway lines in Mumbai—the third such attack in nine months.

“These people are fearless of the law. But we will not give up the chase,” Wankhede said. He seemed furious and agitated. “I will not hunt down people selectively,” he said. “I think that is the mistake we have been making so far—just going behind the biggies and ignoring the small fish. I will hunt even those with micrograms of contraband.”

Animated so far, he suddenly paused, as if lost in thought. He snapped out of it and changed the topic. He began narrating a “disturbing incident” from the day before. His actor-wife Kranti Redkar was driving with their twins when she was intercepted by a traffic cop for “speeding and crossing lanes”. “Can you imagine her speeding with two little kids in the car? How bizarre!” he said.

But what troubled him more was that the cop had “demanded a bribe” even when his wife offered to pay the fine. When I said I had a similar experience, he said, “Do not give in to it. Corruption is rampant and it is a systemic problem. This attitude needs to be nipped in the bud and we should speak against it. Complain if you encounter corruption.” Ironically, he is now being accused of the very same thing he spoke so vehemently against.

On November 4, the state SIT, which is probing allegations of extortion in the Aryan Khan case, found CCTV footage placing the blue Mercedes—belonging to Shah Rukh Khan’s manager Pooja Dadlani—at Lower Parel. It is here that the money was allegedly collected by self-styled detective Kiran Gosavi to prevent Aryan’s arrest. The extortion demand came out in an affidavit filed by Prabhakar Sail, who was Gosavi’s bodyguard.

Sail added that Gosavi, Dadlani and one Sam D’Souza met at Lower Parel hours after Aryan was picked up by the NCB. Later, Sail claimed to have overheard a conversation in which Gosavi and others discussed demanding 025 crore, of which 08 crore was to be paid to Wankhede. Whether the money reached Wankhede or whether he was involved in the negotiations is for the agencies to find out, but there is no denying that he has become a polarising figure.

During the interview with THE WEEK, Wankhede had acknowledged all the publicity and attention he had received as the leading man at the NCB. “I know I will be called names,” he said, “but I am really only doing my duty as a government servant. I want to be answerable to my salary. I will fight the wrong at all times.”

But, like Malik said, this is going to be a long show, and looks like it will only get murkier with allegations and counter-allegations.