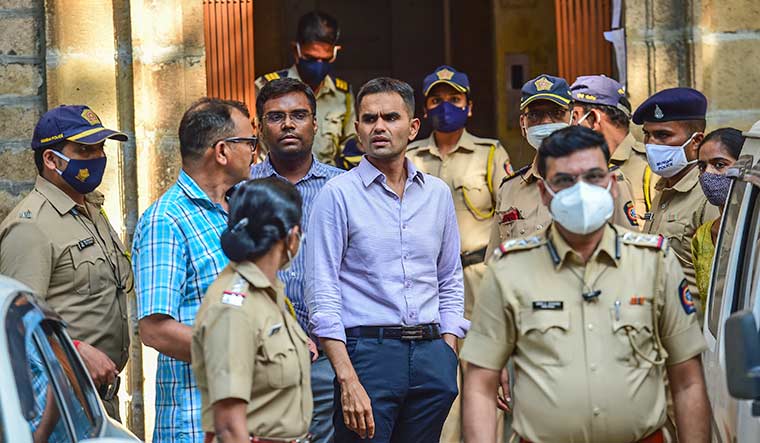 The sub-plot has taken centre-stage. From Aryan Khan, whom the Narcotics Control Bureau (NCB) arrested in a drug raid on a cruise ship on October 2, the focus has now shifted to the agency’s Mumbai zone Director Sameer Wankhede.

On October 26, Maharashtra Minorities Minister Nawab Malik forwarded a letter to NCB Director General S.N. Pradhan, alleging that the agency had been running an extortion racket and had framed a number of people in false cases in the past. Malik said he received the letter—which listed 26 cases of past wrongdoings by Wankhede—from an “unnamed” NCB official. “My fight is not against the NCB, but against this one man who has used a fake certificate to get this job and has illegally tapped phones of some people in Thane and Mumbai,” Malik said.

The NCB has now ordered a vigilance inquiry into the allegations against Wankhede, and the drugs case seems to have taken a back seat. On his part, the officer said it was personal vendetta as he had once arrested Malik’s son-in-law, Samir Khan, in a drugs case.

The latest attack on Wankhede came from Shekhar Kamble, a witness who alleged that the officer had taken his signature on ten blank pages during a raid in an old case. Kamble also said that, after the Prabhakar Sail allegations, he was afraid that Wankhede might frame him in a false case.

Sail, who claims to be the bodyguard of K.P. Gosavi—one of NCB’s independent witnesses whose pictures with Aryan went viral—had said in an affidavit that Wankhede made him sign 10 blank papers and that he overheard a conversation between Gosavi and a Sam D’Souza about “demanding” Rs25 crore and settling at 018 crore because “we have to give 08 crore to Sameer Wankhede”.

He also said that he had collected “two bags filled with cash” from an unknown person on Gosavi’s orders and handed them to D’Souza. This was allegedly after a conversation between Gosavi, D’Souza and Shah Rukh Khan’s manager, Pooja Dadlani. “Gosavi is missing now and I fear that NCB officials and others involved might kill or abduct me like Gosavi,” he said in the affidavit.

Malik had earlier tweeted what he claimed was Wankhede’s birth certificate to show that his father’s name was Dawood Wankhede and that he was a Muslim. Malik also released details of Wankhede’s first wedding, including what he said was a nikahnama (wedding document), and alleged that the officer had claimed Scheduled Caste benefits to get into the Indian Revenue Service.

Wankhede, in his reply, said his father is a Hindu and his mother is a Muslim. His father put out a video in which he says he was always a Hindu. Wankhede also said that he had split from his first wife in 2016. He is currently married to Marathi actor Kranti Redkar, who has been tweeting in support of her husband.

Claiming that there were threats to his life, Wankhede approached the Mumbai Police and also has filed an affidavit in the NDPS (Narcotics Drugs and Psychotropic Substances Act) court claiming that there was an attempt to botch the case.

Interestingly, this is not the first time Wankhede has set his sights on Bollywood. Earlier, as assistant commissioner of customs, he nabbed a number of Bollywood actors, including Ranbir Kapoor, for evading customs duty at the Mumbai international airport. In 2013, as deputy commissioner in the service tax department, he raided offices and homes of high-profile actors. At the time, director Mukesh Bhatt, then president of the Producers Guild of India, had accused the department of targeting the film industry. To this, Wankhede had replied, “We have no personal agenda against them, but we cannot stop our work.”

In 2020, within ten days of joining the NCB, Wankhede arrested actor Rhea Chakraborty and her brother, Showik, in a drugs case related to the death of actor Sushant Singh Rajput. He also led the questioning of actors Deepika Padukone, Sara Ali Khan and Shraddha Kapoor in the case.

“I think the NCB has gone overboard. It has deviated from its administrative mandate and has stretched the law beyond reasonable limits,” said former IPS officer and lawyer Y.P. Singh. He added that Aryan should not have been arrested as no drugs were found on him and there was no proof of consumption. “One apparent motive could be that going all out in the arrest of a star kid would invite a lot of media attention and would bring fame and glory for the officer,” he said.

Wankhede, speaking to THE WEEK, clarified: “This entire allegation that I am against the film industry or the elite class or a particular section of people is wrong. It is the media that highlights the drug cases pertaining to celebrities because of star value. For me, it makes no difference. [If] you possess, consume or peddle drugs, you are a criminal. I am only a government servant who is doing his job. If they call me Mumbai’s Singham, I am glad to hear that. But I will not stop until we finish off this entire (drug) menace.”

Born in Washim district in Maharashtra’s Vidarbha region, Wankhede and his sister Yasmeen grew up in suburban Wadala in Mumbai, where his father was a senior inspector in the state excise department till 2007. Wankhede started his career with a posting in the Intelligence Bureau in Andhra Pradesh in 2006, after which he was moved to Delhi. He cleared the civil services examination in 2008 and was assigned to the IRS.

This August, the Union government had given Wankhede the ‘Home Minister’s Medal for Excellence in Investigation’.

Now, though, the officer is facing the heat. On October 24, he wrote to Mumbai Police Commissioner Hemant Nagrale saying that threats of jail and dismissal had been issued against him by “highly respectable public functionaries”. He also asked Nagrale to ensure no “precipitate” legal action was carried out to frame him with ulterior motives.

“I feel targeted because this is a personal, below-the-belt attack,” Wankhede told THE WEEK. “Why is he (Malik) bringing up my family details, which have no bearing on the case? It is deplorable. They are not even leaving women. I am doing my duty with utmost dedication…. Does that warrant removal from the job? The allegations that I have forged papers to get into the IRS are absolutely false and I am willing to produce evidence whenever required. I am not scared of them.”