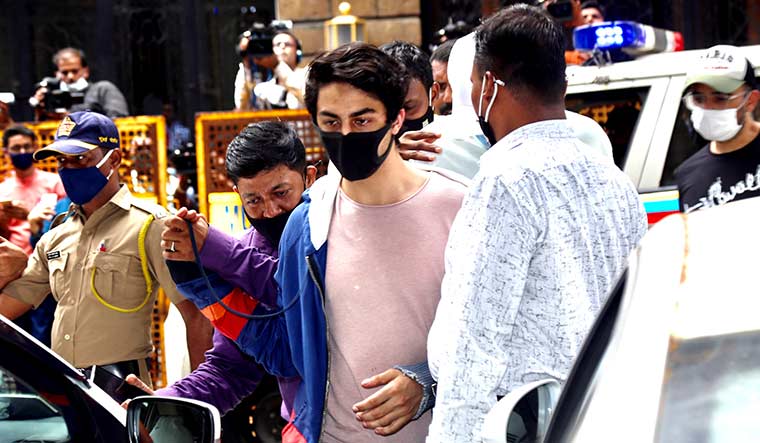 Through the wringer: Aryan Khan being taken to the NCB office in Mumbai on October 6 | PTI

THE HEADQUARTERS OF the Narcotics Control Bureau in Delhi is in a tizzy. The situation has been so ever since Sameer Wankhede, the NCB’s Mumbai zonal director, was accused of wrongdoing in the investigation into the Cordelia Cruise drug case involving actor Shah Rukh Khan’s son Aryan Khan.

A 2008-batch Indian Revenue Service officer, Wankhede was leading the investigation in the case. A fortnight ago, he had called the NCB headquarters and sought help in completing procedural requirements in the investigation. Some of his requests were part of the NCB’s standard operating procedure—issuing legal notices, for instance—while others seemed hurriedly prepared. That he wanted to ask a foreign country to share information related to the case made it appear that Wankhede was getting ahead of himself.

Apparently concerned, the NCB top brass asked Wankhede to explain how he established a foreign link in the case against Khan, who was facing accusations of financing drug trafficking. Not convinced by his explanation, the headquarters decided to stall the move.

On October 28, Khan was granted bail after spending more than three weeks in Arthur Road jail. Senior advocate Mukul Rohatgi, who made submissions on Khan’s behalf, said the conspiracy charge was added as an afterthought by the NCB. It was not part of the arrest memo, he said. Also, the Narcotics Drugs and Psychotropic Substances Act does not allow the NCB to imprison a person just because it feels that he can consume drugs if set free. WhatsApp chats have no evidentiary value, said Rohatgi, and the NCB had not recovered drugs from Khan’s person in the first place.

The NCB’s case against Khan is shaky now. But this is not the only reason why senior officers are unhappy. The case has been drawing a lot of unwanted publicity. Investigation methods adopted by Wankhede and the agency have come under scrutiny, and a barrage of allegations and counter-allegations—illegal phone tapping, false witnesses, incidences of extortion, nexus between drug dealers and politicians—are in the air. The NCB’s credibility has come into question.

It all began after Maharashtra Minority Development Minister Nawab Malik accused Wankhede of using forged documents to gain a government job and conspiring to implicate innocent people by planting drugs. Wankhede has denied the charges. The NCB, however, was forced to order a vigilance inquiry against him on October 25, after a witness in the drug case involving Khan filed an affidavit saying that an NCB official had demanded 025 crore to let Khan off the hook.

Malik recently accused former chief minister Devendra Fadnavis of having links to an alleged drug peddler. He also named NCB officers who allegedly harassed his son-in-law as part of the investigation in a drug case a few years ago. Questions are now being raised about the credibility of the agency’s inquiries in several other cases as well, including the one against actor Rhea Chakraborty last year. The NCB had probed Chakraborty’s alleged role in the death of actor Sushant Singh Rajput last year, after the Enforcement Directorate obtained her WhatsApp chats as part of its inquiry into a money laundering case. “It was not a case of drug peddling in the first place,” said an ED official. “The same Mumbai zonal unit [of the NCB] had investigated the case after the ED shared the evidence.” Chakraborty got bail after spending nearly a month in jail. 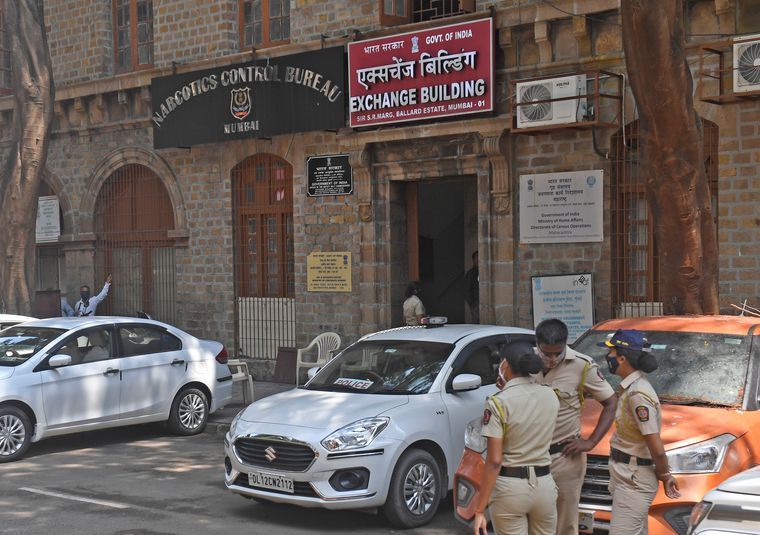 In the eye of a storm: The NCB zonal office in Mumbai | Amey Mansabdar

Wankhede’s supporters say he is being targeted for exposing the high and the mighty. All eyes are on the vigilance inquiry being carried out by Gyaneshwar Singh, the NCB’s chief vigilance officer and deputy director general of the northern region. A fair and transparent inquiry would be crucial in helping the agency weather the credibility crisis.

According to former NCB chief B.V. Kumar, the problem began when the agency decided to act on “sketchy” information and apprehended the accused before the alleged rave party on the cruise began. “The NCB team should have waited for the party to begin,” said Kumar. “If drugs and other narcotic substances were there for consumption, the agency could have gathered more evidence and recovered a larger amount of drugs.”

The first setback came even before the case was registered. Drugs were not found in Aryan Khan’s possession, and only a small recovery was made from his friend Arbaaz Merchant. The case against them fell through in court simply because there was no credible evidence to prove the serious charges under the NDPS Act.

Charges of conspiracy, too, could not be proved. The quantity of drugs recovered was below the stipulated threshold and the evidence based on WhatsApp chats was insufficient and uncorroborated. “So, the Bombay High Court had no choice but to grant them bail,” said Kumar.

He said the NCB had done “very good work” in the past, chasing small leads and converting them into major seizures after carrying out investigations systematically. “A single case like this won’t harm the agency’s reputation,” he said. “It is the political colour that the Aryan Khan case has taken that has brought some disrepute to the NCB’s Mumbai zonal unit.”

Congress veteran and former Maharashtra chief minister Prithviraj Chavan said the Union government was responsible for the mess. “It is not just the NCB, but the credibility of all Central investigating agencies has taken a hit,” said Chavan. “What happened to the ED case against former minister Chhagan Bhujbal? The NCP leader and family members were discharged by the sessions court recently. The problem is the misuse of Central agencies for political purposes.”

Chavan said the political situation in Maharashtra has been turning ugly since 2019, with many politicians defecting to the BJP after cases were registered against them by Central agencies. “If the agency is inefficient, and if it hounds innocents until they are proven guilty, then action should be taken against errant officers. Heads should roll,” he said.

The fact that no such action has been taken, he said, indicates that the investigators are acting at the behest of their political bosses. He pointed out that assembly elections are due next year in states such as Uttar Pradesh, Punjab and Uttarakhand. “The Aryan Khan case will remain a political hot potato till then,” said Chavan.

Union Minister Ramdas Athawale, however, defended the Centre. “The NCB is an independent body. It has no connections with the BJP,” he said. “Malik is deliberately making false allegations against the BJP. The NCB is doing its work correctly.” The case, however, is getting more politicised after Wankhede visited the National Commission for Scheduled Castes to submit caste documents.

The agency needs a shake up, especially in the way it is investigating cases. K. Srinivasan, former inspector general of the Border Security Force, said the NCB should focus on exposing drug kingpins and their trafficking network in Mumbai, Delhi, Chennai, Punjab and the northeast. “These drug lords do not keep drugs in their homes, but operate a chain of command,” he said. “Instructions are given by word of mouth; they leave no trail either on WhatsApp or in rave parties.”

In the Cordelia Cruise case, the NCB’s big hope will be on gathering foolproof digital and forensic evidence with the help of state-of-the-art labs run by agencies like the Directorate of Revenue Intelligence. “Using high-end investigation tools,” said Kumar, “the NCB can recover the evidence in very little time and then proceed with the investigation.”