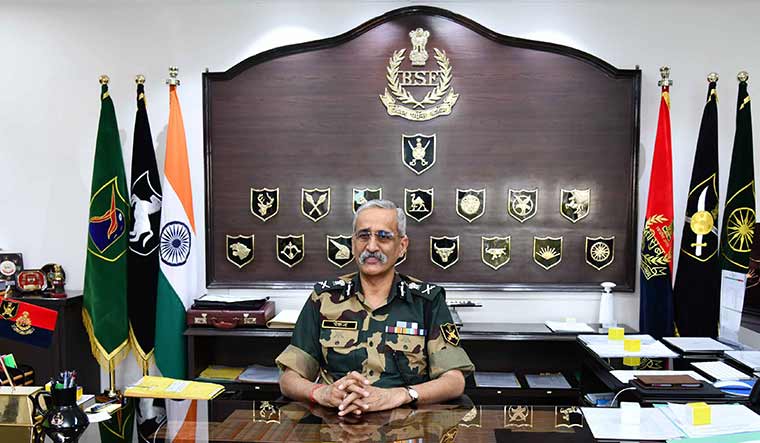 ON JUNE 26, two explosions rocked the high-security technical area of the Indian Air Force Station in Jammu. Low-flying drones had dropped improvised explosive devices, and then flown off undetected by the radar—the first such aerial attack on a defence establishment in India. The attack flummoxed the police and intelligence agencies, while the government faced a big question: which agency is responsible for thwarting new-age threats like drone attacks?

Air defence is normally the responsibility of the Indian Air Force. But when low-flying drones breach the international border and fly several kilometres into Indian territory, the Air Force cannot tackle them alone. Especially so if the target is not an air base or a defence establishment.

The police, on the other hand, are not adequately equipped to handle a national security threat of this nature. That is why the Union home ministry decided to extend the jurisdiction of the Border Security Force, the first line of defence on the international border with Pakistan and Bangladesh. The ministry has allowed the BSF to operate in areas up to 50km inside the international border in Punjab, West Bengal and Assam.

But the move has resulted in a political slugfest, with state governments and political parties that are opposed to the BJP saying that the new rule can be misused. Punjab Chief Minister Charanjit Singh Channi has convened a special assembly session on November 8 to discuss concerns, while West Bengal Chief Minister Mamata Banerjee has been flaying the Union ministry for allegedly trying to upset federal norms. Incidentally, former Punjab chief minister Amarinder Singh, who recently quit the Congress, has backed the ministry.

BSF director general Pankaj Kumar Singh said the aim of the new notification was to not only check infiltrators and illegal immigrants in states like Assam and West Bengal, where demographic changes are resulting in internal conflicts, but also neutralise aerial objects that pose a threat to border states. “If the state governments are well meaning, and if they have the interest of the state in mind, I do not see why they should oppose [the notification],” Singh told THE WEEK in an exclusive interview.

Singh’s father, ex-IPS officer Prakash Singh, pioneered police reforms in the country. The father had long tried to insulate security personnel from the kind of political crossfire that the son now finds himself in. “It is the prerogative of the government whether to authorise us or not,” said Pankaj Singh. “We will go as per the law of the land.”

A/ There are only two acts—the Passports Act, 1967, and the Passport (Entry Into India) Act, 1920—where changes (in the BSF’s jurisdiction) have been made. The changes are in two specific sections in the Passports Act, and one section in the Passport (Entry Into India) Act. It is only with respect to three sections in two different legislations that [BSF’s jurisdictional boundary] has increased from 15km to 50km. As these laws suggest, it is for tackling illegal immigrants and nothing beyond that.

[The changes were] in light of infiltrators and drones coming deep into Indian territory and dropping weapons and drugs. If the BSF has requisite intelligence, it would be able to counter these threats up to 50km. The BSF will be handing over culprits or seized property to the local police, which will then carry out the investigation and make the case. The police will decide whether a charge-sheet needs to be filed and a trial conducted. The BSF will not act as a parallel police force.

Q/ Were Punjab and West Bengal unable to handle these threats?

A/ In West Bengal, illegal immigration has long been going on because of a very porous border. The state police is handling it to a certain extent, but is unable to tackle it fully.

Q/ How big is the threat from illegal immigration?

A/ In Assam and West Bengal, the demography has undergone such a major change that it has been the cause of agitations in Assam for long…. In normal times, at least 10,000 people along the Bangladesh border cross it from different points every day. These are people with a visa. So the number of people travelling to and fro is very large, and infiltration and petty smuggling are issues.

Q/ What is the main threat in Punjab?

A/ There it is mainly drugs and weapons, which are coming in through drones at regular intervals. The drug problem in Punjab has reached worrying proportions.

Q/ Does the BSF have anti-drone technology to thwart such attacks?

A/ Anti-drone technology is basically of two types—hard kill and soft kill. Soft kill neutralises drones through frequency [jamming]; hard kill is shooting it down. We have some technology, but we are in the process of procuring more.

Q/ Is the BSF confident of handling the drone threats?

A/ There is no technology that is fool-proof. So there is a trade-off. If the drone is big and is carrying a huge payload, it will be easily visible. But if it is a small drone with a smaller payload, the detection system would miss it. So we have to look at our priorities.

Q/ If the Punjab government prevents the BSF from operating beyond 15km, can it not result in a clash with the police?

A/ It is the prerogative of the government to authorise us or not. We will go as per the law of the land. If the law authorises us, empowers us, we will go ahead. If the Central law bars us from increasing the domain of our operations, we will follow that. That decision lies with the policymakers.