Questions are now being raised about the legality of the Places of Worship Act, 1991

Supreme Court had, in its Ayodhya judgment, reaffirmed essential nature of the law 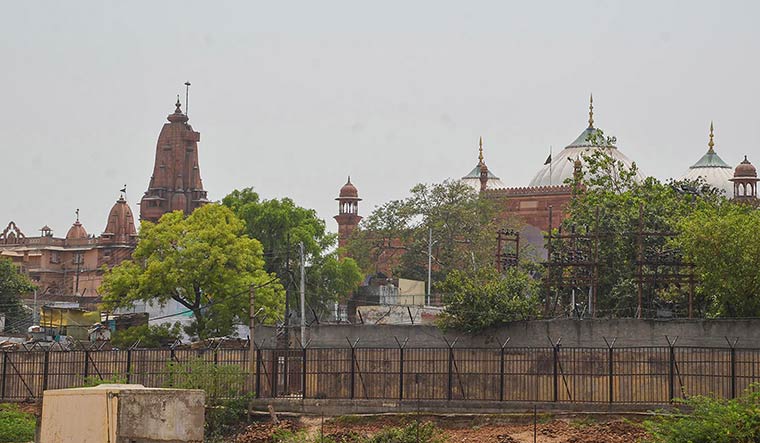 WHILE DELIVERING THE historic judgment in the Ram Janmabhoomi case in 2019, the Supreme Court had reaffirmed the significance of the Places of Worship (Special Provisions) Act, 1991. It had said that the act, meant to preserve the religious character of places of worship as they existed on August 15, 1947, was vital to protect the secular features of the Indian polity. It had also stressed that the Ayodhya matter was the only exception to the law.

However, after that judgment, claims for restoration of the Hindus’ rights with regard to the Gyanvapi mosque in Varanasi and the Shahi Idgah Masjid adjacent to the Krishna Janmabhoomi in Mathura have been taken up in court. A similar plea regarding the Qutub Minar has also reached the court. While these claims are being critiqued and countered through the lens of the 1991 act, the legality of the law itself is being questioned now.

The Gyanvapi case, where the matter has progressed to the point of a court-mandated process to ascertain the religious character of the place of worship, and where a shivling was allegedly discovered during the survey, provides the most immediate and toughest test for the 1991 act.

The Anjuman Intezamia Masjid management committee, which manages the Gyanvapi mosque, has challenged the survey in the Supreme Court; its contention is that the survey is barred under Section 3 of the 1991 act and also that the restrictions imposed amount to changing the character of the place of worship.

However, a Supreme Court bench headed by Justice D.Y. Chandrachud, who was also on the bench that delivered the Ayodhya judgment, has said that ascertaining the religious character of a place of worship is not barred under the 1991 act, and has also refused to interfere with the order of the civil court in Varanasi to appoint a court commissioner to conduct a survey of the mosque.

Then there is also the Krishna Janmabhoomi case, where a lower court has said that the challenge to an agreement reached between the Shri Krishna Janmasthan Seva Sansthan and the Shahi Idgah Trust in 1968 did not lie within the purview of the 1991 act. The agreement had resulted in a portion of the land being conceded to the masjid. The plea now is for removal of the Shahi Idgah Masjid from the complex.

As these two cases present the possibility of taking on the same political and legal proportions as the Ayodhya case, the focus is on the 1991 act. The P.V. Narasimha Rao government had brought in the law at a time when the Ram Janmabhoomi movement was at its peak. The purpose of the law, in the words of then Home Minister S.B. Chavan, was to prevent new controversies from arising with respect to conversion of any place of worship.

The Supreme Court had in its Ayodhya judgment reaffirmed the essential nature of the law, saying, “The Places of Worship Act is intrinsically related to the obligations of a secular state. It reflects the commitment of India to the equality of all religions.”

However, that has not stopped cases that raise questions about the character of places of worship from being filed in courts. The legality of the 1991 act has itself been challenged in the Supreme Court. In July 2020, Lucknow-based Vishwa Bhadra Pujari Purohit Mahasangh had filed a petition in the apex court claiming that the act barred the right of Hindus to reclaim religious property encroached upon by followers of another faith. In March 2021, advocate Ashwini Upadhyay approached the court saying that the law violated fundamental rights. Questioning the cutoff date of August 15, 1947, Upadhyay said, “The question is whether Hindus after independence cannot seek judicial remedy to undo through the legal process historical wrongs. Right to justice is violated by the 1991 act.”

On the other hand, alarmed at the recent developments, the All India Muslim Personal Law Board held an emergency meeting on May 17, in which it issued a strongly worded reaction to the survey at the Gyanvapi mosque and said, “The attempt to transform it into a temple is nothing more than a conspiracy to spread hate by communal forces”. It said the Centre needed to clarify its stand with regard to the 1991 act.

Said S.Q.R. Ilyas, executive member of the AIMPLB: “The board has formed a legal committee that will look into the 1991 act and what the Ayodhya judgment says about it. All the cases related to mosques will be studied in detail and appropriate legal action will be determined.”

Former chief justice of the Allahabad High Court Govind Mathur said that the act is an important piece of legislation brought to strengthen the secular fabric of the nation and to ensure faith among the minorities to whom assurances were given in 1947 for a peaceful existence in democratic India. “The assurance so given was put under serious threat by communal hatred that spread during the Ram Janmabhoomi movement. With newer claims being made about places of worship, it is time to invoke the authority under the act of 1991 to stop all efforts to interfere with the nature of religious places.

“It is for the courts to check and control the moves aimed at creating a communal atmosphere. They have to ensure adequate application of the 1991 act in its true spirit. Constitutional values and goals have to be upheld in the face of majoritarian mischief.”