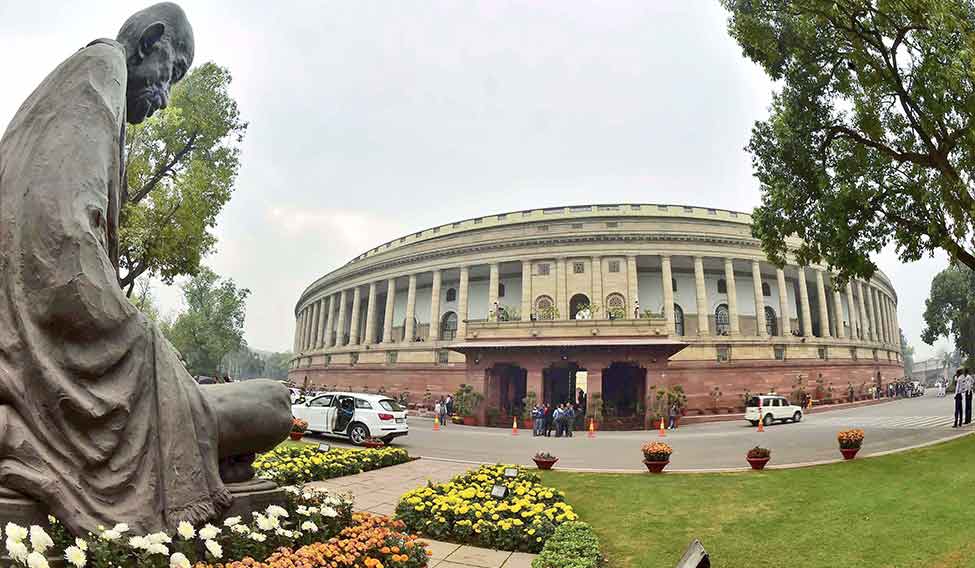 House in disorder: The winter session of Parliament was marked by endless disruptions | PTI

Many members of Parliament are waiting for a particular red-flagged file to move from the finance ministry in the North Block to the prime minister's office in the South Block across the road. It pertains to the doubling of their salary and allowances. From the current monthly salary of Rs50,000, and constituency allowance and secretariat and office assistance allowance of Rs45,000 each, it would become a total of 02.8 lakh a month. Should Finance Minister Arun Jaitley approve the proposal, it would then go to Parliament in the form of Salary, Allowances and Pension of Members of Parliament (Amendment) Bill, 2016.

There is heartburn over the proposal for many reasons. Do the MPs really deserve the hike? The just-concluded winter session of Parliament has left them in a poor light over the disruptions, giving the impression that they don't do their work. There is also the austerity issue which was raised by the Narendra Modi government after it assumed office. But, above all, the idea that the MPs decide their own salary, unlike, say, the bureaucrats or the military officers, has come up for question.

A BJP leader called it “a vexing issue that the government has not been able to solve”. Parliamentary Affairs Minister Venkaiah Naidu had “tried seriously to put in place an independent body to recommend salaries, allowances and perks for MPs,” he said. 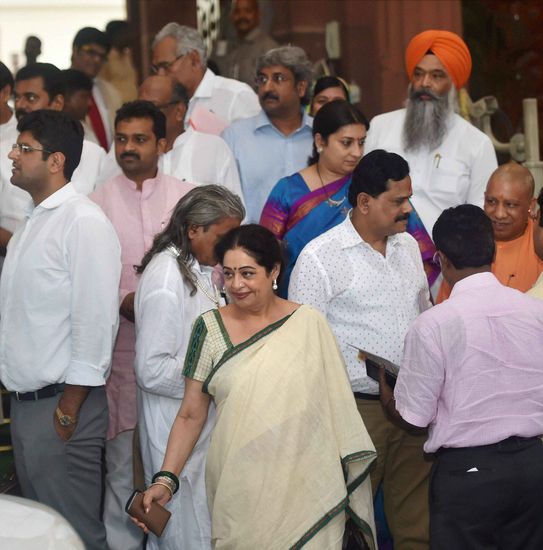 Their own boss: BJP MP Kirron Kher with other MPs outside Parliament. There is a debate over whether MPs should decide their own salary | PTI

The emoluments of MPs, under the Constitution, are fixed periodically by amending the Salary, Allowances and Pension of Members of Parliament Act, 1954. The last amendment was made in 2010. Even at that time, the issue of MPs hiking their own salaries—more than three times—was described as a matter of conflict of interest. The Left parties had opposed the hike citing inflation. BJP leader L.K. Advani had led a group of MPs who favoured the setting up of an independent commission, and said an all-party meeting convened in 2005 by then speaker Somnath Chatterjee had also favoured an independent pay commission exclusively for Mps.

In his reply, then parliamentary affairs minister Pawan Kumar Bansal had said that a mechanism for revision of members' salary and pension was needed because there was a “growing cynicism about politicians among the people. But wider discussions are required for that and it would be sent to a parliamentary committee.”

In Bansal's shoes now, Naidu wanted to achieve what the UPA government could not do, by building consensus among the parties. Three months ago, he made 'Independent Emoluments Commission' the main agenda at the All India Conference of Whips. The ministry of parliamentary affairs proposed a three-member Independent Emoluments Commission to recommend salaries and other allowances. “The move will not only put to rest the public outcry and media criticism over MPs themselves deciding their salaries, it will also provide an appropriate opportunity to consider the huge responsibilities and important role they play in our representative democracy,” said Naidu.

While the idea found many supporters, it was scuttled by MPs at a meeting of the Joint Parliamentary Committee on Salaries and Allowances of MPs, headed by Yogi Adityanath of the BJP. In June, he had proposed the doubling of salaries and allowances. A few days after the conference of whips, the JPC said that while it had no objection to an independent mechanism, “that should not dilute the mandate of the parliamentary committee constituted for the purpose.... Any expert group's recommendations cannot be superimposed on the panel of Mps.”

It is not as if Naidu would have let any commission fix a low salary for MPs. His proposal had suggested that the salary should not be so low as to deter suitable candidates, or so high as to make pay the primary attraction for the job. “Salary should reflect the level of responsibility; those with outside interests should not be deterred from entering Parliament, and those who choose to make Parliament a full-time career should be adequately rewarded to reflect their responsibilities,” he said. 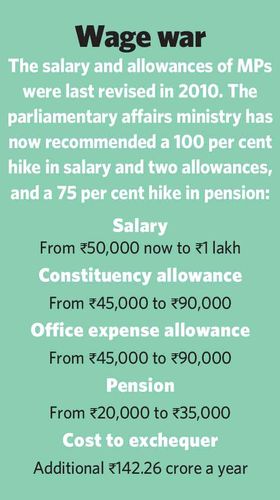 Sources say that with the government committed to the revision of salaries every five years, the file on it will move to the PMO and get cleared by the cabinet, to be tabled as an amendment bill when Parliament meets next. In all probability, it would be passed unanimously with the rhetorical dream of transparency by way of an independent commission coming up in the course of the discussion.

A few MPs, however, have been votaries of the idea of “performance-linked salaries”. Bansal had, in the course of his reply five years ago, said they should not take the daily allowance on days when Parliament does not function—meaning gets disrupted. Congress MP Sanjay Nirupam was vocal in suggesting this when the BJP, as an opposition party, stalled Parliament back then. “I know for sure that a few MPs who have not attended Parliament have personally written, volunteering to forgo the allowance,” he said. “But the question is who is paying the price for whose failure to attend and discharge work as MP? If the BJP decides to stall the Lok Sabha, why should an MP from a small party like the BJD lose the remuneration?”

The subject of performance-linked salaries for MPs has been debated on public platforms, though not in Parliament. However, there is a strong case for revision of salaries of MPs, though how much is debatable, said Nirupam. “Our MPs are the lowest paid in the world,” he said. “Most MLAs are getting more than a lakh a month. MPs represent about 6 to 8 legislative constituencies. So, to make it on par, a proportionate increase is needed. MPs are under pressure from their constituencies as well as Parliament. We get Rs30,000 for two personal assistants, one in the constituency and one in Delhi. Would I get a good PA or a competent researcher and other assistance for Rs15,000?”

At times, some MPs have spoken about deserving more than what the highest paid bureaucrat gets, never mind that the MPs' salary is tax-free.

Former BJP MP from Chandigarh, Satyapal Jain, doesn't want to talk figures. “Nowadays, MPs have to perform a 24-hour job,” he said. “To ensure that they stay honest, are not looking for commissions, and do their work diligently, they have to be paid well and given the allowances and facilities, keeping in mind the reality of the world, inflation and society's expectations from them.”

Ironically, the perception of parliamentary disruption this winter session has been belied by prsindia.org, the watchdog that monitors Parliament. The Lok Sabha functioned for 98 per cent of its scheduled time, and the Rajya Sabha 51 per cent, almost like it has in the past four years. Much of the time, however, went into non-legislative business like discussing inflation, disaster, drought and floods. Also, two days of the session, which were totally unobstructed, went into expressing our commitment to the Constitution, which, in fact, gives MPs the right to decide their salaries.