Artists in Ladakh are dreaming and carving alchemies in ice 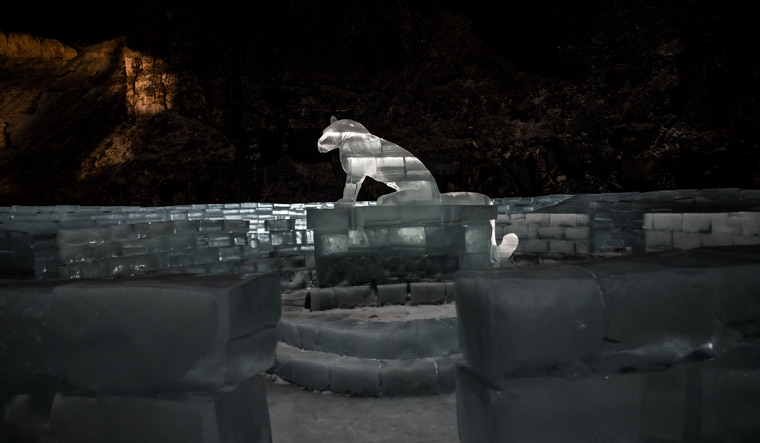 The list of tools might include a sturdy rubber apron, safety goggles, and industrial-grade earplugs. After all, the making of ice sculptures requires power tools like electric chainsaws and grinders for lopping off ice blocks from frozen rivers and lakes. This is the kind of ice carving you might imagine taking place in the higher reaches of Ladakh in the winter months, when temperatures hover between -25º and -30º Celsius, and the ancient Zanskar river freezes to a road.

For a group of contemporary artists in Ladakh, representing the Kangsing Snow and Ice Sculpture Association, fastidiousness about proper equipment is hardly the right attitude to adopt. The idea is to make some headway in creating a winter wonderland in Ladakh, beyond spotting snow leopards or plying the Chadar trek on the Zanskar trail. And, there will be several hits and misses to that end. For this year’s Ladakh Snow and Ice Sculpture Workshop in Chilling valley, along the banks of the Zanskar river, sculptors, painters and ceramicists in their 20s and 30s wielded used gloves and goggles acquired from second-hand markets—hand-me-downs that the Army used in the Siachen Glacier. High up amidst the snow-capped mountains, they had basic, fuel-driven chainsaws used for agricultural purposes, along with tile-cutting blades. They improvised their ice-cutting chisels. Help poured in from the National Disaster Response Force (NDRF) that supplied shoe crampons apart from ropes and harnesses to safely walk the ice bed, in case it cracks. There were guides and workers from the Zanskar valley available to work as extra hands. And, together, they chopped, lugged, and transported 100 pieces of 28-inch by 15-inch ice blocks every day through January to finally create an ice cafe, some 40ft by 30ft, by February 10, now open to tourists who will also see it melting away. There were plans to create a fruit bar and a functional restaurant inside the cafe. But preparing the base of the cafe itself took so long that sunlight exposure on the chosen site increased from two to six hours as February inched forward. And once the sunlight lengthened, the translucently clear café began to appear whitish from the top. 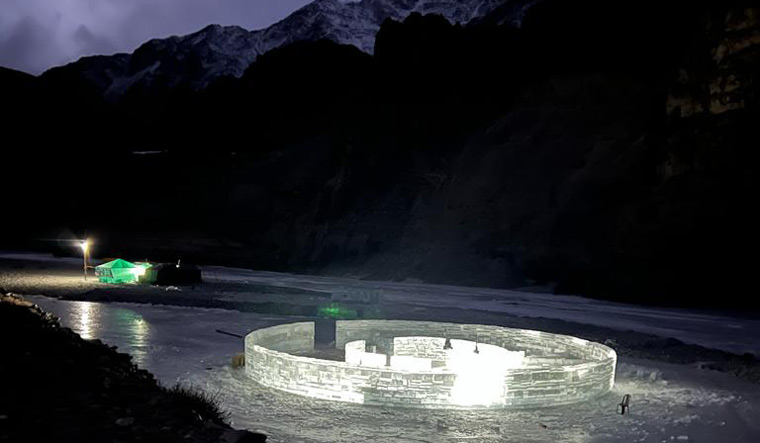 “We have a big dream to not only work with ice and snow from a particular region but also participate in world championships in ice carving. Eventually, we want to hold them in Ladakh. We couldn’t participate in the Winter Olympics in Beijing this year. But we want to be there in Italy for the next Winter Olympics,” says Chemet Dorjay who is one of the founding members of Kangsing, which means “snow lion”, a mythical animal in the Himalayas.

Dorjay and Tsering Gurmet Kungyam—who were once students at the fine arts department of Banaras Hindu University—are trained sculptors. They would often wonder how they had worked with every material possible, from bronze and marble to granite and clay. “We grew up playing with ice and snow. We saw the incredible work being done with ice in China and Europe. And we’ve hardly done anything here in India,” says Gurmet, who also trained under Ravinder Jamwal, a veteran sculptor from Jammu known for statues of Dogra legends. After they had both graduated and returned to Ladakh, they began to seriously consider working towards creating ice art along with Stanzin Khangsar, a traditional artist from the region. 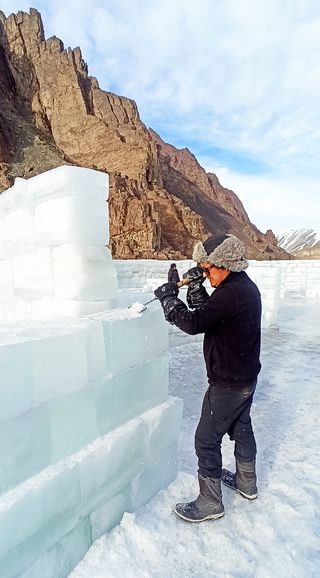 Getting on with their regular drill as sculptors, painters or ceramicists is well-nigh impossible for the four months in winter when materials and medium harden with frost and there is hardly any running water from taps. The endless possibilities with ice became clearer after they saw the famed artificial glaciers built by engineer and educationist Sonam Wangchuk. In 2018, they convinced Wangchuk to let them create an ice sculpture inside one of the glaciers. The three-metre-high Changchup Chorten was thus born in Phayang village, some 15kms from Leh; it celebrated Wangchuk’s efforts in conserving water. From here on, frozen stupas and other small-scale figures like dragons would often come up in the Leh market to help gauge what one would call in academia reader-response. It was Wangchuk who later helped the artists get to Sweden to understand the making of the Ice Hotel in Jukkasjärvi. Soon, in 2019, the original members of the Kangsing collective, including Dorjay and Gurmet, got accepted in the Harbin International Snow and Ice Festival in China—believed to be the world’s largest of its kind with its massive, mind-bending alchemies in snow and ice. Siberian Russia lies just a few hours north of Harbin. “We have all the government support here, but reaching the skill and calibre of China in ice carving will take at least 10 years,” says Gurmet.

Seeing the best at play gave the artists a sense of the staggering investment required to build clear-eyed ice art.

“A snow-making machine typically costs a hefty Rs26 lakh and a decent ice cutter is at least Rs80,000 apiece. No one knows how to make them in India,” says Dr Nordan Otzer, an ENT surgeon and social activist who also organises the Kangsing workshop.

The budget was scaled down to Rs20 lakh (sponsored by Ladakh Police). “We had no other choice but to move ahead. With a wood cutting saw machine, we harvested ice from the Zanskar river bed and started building the cafe. It’s more like a colosseum. We also built a snow leopard on the way to Hemis National Park,” says Otzer. But if one were to overlook the logistical challenges, it is the act of chipping and moulding ice into intricate beings that have been the most rewarding.

“Ice is one of the most interesting mediums. It is as fragile as glass and as heavy as a rock,” says Dorjay, who is also a member of international ice carving associations. Interestingly, while making ice sculptures, water is the only agent to fix two blocks together. “The upper layer of the ice, which is shiny and in contact with the sun, is quite slippery. Once you put a block over another, you have to throw water over it so the blocks stick. This technique is used around the world,” says Dorjay. But, most importantly, it is the only medium that does not last. “It is the idea of impermanence that is the essence of ice. And our lives, too. That everything beautiful or terrifying that you see and experience will melt away,” he says.