From Will Smith to Madonna, Sacha Jafri’s collectors include a veritable hall of fame 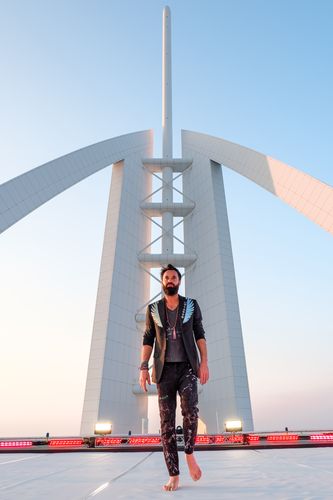 The world is the canvas: Sacha Jafri.

The first space art object on the moon has never really been verified. Yet, there have always been murmurs of the Moon Museum. It was apparently smuggled into the Apollo 12 lunar lander by a mysterious NASA engineer, “John F”, four months after Neil Armstrong landed on the moon in July 1969. The Moon Museum was a chip-sized “ceramic wafer” (or a tile) which had engravings by six leading lights of the Soho art scene from 1960s New York. One of them was Andy Warhol. His “stylish signature” on the chip bears a close resemblance to a penis. So, the famous American artist may have sent the first “dick pic” to the moon.

NASA does not recognise the Moon Museum. But 50 years after its last mission to the moon, it has officially commissioned British contemporary artist Sacha Jafri to create an everlasting canvas of sorts. ‘We Rise Together—with the Light of the Moon’ has a heart motif engraved onto a specially designed plate depicting a man and woman embracing each other.

“To withstand the conditions of the moon is a big deal. You have got to deal with radiation, gravitational pull, erosion through moon debris, meteorites, and the big issue that the moon is 123 degrees Celsius during the day, and it gets to -200 degrees Celsius at night,” says Jafri from Dubai in a Zoom conversation with THE WEEK. “Few things can withstand these conditions. The only way NASA can validate it as an official artwork being placed on the lunar surface is if it can last a thousand years, and if they could prove that, then it becomes eternity with regards to science. So, the canvas is made of a very special space alloy, similar to (alloys used to make) the nose cone of a rocket.”

Why do we make art? What is an artist’s role in society? How can art change the world? How does it even fulfil the needs of a society? These are questions that Jafri, 46, has been deftly negotiating as an artist-philanthropist. It is not without reason that he has been chosen as the artist to place ‘The First Official Artwork on the Moon’. “Connecting with humanity” is a phrase Jafri often bookends his sentences with; it is the headline message for all his big-banner commissions. And pretty much all of them have an association with global blockbuster names.

The collectors of his work include a veritable hall of fame—from Hollywood A-listers like Leonardo DiCaprio, George Clooney, Will Smith and Eva Longoria to sporting icons like David Beckham, Virat Kohli and Rafael Nadal; from the British royal family to the Maharaja of Jaipur; from Sir Paul McCartney to Bill Gates, Madonna and Oprah Winfrey. Press statements say that Jafri has raised more than $140 million for charities across the world from the sale of his art.

Jafri was not much heard of in auction circuits before he sold “the largest art canvas in the world” last year—a 17,000-square-foot work called ‘Journey of Humanity’—which was created over seven months during the lockdown in the ballroom of Dubai’s Atlantis, The Palm. It was bought as a whole by a French cryptocurrency businessman for twice the base price at an auction.

The sale of the ‘Journey of Humanity’ at $62 million came right on the heels of graphic design artist Beeple’s NFT (non-fungible token) going for $69.3 million. And suddenly, Jafri’s journey became aligned with that of the highest selling artists in the world, with “the fourth highest auction price ever paid for a work of art by a living artist”. 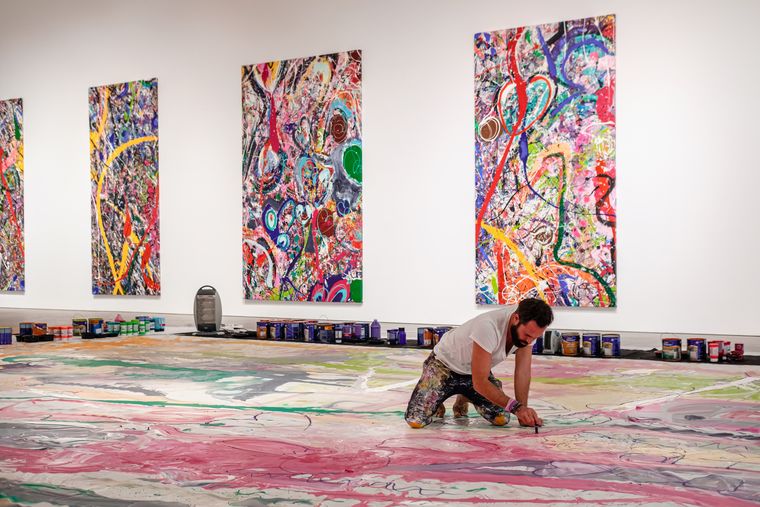 Art of giving: Jafri during the creation of the Journey of Humanity, the largest canvas painted at Atlantis, The Palm in Dubai.

Jafri is also planning to create a charitable NFT series for his moon artwork. They will be on four issues—education, health, sustainability and equality—and will be released simultaneously to honour crucial stages of the NASA mission, beginning with the rocket reaching the stratosphere. But surprisingly, Jafri does not think NFTs in the art world are here to stay. “Our future is not technology. Our future is human. NFTs are absolutely rubbish,” says Jafri. “I can say this very comfortably that within three years, 98 per cent of all NFTs will be worth zero, they won’t be worth $1,000, they won’t be worth $500, they’ll be worth zero. Because it is a Ponzi scheme, it should not even be legal.”

But he knows how to give the devil his due. Last year, Jafri sold an NFT artwork titled ‘On the Wings of an Angel’ for $1 million in less than a minute at the amfAR’s annual Cannes Gala. “So, 2 per cent of the NFTs are meaningful projects with value,” says Jafri. “There is an opportunity here to change the model of the charity world. You can raise a huge amount of money through NFTs for real charitable projects.” 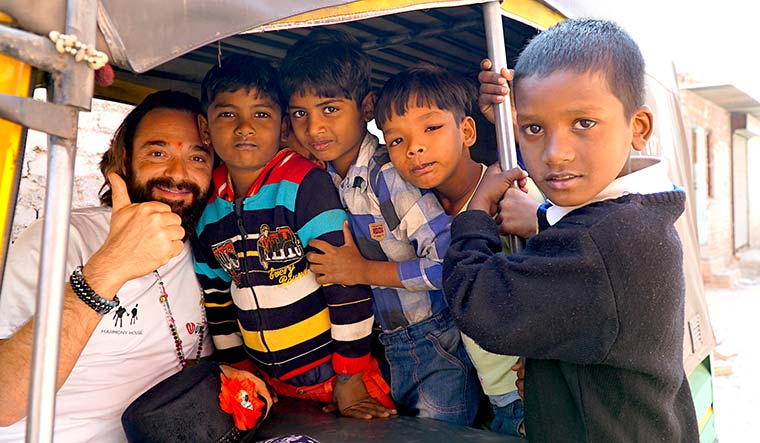 At a charity event in India.

He has now collaborated with UNESCO for a special exhibition called ‘The Art Maze’ featuring 30 of his original oil and acrylic works on heritage sites, as part of the 50th anniversary of UNESCO’S World Heritage Convention. After the Dubai launch, it will travel to all the continents through 2023. And if it were possible, Jafri hopes to plonk his artwork in front of the Taj Mahal in India as part of this roadshow.

“I feel very British because I am a British-educated boy. I went to Eton and Oxford. One of my best friends from school is Prince William. But my heart is very much in India. Whenever I go to Delhi or Mumbai or Rajasthan or Jaipur, something happens to my heart. Something happens to my soul,” says Jafri, who identifies as quarter English, quarter French, and half Indian. Jafri’s father’s family is Indian. His grandfather, Fareed S. Jafri, was a journalist and diplomat whose final posting was in the UK where his father was born and went on to marry an English woman who was part-French.

But what explains this drive to serve humanity with his art? “I think it all began when I went on this five-year journey to visit 42 refugee camps around the world in 2004. I spent a lot of time with the kids. I created paintings with them. And then we sold a collection of 12 paintings at an auction and raised $12 million, which was a lot of money at that time. This money went to the kids. And when I revisited them three years later, I saw the difference. And that changed my life.”

Back in 2009, he said he wanted to be remembered like Van Gogh and create art which will last through the ages. “I am nowhere near what Vincent Van Gogh is in this world,” says Jafri. “Sadly, in the name of post-modernism, we have thrust a lot of nonsense upon ourselves. Big names like Jeff Koons, Damien Hirst and Anish Kapoor might be remembered for another 50 years. If they are lucky, then 100 years. Van Gogh will be for a thousand years.” For now, he is definitely hoping to stick around on the moon for a thousand years.