India Art Fair is not all about expensive art this time: IAF director Jaya Asokan

In IAF 2022, there is a focus on younger artists 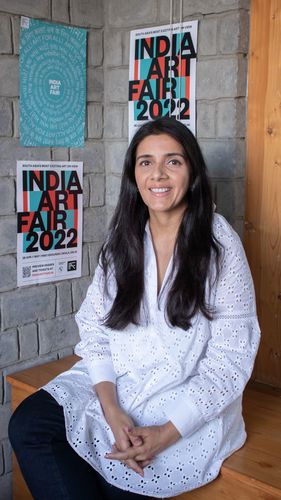 The 13th edition of India Art Fair (April 28 to May 1), one of the largest art fairs in South Asia, is special this year as it returns to terra firma after two years of the pandemic. But there are several reasons to cheer as the IAF now turns the spotlight on younger artists hit by the pandemic, seeks new collectors, digs deeper into smaller cities to find art and ropes in art foundations working at the grassroots. Helmed by Jaya Asokan for the first time since her appointment in April 2021, the IAF this year seeks to give audiences an opportunity to engage with the cultural landscape of India and the region at large. Edited excerpts from an interview with Asokan.


The India Art Fair is set to return to the physical format after a gap of two years. How excited or nervous are you?

I think the whole team has worked really hard to make this a celebration of Indian and South Asian art. And this time, in particular, we actually started doing active programming for five months before the fair, which we never do. We have had studio visits, online symposiums for younger artists, and many other things to build momentum for the fair this year.


The art world has had to adapt quickly when it comes to online access. How has the IAF evolved over the last two years in terms of business and organisational changes, and hard decisions you might have had to take?

It was not so much about hard decisions as much as to pause, reset, and re-evaluate how we wanted to, or I personally wanted to, shape the fair going forward and what we needed to do to be current. So, I think the digital strategy where it applies to auction houses and galleries applied to us as well. Because I realised that it was a great time to start going online with our programming. We have the benefit of having a large and diverse demographic of an audience and we found ways of programming which engage with different sections of our audience. And I think the pivot for us was not to say that we went completely online, but to holistically look at the fair as being a 365-day affair instead of just a four-day event. And this edition is the culmination.

The IAF is such an experience-driven event and we have started using this phrase, “post pandemic”. How do you expect the audience engagement or expectation to change, now that they have come back to the fair?

There is a big focus on the younger generation of artists in this edition of the fair. They have been hit quite hard by the pandemic, as you would imagine, because they were at a nascent stage in their career. So, it was very tough for them compared with the established artists who did very well and sold in the last two years. We can assure the people coming to the fair that it is not all about, say, expensive art. We have different price points and different benchmarks. We also have a series of workshops just for the visiting public if they want to engage with the arts in any way. We have the auditorium talks which address a lot of what has been born of the pandemic, whether it is NFTs or anything else in the last two years.

How are you planning to make space for the advent of NFT and digital art pieces? They are making a lot of money internationally, but several art-watchers and artists themselves are not very impressed.


I think that NFTs have just expanded the discussion and the market for digital art and artists, which is continuing to grow. We are not going to sit here as a jury or judge its viability. Whether it is a bubble or not is not something that we necessarily want to speculate on. It is part of the conversation today. So, what we are doing is just giving them a platform to be part of the conversation, because they are now. But I agree that the prices have been quite something, including for Indian artists.

Is this edition a sort of leaner and meaner version of previous IAFs? Are there fewer exhibitors or collectors taking part compared with previous editions?

From an exhibitor standpoint? No. In terms of international galleries, of course, there are fewer, because India just opened its borders and relaxed travel restrictions on March 30. And we plan six months in advance. So I would say that from the international collector and exhibitor perspective, there has definitely been an impact. But we look at it as a positive. It has really forced us to look inward. So, even from a collector's perspective, we have been travelling to south India, for example, because we feel that there are so many cities, tier II included, that have such an audience for art who do not come to the fair. So we have been focusing our efforts on that.

3.Divya Singh, Shrine Empire
She will be showing psychologically charged, emotional and haunting paintings which ruminate on the pandemic and more, with views of domestic spaces that could almost be photographs.

Through an open call led in collaboration with The Gujral Foundation and Artdemic, the 25-year-old artist, currently an MFA student at the Sarojini Naidu School of Art at the University of Hyderabad, was selected to design the tent façade, perhaps the largest canvas at the 2022 fair.