LETTER FROM THE EDITOR 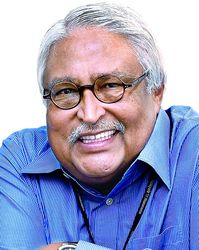 NOW, THAT WAS a surprise! And, to read it today of all days. The fifth paragraph of our cover story says that Dr Ramesh Awasthi—one half of THE WEEK’s Couple of the Year—printed and distributed an underground newspaper, Satya Samachar, during Emergency. What Awasthi did appealed to me so much because the Malayala Manorama newspaper edited by my grandfather was sealed by the Travancore government on September 10, 1938. The presses rumbled to life nine years later, in 1947, on the day that I am writing this letter—November 29.

During those nine years, the daily was printed underground in the neighbouring, princely state of Kochi. My father wrote in his autobiography: “Banned in its own town, locked up in its own house, the Malayala Manorama appeared in Kunnamkulam as a refugee.” A newspaper as a refugee!

Internationally, there are different genres of refugees now. And then there are those who are refugees in their own country. This issue of THE WEEK is the annual special on our person of the year. Very rarely do we have a couple, as we do this year. Drs Awasthi and Manisha Gupte founded the Mahila Sarvangeen Utkarsh Mandal (MASUM) in Malshiras, Pune. They sum up their philosophy in one line: “We are only the agents who are there to bring about a consciousness that life can be much better if there is an equal, democratic society with no violence, disparities or discrimination.” There will be no refugee, economic or otherwise, where this is a reality.

MASUM also empowered women to fight abuse and discrimination. A major story in this issue is the story of Akhila, and her journey to Hadiya. As I write this letter, all angles of the case, from personal liberty to conversion, are being discussed threadbare. While the Supreme Court’s decision will be final, the perception war will not end in the near future. Deep down, I feel the case has divided Kerala. And, there are vultures waiting in the wings.

This issue also carries a pictorial story of how one of the last narrow gauge passenger trains in India empowers two districts of Vidarbha, Maharashtra. Interestingly, a close relative of mine used to work for Killick Nixon, the British company that built and owned the train. I had even forgotten the name of the company, until Senior Photographer Amey Mansabdar brought it up.

The three-coach Shakuntala Express runs from Achalpur to Murtizapur. People who depend on this train to get to work would, perhaps, be forced to migrate, if it were to stop running. In the cover story, Gupte says the highlight of every evening in Malshiras would be a question: “ST aali ka? (Has the state transport bus arrived?)” The arrival of the bus signalled the official onset of night. Two live examples of how crucial transport is for our rural population. Does this matter to the India of metro trains and Uber?