The community has set a unique example of peaceful, disciplined living 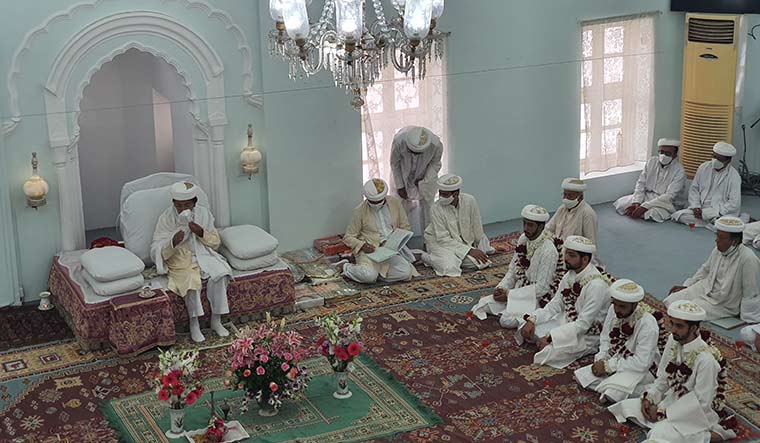 Women in traditional lehenga-chunni and little girls wearing churidar-kurta, embroidered skullcaps and face masks thronged the first floor of the Masjid-e-Ebrahim, a two-storey heritage structure at Mahdi Bagh in Nagpur. There was hardly any commotion, though; just an air of excitement. A wedding ceremony was about to begin.

Among the women were four brides, but it was difficult to pick them out. All women were wearing similar clothes. One had to look for the veritable glow on their faces to identify the brides.

On the ground floor were four bridegrooms, and they were even more difficult to spot. All men wore similar, spotless white cotton kurta-pajama, phenta (a traditional, turban-like headgear) and saaya (long jackets). 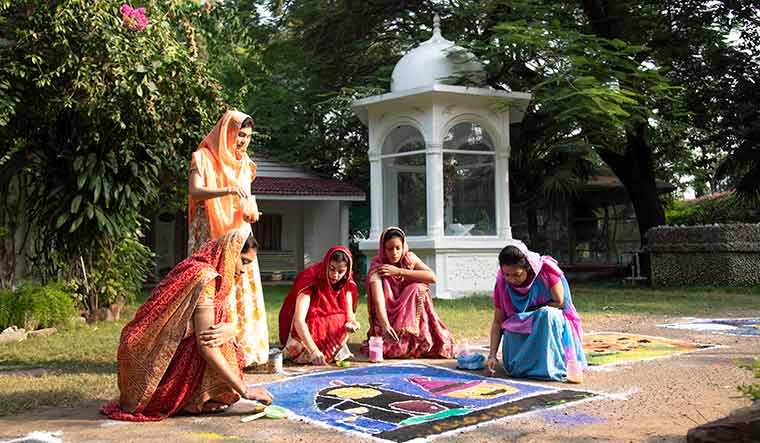 The couples got distinctive looks only after the short and simple nikah. They were given garlands of red and white flowers, which they wore across their body and wrapped around their wrists to symbolise their marriage.

The wedding ceremony was followed by a feast. The guests split into small groups and sat on the floor along with the newlyweds. Tables were laid only for the elderly. The families of the couples personally served the food. Everyone ate from large, common plates.

The modest ceremony belied the fact that the couples came from well-to-do families. “Marriage is a bond between two individuals that brings contentment and happiness,” said Nisreen Banu Jeevaji, one of the brides. “It is the understanding between the couple that ensures it; not expensive dresses and lavish ceremonies. Also, we do not want to indulge in anything that others in the community might not be able to afford.” 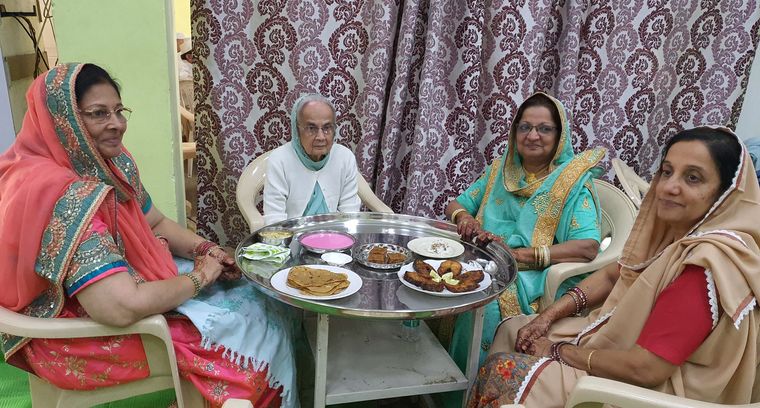 The four couples are members of the unique Mahdi Bagh Institution, a tiny community of progressive Muslims who belong to the Atba-e-Malak Badar—the smallest known religious sect in India. The Mahdi Bagh Institution has only around 1,000 members from 300-odd families, some of which are now spread across the world. More than half the community live in the main settlement at Mahdi Bagh, which is 130 years old and serves as a perfect example of peaceful, disciplined and simple community living.

The Mahdi Bagh Institution was founded in Bombay in 1891 by Maulana Malak Saheb (aka Abdul Hussain Jeeva Bhai) and Maulana Badaruddin Saheb (aka Badruddin Ghulam Hussain Miya Khan). The Nagpur settlement was established in March 1892. Atba-e-Malak Badar means “the followers of Maulana Malak and Maulana Badar”. The community’s main language is Gujarati, as most of the early converts hailed from Gujarat.

The institution has branches in Ujjain, Madhya Pradesh; Visakhapatnam, Andhra Pradesh; Hyderabad, Telangana; California, the US; and Sharjah in the UAE. Members also live in Pune in Maharashtra, and London. 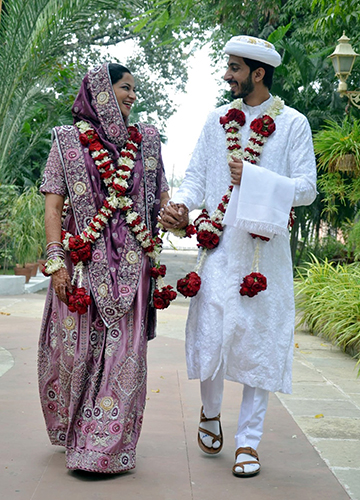 According to Maulana Amiruddin Malak Saheb, the current spiritual head of the community, the community’s basic religious beliefs are not very different from mainstream Islam. Members of the Mahdi Bagh Institution strictly adhere to all basic Islamic tenets and rituals—they follow the Quran, offer namaz, do roza (fasting), give zakat (donation) and undertake the Haj.

Certain beliefs, however, set them apart from other Muslims. One such key belief is that salvation is possible only through the daee, the community’s spiritual master. Members also believe that each of their daees is in communion with the imams, whom the community members regard as infallible leaders of Islam after the prophet.

Maulana Amiruddin said the community is more of an individual spiritual entity than a religious sect. “Our ancestry is traced to Hazrat Muslim ibn Aqeel, who was son-in-law of Imam Ali, the cousin and son-in-law of Prophet Mohammad,” he said.

Spread over 25 acres, the Mahdi Bagh Institution houses separate residences for each family. But there are no boundary walls separating them, and houses are never locked. The settlement has its own roads, water and electricity supply, rainwater harvesting facility, dispensary, and a large community hall.

“The heritage mosque, the Masjid-e-Ebrahim, was constructed by the first group of settlers. It was thrice renovated and expanded, but its heritage features remain intact,” said Moinuddin Malak, president of the Mahdi Bagh Youth Club and Maulana Amiruddin’s son.

A thriving community, the Mahdi Bagh Institution maintains sports and recreation facilities—swimming pool, fishing pond, golf course, cricket and football ground, tennis court, volleyball and badminton courts, facilities for indoor games such as table tennis, and picnic spots on the banks of a lake. For a visitor, it is evident that the community focuses on keeping the campus clean and eco-friendly.

If a new couple wants to move into a separate house, the community allots them a plot. The houses can be built in any style, provided they adhere to the community’s overall development plan. The cost of maintaining common amenities are divided among members equally. The daee administers all land- and property-related matters in the settlement.

The community’s guiding principles are simplicity, peace, love, brotherhood, gender equality, respect for all faiths and an emphasis on education. Interestingly, membership is not a birthright for those born into the community. “A child born to parents who are members of the institution has the opportunity to attain membership only as an adult, and only after taking a pledge that he or she has fully understood the community’s fundamental spiritual beliefs and principles and is willing to accept them and abide by them,” said Moiz Mannan Haque, a member of the Mahdi Bagh Institution and head of the department of mass communication at Nagpur University. “In simple terms, being born into the institution is like getting a passport; and taking the pledge, with the permission of the spiritual master, is like getting a visa [to join the community].”

The community is neither exclusivist nor expansionist. There have been several instances of individuals being accepted into the fold through marriage, but only after taking the mandatory oath. According to Maulana Amiruddin, members celebrate all festivals irrespective of religion. Also, two of the community’s most venerated early spiritual leaders—Maulatena Maryambai Saheba (born Shivbai Raghunath) and Maulana Abdullah Yahya Saheb (born Vishamrao)—were Hindus.

Wedding ceremonies are always simple, and more than one couple is married in a ceremony. Dowry is prohibited; only Rs7 or Rs11 is given as a mahr—an obligatory payment made by the groom to the bride. The bride and groom get only one set of new clothes.

Women are considered equal to men. They offer prayers in the mosque, do not wear burqa, and are well-educated. Ayun Malak, wife of Maulana Amiruddin, said spiritual leaders of the community decided to do away with burqas around 30 years ago. Ayun, whom members reverentially address as ‘aai saheba’ (mother), said the status of female members could be gauged by the fact that the seniormost spiritual figure after the daee is a lady—Moulai Saheba Zainab Lamak, the granddaughter of founder Maulana Malak.

Right from its inception, the community has made stellar social contributions. Early spiritual leaders were known for their wide-ranging social and philanthropic work in the fields of health, education and environment. They were instrumental in the setting up Rotary Club units and Masonic lodges.

They also supported the freedom struggle. Maulana Badruddin, who was one of the founders of the Aligarh Muslim University, made his opposition to the colonial rule known by giving up a plum post in the British treasury department in Africa. Yet, many years later, his outstanding service to society prompted Britain to confer the title of ‘Khan Bahadur’ upon him. At the peak of India’s freedom struggle, the Malak family hosted Jawaharlal Nehru at the Mahdi Bagh Institution.

The community has long been deeply involved in business and trade. Maulana Mohammad Ebrahim Riza, who succeeded Maulana Badruddin, set up the Mahdi Bagh Shop at Sadar, which became Nagpur’s first and largest department store, more than half a century before the concept became popular in India.

The third daee, Maulana Hasan Noorani Malak, transformed the store into a first-of-its-kind luxury textiles showroom in central India. The opening of the showroom in 1982 was a watershed moment in Nagpur’s business history.

In 1986, the daee Maulana Hasan set up Bagh Fruits, a fruit and vegetable processing unit that not just created a number of jobs for educated youth, but also gave the region’s orange-growers an opportunity to add value to their produce.

The present daee, Maulana Amiruddin Malak, is carrying forward the community’s rich legacy. He has been encouraging research in Persian and Arabic (language as well culture), and the study of Sufism.

Three of Mahdi Bagh’s sons have fought for India. Jiva Malak was awarded four medals for gallantry in the 1971 India-Pakistan war. Captain Tayyab Ali was a decorated officer of the Army Medical Corps. Flight Lieutenant Turab Ali, who was decorated for his bravery in the 1971 war, was one of the ten Air Force pilots selected to be trained on the Jaguar fighter aircraft. He died in 1976 when his MiG 21 crashed near AFS Kalaikunda, West Bengal.

The community has also produced prominent sports personalities. Moin Malak was captain of the Indian golf team that defeated Pakistan in a 2007 amateur championship. Cricketer Faiz Fazal, a batting all-rounder, made his international debut in 2016 against Zimbabwe. It was under Fazal’s captaincy that Vidarbha won its maiden Ranji Trophy in 2018.

All of these individuals have been flag-bearers of the Mahdi Bagh Institution’s uniquely communitarian model. Members say it is the community’s guiding concepts that bind all of them together. One such concept is jodidars (partners)—children born around the same time who become life-time companions.

“These jodidars grow, play and study together, and their companionship allows them to grow as balanced individuals,” said Shaira Mehdi, a baker and a mother of three. “During the pandemic, for instance, the jodidars always had each other to fall back on. So, when educational institutions closed down, they were not lonely at all.”