Saraswati, goddess who reminds us of importance and joy of reading, learning

R. Viswanathan says image of Saraswati as goddess of wisdom, arts fascinated him 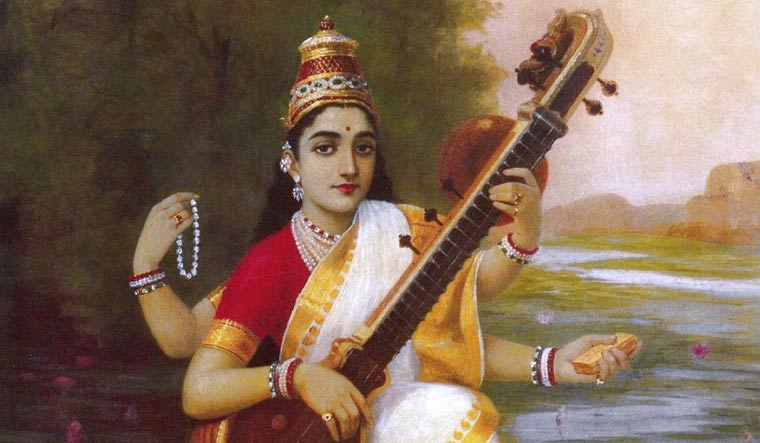 Wednesday was Saraswati Puja. I do not believe in pujas and gods. I am an atheist, typical of the generation that was influenced and shaped by the Dravidian social reformist movements in Tamil Nadu.

Beyond my atheistic mindset, there is a secret image of Saraswati in my heart. I remember fondly the Saraswati Pujas in my childhood. The image of Saraswati as the goddess of learning, wisdom and arts had fascinated and inspired me as a child and has been etched strongly in my memory. I liked the picture of the goddess sitting on the white lotus flower with a book in the hand.

As a kid, I was fond of books and tried to read whatever I could get hold of and whenever I could. But my illiterate uncle, who brought me up, did not believe in Saraswati. He worshipped Lakshmi, the goddess of wealth. He believed that pursuit of agriculture was the best way to invite Lakshmi into the home. Unknowingly, my illiterate uncle believed in the Thirukkural.

(Life with a plow is the real life

My uncle would scold me if he saw me with a book in hand outside the school. So I would hide the book behind my back while walking around the fields.

I had access only to the school textbooks. No one bought books other than textbooks in the village. There were no books at home in the house of my illiterate uncle and aunt. Neither my elementary school in Raramuthiraikottai nor my high school in Mariammankovil had libraries. Fortunately the village panchayat board building had some books including epics such as Ponniyin Selvan and Sivakamiyin Sabadam. But they had only some parts of the several volumes.

So I would go to other village panchayat boards to get the missing parts. Poondi Pushpam college where I went after school had a large library. I was thrilled to read so many books and magazines outside my subject, which was chemistry. I read so many Tamil poems... And I got carried away... I wanted to become a poet. In fact, I had applied for admission for MA, Tamil literature, in Pachaiyappa’s College in Chennai. But my Tamil professor in Poondi college advised me against that and persuaded me to study MSc chemistry, which would have more job opportunities.

While working as a junior lecturer in Pachaiyappa's College, I used to carry non-chemistry books to the staffroom for reading to prepare for the civil services examination. Some of my senior colleagues would laugh behind my back and thought that I was delusional. So I had to hide the general knowledge books from the colleagues.

I was lucky that my reading resulted in selection to the Indian Foreign Service. During the whole career of 35 years, I had to constantly keep up reading every day to update my knowledge of international affairs. Postings in different countries every three years meant that I had to study and learn about different cultures, markets and political systems.

Since my retirement in 2012, I follow the advice of Bharathiar:

(Reading in the morning

Playing in the evening

Make this as the habit)

I read in the morning, play golf in the afternoon and listen to music in the evening with a drink, which Bharathiar missed out mentioning...

I keep a little bronze idol of Saraswati on my desk, which reminds me every day of the importance and joy of reading and learning. But the more I read, the more I realise the wisdom of the Tamil poet Avvaiyar.

(What one has learnt is just handful of sand... what is more to learn is vast like the earth)