LETTER FROM THE MANAGING EDITOR 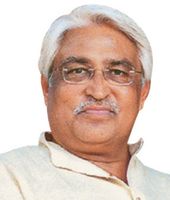 The mind is a strange space, almost organic. It files away scraps and threads and then, suddenly, when you are scrabbling through your mental attic for something, it starts quilting these seemingly disparate memories, sounds and smells into a moveable, mental feast. It might not be interesting to anyone else. But, to you, it is rebirth, for you are reliving yesterday. What if pensieves existed outside Harry Potter? It would be tough to find a basin big enough to hold my thoughts, I guess.

OK, I’ll stop the rant and tell you what happened. A blank sheet of paper and I were done staring at each other when John Lennon appeared to me. He appeared on multiple screens. On my phone, tablet and so on. It’s been 35 years since he was shot dead. From there, my mind jumped to September 1999, when I ran into a story in Iceland. At 6.5”, Kari Stefansson was an impressive presence, physically and intellectually. As CEO and founder of Reykjavik-based deCODE Genetics, he had made a DNA registry of Iceland, which has one of the purest human gene pools in the world. The registry was an ideal resource for researchers hunting disease-causing mutations in the genes.

An interesting practice I observed then was that Icelanders had maintained family records for almost the entire period, since the first Viking settlement in 874. So, Stefansson had the genetic data and the family trees to track who married whom and so on. So, pharma companies were wooing him, I was told. An agreement with a Swiss firm had got him $200 million—nearly two decades ago!

While Stefansson was banking on his blend of science and tradition, THE WEEK’s Man of the Year 2015 is blending ancient knowledge with modern realities. Naresh Biswas’s work among the Baiga tribals of Madhya Pradesh and Chhattisgarh had helped reduce poverty and malnutrition among them. The modern pesticide-intensive and water-intensive form of agriculture had beggared the tribals. Biswas took them back to traditional millets and slash-and-burn farming. He has given them swaraj, bewar swaraj. I am sure you will admire Biswas’s work as much as I do.

While Stefansson created a DNA registry, Biswas has created a seed registry. He identifies tubers, millets and other forest produce traditionally consumed by Baigas and popularises the diet among the youth through food fairs. Tribal farmers are encouraged to share heirloom seeds.

As a history student, I am surprised that the heirloom plant debate has not gained traction in India. The only ones talking about it are the activists. As a non-farmer with a farming background, I have seen quite a few heirloom rice varieties vanish from commercial cultivation in my own lifetime. And, I have heard of many more that have disappeared. Climate change might force us to bring back flood-resistant and drought-resistant varieties into active cultivation. But, where are the seeds? I know there are isolated banks. But, they might not be enough when push comes to shove. And, that is why the likes of Biswas are important. They hold the key to our tomorrow.

And, in closing, back to the mind. What links Lennon and Stefansson? Nothing, except the fact that Stefansson’s daughter Solveig is married to George Harrison’s son Dhani. The mind jumped from Lennon to the Beatles to Harrison to Stefansson and his gene bank and to Biswas and his seed bank. The mind is magical, isn’t it?