Vandana Shiva: How I met Sundarlal Bahuguna and discovered Chipko 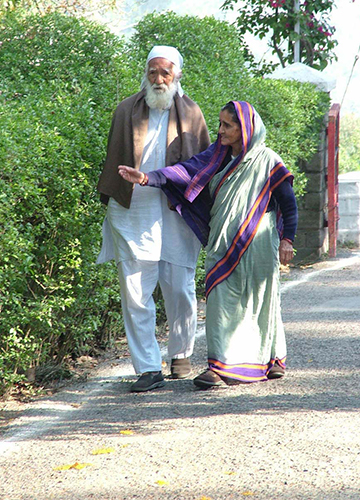 I first met Sundarlal Bahuguna at his ashram in Silyara village, after I volunteered for the Chipko movement.

It was in the early 1970s, when I was preparing to leave home for Canada to pursue a PhD in quantum theory. As the daughter of a forest officer, I had grown up in the Himalayan forests, and before leaving, I wanted to go on a short trek to a favourite forest and take the memory with me.

It was a dense oak forest in the hills between Chamba and Mussoorie, and it had a forest house above a stream. During my trek, I found that the oak forest was nearly gone, and the stream it birthed had been reduced to a trickle. I felt as if I had lost a part of me. The forests and streams had shaped me and made me who I was.

To return to Delhi, I waited for a bus near a roadside dhaba at Chamba in Garhwal. The chaiwala and I struck up a conversation, and I told him how sad and painful it was to see the woods disappear. “Now there is hope, though,” he replied. “Chipko has started.” And that was how I first heard of the movement. I heard of women stopping logging in Reni and other villages. I heard of Sundarlal Bahuguna.

I had to catch my flight to Canada and join the university, but I vowed to return, find “Chipko”, and volunteer for the movement during my summer and winter vacations.

The first time I came home, I went to the Silyara ashram that Bahuguna and his wife, Bimla, had founded. Since that day, he has been teaching me and my generation about how nature’s economy is the real economy that supports all economies, including the market economy.

Each time I came to volunteer for Chipko—first while doing my PhD and later while working at the Indian Institute of Science and IIM Bangalore—Bahuguna would ask us to undertake padyatras. From mid-1970s to 1981, we undertook padyatras under the guidance of the Bahugunas, documenting the movement and learning from women.

Through Chipko, I learnt to practise satyagraha—how to refuse to obey an unjust law or follow an unjust policy that was based on violence against nature and people.

Bahuguna was the bridge between our freedom movement and today’s ecology movement. He was inspired by Sri Dev Suman, and worked with Vinoba Bhave and Gandhi’s disciples Mira Behn and Sarla Behn. I have been blessed to learn Gandhi’s principles, first from my mother and father, and later from the Bahugunas. These principles have seeped into my thinking and work.

The Bahugunas taught me that ecology is permanent economy, that simple living in the service of others is central to making a shift from ego-centric thinking and living, to eco-centric thinking and living. Ego-centrism leads to greed, consumerism and stealing from others. Eco-centrism leads to caring, sharing and not stealing from others.

I learnt three Gandhian principles from the Bahugunas—‘swaraj’, or self-rule or self-organisation; ‘swadeshi’, or self-reliance or reliance in the local economy; and ‘satyagraha’, the yearning for truth and the obligation to oppose an unjust law through a constructive vision of nonviolence. 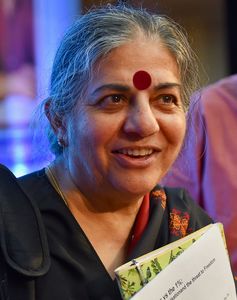 I have had the privilege of participating in the Chipko movement to protect the Himalayan forests; of doing a study on Doon Valley mining for the ministry of environment, which led to a satyagraha for the mountains; and of supporting Bahuguna’s satyagraha to protect the Ganga from the ravages of Tehri Dam. These satyagrahas that Bahuguna led shaped the contemporary ecology movement in India.

His ashram was destroyed in an earthquake in 1991, but he continued to spread his message of nonviolence and love for nature from a tent on the banks of the Ganga, while on a satyagraha to protect the river from Tehri Dam.

His work was not limited to India. He marched to protect forests in Nairobi. I remember a journey with him to Mexico in the mid-1980s at the invitation of [Austrian philosopher-priest] Ivan Illich and [Mexican activist-thinker] Gustavo Esteva. Richard St Barbe Baker, the English biologist who founded the organisation Men of the Trees, wrote: “As far as I know, Sundarlal is the only person in the entire world who has gone on a fast unto death for trees. Sundarlal is my guru. And the Chipko movement is the leading movement for protecting our forests.”

Chipko and Bahuguna received the Alternative Nobel Prize in 1987. In 2009, he was honoured with the Padma Vibhushan. In spite of the awards and recognition, the Bahugunas lived simple and graceful lives. Accompanied by Bimla ji, he would frequently visit the Earth University at Navdanya biodiversity farm in Doon Valley and teach courses on Gandhi, globalisation and ecology. And whenever I had the opportunity, I would visit them.

His life’s work was to make us understand that we need to listen to nature. He wrote:

But who will speak for the tree that will be cut?

Who will come forward for the dying river?

Who will protect the mountains?

It is now time to hear the voice of the tree being cut,

the voice of the river,

the scream of the mountain that is sliding.

His was the voice of nature. His life was a continuous satyagraha for life and freedom. His legacy is that he has shown humanity the way forward: Living with respect for, and in harmony with, nature.

Vandana Shiva is an award-winning scholar and activist. Her forthcoming memoir of Sundarlal Bahuguna will be published by Niyogi Books.