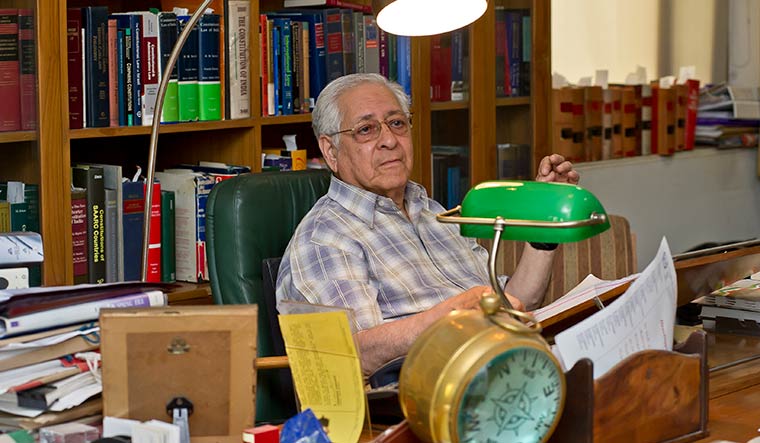 SOLI WAS AN outstanding lawyer, and we all know it. But more than that, he was an outstanding human being— warm and compassionate. You might wonder why I refer to him by his first name, especially given the age difference and the stature that he had. Well, the reason is quite simple. It was difficult to address him or refer to him in any other manner.

On the first few occasions that we met, I did refer to him as Mr Sorabjee or sir, but such was his warmth that it became difficult to address him formally. And, I gradually shifted, without realising it, to addressing him as Soli. Even in the court, where everything is so formal, I have heard judges address him as Soli.

On many occasions, I had the privilege of briefing Soli in some high-stakes cases or important matters. I had to be fully prepared to answer every question that he might ask. His grasp was, of course, phenomenal, as was his knowledge and understanding of the law. But what many of us younger lawyers found very interesting was his court craft and his ability to lead the judges to the heart of the matter, and then convince them why he was right.

Soli was unflappable even when the going was not good, and he had the patience and the confidence that he would drive his point home and not make it easy for the judges to decide against him.

I recall a performance by Soli in a case related to the telecast rights of the 1996 Cricket World Cup. Doordarshan had a problem with a marketing company named WordTel, but did not succeed before the single judge of the Delhi High Court. In appeal, the then solicitor general Dipankar Gupta reeled out the facts and placed the law before the judges so eloquently that during the lunch break, all of us lawyers, regardless of which side we were representing, knew that Doordarshan would succeed in the appeal. In the afternoon session, Soli began his submissions by placing the broad facts of the case before the court. Then he explained the injustice being caused to his client, and by the time he finished, everybody knew that Doordarshan would be given a darshan of the door by the court. And indeed, that is precisely what happened. Soli won the day for his client.

A few years later, I was recommended for appointment as a judge of the Delhi High Court. There was some delay in processing the papers due to some obscure and unwritten rule. Soli asked me if it was alright for him to suggest my name as an additional solicitor general. Of course, it was difficult to refuse Soli, and he gave me the privilege and opportunity to work with him for a few months until my appointment came through.

It was an honour to have been associated with Soli. He will always be remembered by all those who have come in contact with him.

—Justice Lokur is a former judge of the Supreme Court of India.