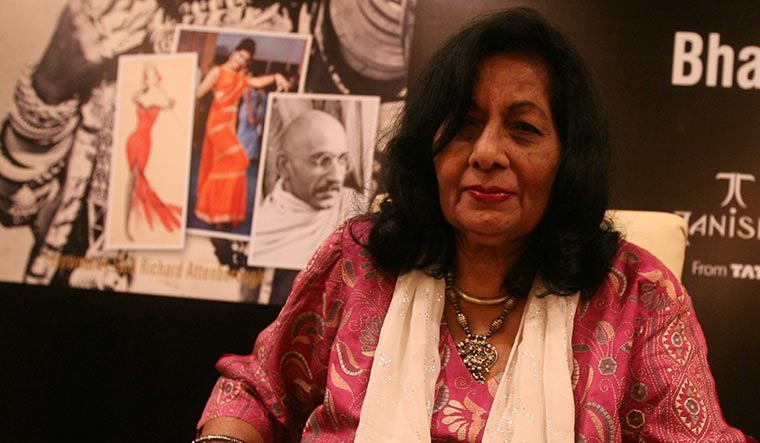 In 2014, I requested Bhanu Rajopadhye Athaiya, the only Indian woman to have won an Oscar, for an interview. She promptly accepted, but asked me not to bring a photographer because “she did not want to be clicked”. I vividly recall the dazzling interior of her workshop in Mumbai, with its huge posters, meticulously-drawn costume sketches, paintings, lavishly-illustrated books and press cut-outs.

Her apartment was two storeys above her workshop. She was escorted into the room by an assistant and greeted me with a nod. But she did not look too pleased to see me. “I have nothing more to say than what my work suggests,” she said. “I have done enough by way of my profession.” But when I brought up the topic of Richard Attenborough’s Gandhi (1982), the film that won her the Oscar for best costume designer alongside British designer John Mollo, her eyes lit up.

“Those times were different,” she said with child-like enthusiasm. “Do you know what it is like to dress over 5,000 people in khadi at a go? For the scene of the swadesi movement, I worked with a team of nine to dress 2,000 people.”

She called for two cups of tea, and then looked at me with a blank expression. Turning to her helper, she asked who I was and what was I doing there. In 2012, she had been diagnosed with a benign brain tumour; it had impacted her balance and memory and kept her home-bound. Yet, in that moment, Athaiya, the ebullient designer who loved to dress others, looked every bit endearing in a colourful one-piece printed dress and bright red lipstick.

Athaiya, who passed away on October 16 at the age of 91, transitioned from being a fashion designer for Fashion and Beauty and Eve’s Weekly magazines to the most coveted costume designer in films. She went on to win the national award twice—for Gulzar’s Lekin (1990) and for Ashutosh Gowariker’s Lagaan (2002). She has more than a hundred films to her credit and has created dozens of iconic looks, like Mumtaz in her tightly draped, fiery orange sari in Brahmachari (1968), Sridevi’s stunning ensembles in Chandni (1989) and Simi Garewal’s blazing outfits in Siddhartha (1972).

Bhanu’s daughter Radhika says that even when she had company, she would doodle sketches and motifs on pieces of paper. Once, she saw her mother sitting with her eyes closed and asked her whether she was sleeping. “No, I’m dreaming,” her mother told her. She further explained that she was dreaming about designs. She recalls only two times when her mother got really upset. “Once, when she hit me for the first and last time,” she says. “She cried more than I did. And second, when Rabindranath Tagore’s Nobel prize got stolen from Shantiniketan. That really got to her. She came to believe that you cannot keep something like that safe in this country.”

And that is how, in 2012, after her diagnosis, she returned her Oscar to the Academy for safekeeping. While she was alive, she had tried a number of times to preserve her work across films and theatre so that it could be made available to those interested. “Now, foreigners are showing interest, so we have begun to get all her stuff restored,” says Radhika. With Athaiya, a legacy of incredible talent is lost, says designer Anamika Khanna. “Unfortunately I did not have a chance to interact with her, but I come with huge respect for her deep understanding of costume and authenticity.”