Foreign legal firms have been courting India since 1991, but with no luck. Modi is opening the door for them

When India’s economy opened up in 1991, foreign law firms woke up to the potential of the new market for legal services. But, the Bar Council of India and the Society of Indian Law Firms lobbied hard to keep them out. Then, dramatically, last February, the BCI and the SILF withdrew all objections.

Prime Minister Narendra Modi has set up an inter-ministerial group to prepare a proposal on entry of foreign law firms into India. It was at a consultation with this group that SILF chairman Lalit Bhasin and BCI chairman Manan Kumar Mishra said that they had no objections.

Sources said that the objections fell after the professional bodies were told that the liberalisation of India's legal services would happen with or without their support. The gates are expected to be open “within two years”. Modi is reportedly taking a personal interest in the issue.

“Why should we go outside the country for global arbitration? We shouldn’t think that if foreign lawyers come here, they will take away our jobs,” Modi said earlier this year.

In November 2014, at a national services conclave, the commerce ministry presented its plans for a phased opening of the legal sector. After the conclave, representatives of the commerce department, the BCI and the SILF met. Then, the Union law minister and the secretary for legal affairs met BCI and SILF representatives. 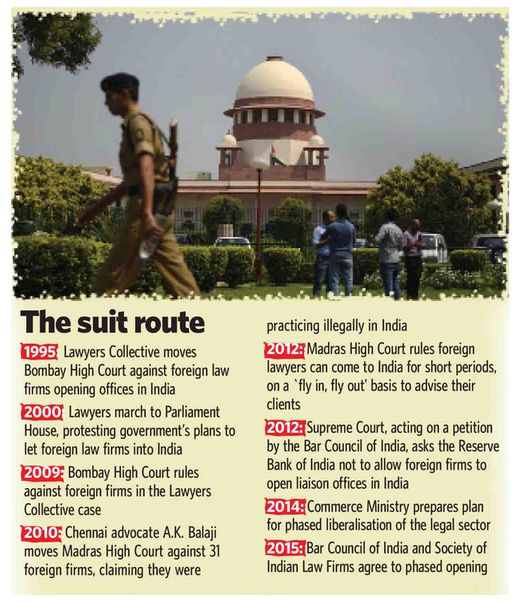 Apparently, the UK and the US have lobbied hard with the Modi government. UK law minister Shailesh Vara, who has Gujarati roots, is said to have played an important role in the discussions. Industry experts say that the UK, especially, is seeing a negative growth in the profession and needs new markets such as India and China.

The legal sector in India is also under pressure from the World Trade Organisation. The commerce department recently sought the BCI's response on queries from the WTO on the issue.

Bhasin said SILF changed its stance because of the newfound confidence in the Indian law firms, many of which are run by bright young names. “The BCI had earlier opposed it in the interest of our lawyers,” said Mishra. “The condition of our legal firms was not good enough to compete with foreign firms. The level of education was not so high. We have good law schools now, and they are producing very good lawyers. Now, we are no less capable than any of the lawyers [educated abroad].”

Union Legal Affairs Secretary P.K. Malhotra told THE WEEK that SILF, BCI and the government were in agreement about the phased opening spread over five to seven years.

The first phase will allow foreign law firms to undertake international arbitration, mediation and advisory services in foreign law and international law. It will be accompanied by reforms in the legal sector. Phase II will open certain advisory and non-litigious services.

Those involved in the discussions said it is unlikely that foreign lawyers and firms will be allowed representational or litigious practice of any law, including Indian law. Meanwhile, there is stiff opposition to firms with multidisciplinary practices. The fear is that allowing such firms would open the door for the Big Four into the legal services sector—Deloitte, PricewaterhouseCoopers, Ernst & Young and KPMG.

The entry of foreign firms will be based on the principle of reciprocity. “It will depend on individual countries,” said Mishra. “For example, in Japan, the rules are a bit liberal for us. So we have already conveyed to the law ministry that we are ready to allow Japanese firms to come here.” The BCI has been tasked by the law ministry to frame the rules of reciprocity. A BCI delegation visited the UK and the US in June. It will visit Australia soon.

The BCI and SILF have withdrawn objections also because Indian firms want to go abroad. “We have a very good set of law firms, which are very, very competent and capable,” said Bhasin. “They are giving big firms like A&M a run for their money. They are considered to be really the topmost and are well-respected overseas and have foreign clients.”

International law firms are enthused with the turn of events. One of the leading international firms, Clifford Chance of the UK, which has been at the forefront of the campaign to gain entry into India, has welcomed the developments. Geraint Hughes, Clifford Chance's managing partner in Singapore, said, “We support a phased approach to liberalisation and look forward to a time when the Indian government is ready to take concrete steps in this direction.”

Richard Gubbins, who heads international law firm Ashurst's Indian practice, said, “While the Indian economy has liberalised since 1991 and is increasingly viewed as an attractive investment destination, we feel that our clients must be given a level playing field and have access to legal services of their choice.”

Interestingly, Gubbins said many foreign firms had set up India desks in other jurisdictions and recruited India qualified lawyers. “This is what the Indian legal services market is missing out on and this will only get worse over time,” he said.

Young Indian lawyers with dual degrees, many of whom man the India-specific services of international firms, have been waiting for the opening up of the Indian legal sector. Shinoj Koshy graduated from the National Law School of India University in 2004, worked in London till 2013 and came back to India. Partner at Luthra & Luthra Law Offices, Koshy said many Indian lawyers working abroad chose “to stay overseas because comparable opportunities were not available back home”. He said, “Ageing parents, family support and providing a cultural context to growing kids are some of the softer reasons which will prompt a lot of them to come back.”

The issue first hit the roof in 1995, when the Lawyers Collective went to the Bombay High Court against three foreign firms, accusing them of having illegal representative offices in India. The court ruled against the foreign firms in 2009.

In 2010, Chennai lawyer A.K. Balaji petitioned the Madras High Court against 31 foreign firms. However, in 2012, the court gave a reprieve to those firms and said that foreign lawyers could come into India on a 'fly in, fly out' basis to advise their clients.

Two Union law ministers of the United Progressive Alliance government were for liberalisation of the legal sector—H.R. Bhardwaj and his successor, M. Veerappa Moily. But, their efforts ran into resistance from the BCI and SILF.

Experts say the opening up will have a big impact on the legal industry. They say international firms will bring in systems and processes like robust training, knowledge management, client care principles and sound management practices. The fear is that foreign firms will poach lawyers from established firms and the smaller firms will simply be gobbled up. But, a majority of medium and small businesses which cannot afford big firms will still depend on domestic firms.

Some corners are calling for wider consultations on the issue. “The government should consult members of Bar Councils all over the country,” said E.M.S. Natchiappan, chairman, parliamentary standing committee on law and justice.

A lot depends on how the Supreme Court, which is hearing the matter, decides on the issue. And, the foreign firms would be hoping that this is not yet another false dawn.