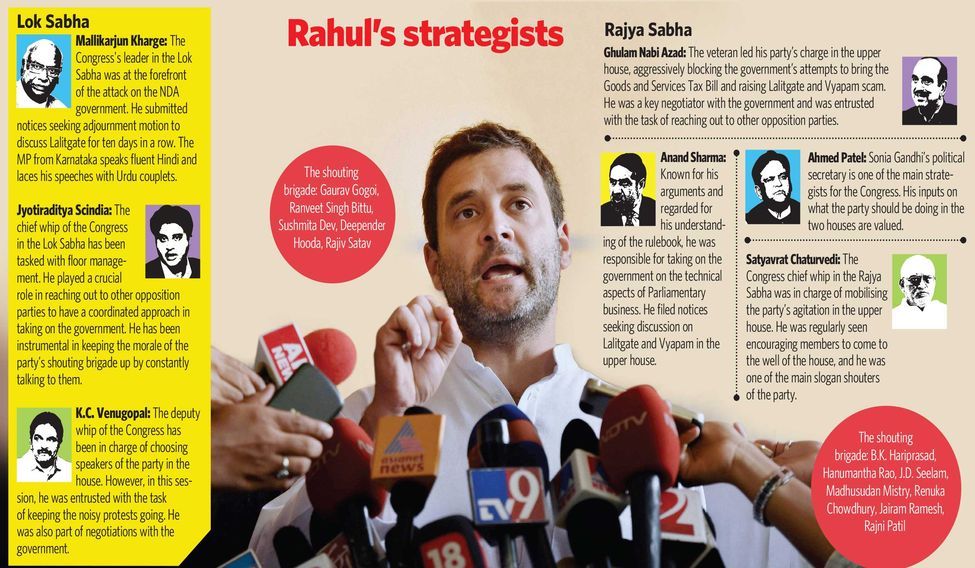 An aggressive Congress makes it tough for the government in Parliament

On the last day of the monsoon session of Parliament, after the Congress MPs had walked out of the Lok Sabha and staged a sit-in outside, party vice president Rahul Gandhi decided that he should address the media. The media-shy Rahul had already become a thing of the past, with him offering quotes on almost a daily basis in the last session. But what was interesting this time was what he did before the media interaction. As he headed towards the designated press area, he looked around and found that Mallikarjun Kharge, the party’s leader in the Lok Sabha, was not there. Rahul decided to wait for Kharge, utilising the time to gather inputs from K.C. Venugopal, Jyotiraditya Scindia, Deepender Hooda and Sushmita Dev.

Kharge reached after five minutes, and Rahul asked him what he should tell the media. The senior leader from Karnataka said he should focus on the silence of Prime Minister Narendra Modi. And Rahul did exactly that. “I used to think that Modi was a strong person,” he said. “But the reality is that he is afraid of facing us.”

It revealed a change in Rahul’s approach to politics. If he surprised with his aggression in the previous session of Parliament after a two-month-long sabbatical, he was more accommodating this time and was willing to strike a balance between the young and the old. This is significant because it was said that the seniors in the party were wary of the changes that he would bring about.

Sonia Gandhi led the Congress’s charge in Parliament. She egged on her MPs in the Lok Sabha and argued with the treasury benches as well as Speaker Sumitra Mahajan, besides reaching out to the opposition parties. While the young MPs formed the party’s shouting brigade, Kharge reacted strongly to the counter attacks from the government.

Rahul, meanwhile, was unrelenting in his attacks on Modi and External Affairs Minister Sushma Swaraj. Many people had thought that Swaraj had bought peace from Rahul after a brief meeting in the Parliament lobby, away from the eyes of the media. She held his hand and had a pleasant chat, and even asked him why he was angry with her. Rahul is said to have smiled, and replied that he was only stating the truth. So, in the morning of the debate, the mood was that Rahul had shed his aggression. But then that was not to be.

When Swaraj launched a bitter counter-attack, targeting the Gandhi family, the Congress benches were shocked. Rahul responded in kind. He even recalled their lobby meeting and recounted how the previous day she had held his hand and asked him why he was angry with her. “I said I am not angry with you. I respect you. I looked into your eyes and said that I am stating the truth. You lowered your gaze.”

Rahul set the tone for the session by drafting the 'resignation first, discussion later' line. At a strategy meeting of the party, some senior leaders expressed the view that the party should not persist on its demand for the resignation of Swaraj citing her friendly nature towards them. Rahul, however, vetoed the idea. After all, a Congress chief minister and two Union ministers had to resign because of the BJP’s campaign against them.

Inside Parliament, Sonia played the lead role as her party MPs kept up the protest in the Lok Sabha and did not allow the Rajya Sabha to function. When Mahajan suspended 25 Congress MPs, Sonia reached out to other opposition parties. When the Samajwadi Party broke ranks with the Congress, she reached out to Trinamool Congress chief Mamata Banerjee to ensure her party’s support.

And, she left everyone surprised when she flew into a rage and rushed to the speaker’s chair to protest the comments passed by some BJP MPs about her family members. Sonia would have been expected to ignore such remarks. But her protests, perhaps, were aimed at stalling the discussion. And if that was the intention, she was successful.

“We are not being aggressive just to match BJP's aggression of the past; we are forced to take our position because of the government's brazen attitude,” she said at the Congress parliamentary party meeting. “There is a mountain of incontrovertible evidence in the public domain for the PM to require resignations of the external affairs minister and the two Cms.”

Meanwhile, Rahul was on his feet every time his party was agitated by something that either the government had said or the speaker had ruled. During the adjournments, he came down to the well of the house to talk with the young leaders who were leading the party’s protest in the house. When the house adjourned over the issue of whether Lalitgate should be discussed under Rule 193 or there should be an adjournment, some Congress leaders complained to the speaker about pushing and jostling by BJP MPs. Rahul suggested to Kharge to lodge a complaint with the speaker and report it to the media.

Sonia held strategy meetings with a select group of MPs from both the houses in her room in Parliament every morning during the monsoon session. Rahul attended these meetings, which were about the ways in which business in both the houses could be blocked.

“Sonia Gandhi united the opposition to take on the government. Rahul motivated us to fight hard, to work hard,” said Congress MP Gaurav Gogoi. He said there was nothing new in the aggression displayed by the Congress leadership: “We had seen the aggressive side of Rahul in the previous session. Ditto for Sonia. She led a march of opposition MPs to Rashtrapati Bhavan against amendments to the Land Act,” he said.

However, the Congress had to back down from Rahul’s stance of 'resignations first, discussion later' and agree to a debate on Lalitgate under adjournment motion in the Lok Sabha. Kharge, however, insisted the party had not backtracked. “There is no dilution in our stand,” he said. “I had been giving notices for adjournment motion for the last ten days. Our stand was that if they want to have a discussion under Rule 193, the resignations should come first.”

Another senior leader said the party had to agree to a debate under adjournment motion because the other opposition parties were for discussion. “We would have been isolated. Anyway, we got a chance to say what we had to on the issue,” he said. Agreeing to the discussion has also spared the Congress the embarrassment of coming for the winter session with Swaraj continuing as foreign minister.

For the time being, however, an aggressive Sonia-Rahul duo has thwarted the Modi government’s plans, which included changes to the Land Act and passage of the GST bill.