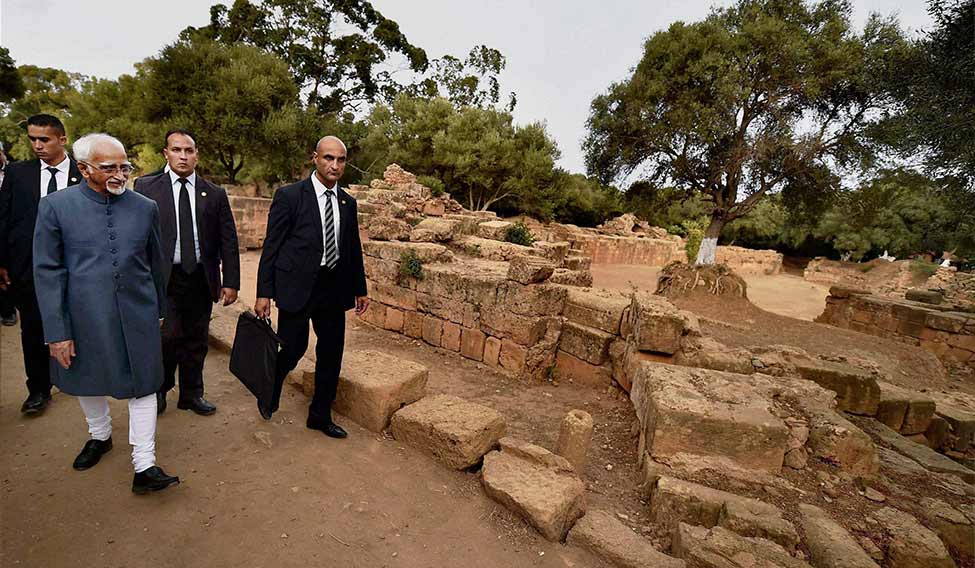 Hungary, in central Europe, and Algeria, in north Africa, have nothing much in common. They are different historically, politically and geographically. However, Vice President Hamid Ansari’s visit to Hungary and Algeria from October 15 to 19 had a common thread running through it: rediscovering the strong bonds that India has had with the two countries and finding new areas of engagement to renew bilateral relations.

Nostalgia ruled as Ansari met the top leadership of Hungary and Algeria during his five-day visit that began in Budapest and ended in Algiers. Meetings in Hungary involved paying glowing tributes to M.A. Rahman, who was India’s chargé d’affaires in Budapest during the Hungarian revolution of 1956, when the country revolted against Stalinist rule. Rahman had played a crucial role in getting prime minister Jawaharlal Nehru’s backing for Hungary’s fight for freedom.

Ansari’s visit to Budapest came less than ten days before Hungary celebrated the 60th anniversary of the revolution. He was obviously happy that the Hungarian government had invited Rahman’s next of kin to participate in the celebrations.

It was doubly nostalgic for Ansari since he had worked under Rahman as a young diplomat and calls him his ‘mentor’. Prime Minister Viktor Orban said his country could never forget Rahman and Nehru for advocating the Hungarian cause in the United Nations.

Another Indian figure who was remembered for his Hungary connection was Rabindranath Tagore, who had spent some time recovering from a heart ailment in Balatonfüred, a picturesque town by lake Balaton, which is a two-hour drive from Budapest. Tagore left his imprint on Hungary and inspired a flurry of cultural exchanges between the two countries.

Nostalgia guided the meetings that Ansari had in Algiers, too. Despite not keeping well, Algerian President Abdelaziz Bouteflika had a lengthy meeting with Ansari, primarily because he got emotional about the bygone days. Bouteflika, who was foreign minister when Nehru was prime minister, recalled his interactions with Nehru, Indira Gandhi and Rajiv Gandhi.

The Indian side had expected the meeting to be just about ten minutes long, given the Algerian president’s ill-health. Though Ansari tried to get up several times during the meeting out of concern for the host, the meeting went on for exactly 62 minutes. And Bouteflika got up from his wheelchair to see Ansari off. A major theme of the meetings Ansari had in Algeria was about the strong ties that India had with that country traditionally and the support it gave to that country during its struggle to gain independence from French rule.

Ansari said the main purpose of his visit was to rediscover India’s old ties with these two nations. “India has had strong cultural and political relations with both Hungary and Algeria. But the bilateral relations with these two countries had plateaued of late. This visit was aimed at pumping new energy into the relations,” he said. The last high-level Indian visit to Hungary was in 1993 and to Algeria in 1985.

The visit also identified new areas of cooperation to take the bilateral relations forward. Hungary has emerged as a launchpad for Indian companies looking to expand their operations in Europe. In 2014-15, India was the single largest greenfield investor in Hungary, with investments to the tune of $2 billion. Post-Brexit, Hungary is keen to invite companies that have been hit by Britain’s move to exit the European Union. “Hungary is emerging as an important base for Indian companies to start their European operations. And Brexit is bound to enhance Indian business involvement in Hungary,” said Secretary (west) Sujata Mehta.

A joint working group has been set up to explore the possibilities of collaboration in science and technology, including defence technology. An MoU for cooperation in water management was signed; this could be of help as India endeavours to clean its rivers and make them navigable.

India also banks on Hungary for its support at international fora, and Ansari thanked it for supporting India’s membership of the Missile Technology Control Regime and the Nuclear Suppliers Group.

In Algeria, the focus of Ansari’s visit was to find ways of enhancing cooperation in the hydrocarbon sector. “India is looking to enhance its options for buying oil and gas just as Algeria wants to increase its options in terms of buyers for its petroleum offerings,” said Mehta.

Also, Algeria is keen that India partners with it in harvesting a mammoth reserve—five billion tonnes—of phosphate. Ansari’s visit gave a political push to the talks about India setting up a fertiliser plant in Algeria as a joint venture. “India has to now firm up its proposal on setting up the fertiliser plant with regard to financing the company and finalising who will be in charge of engineering and which Indian company would be in charge of offtake,” said Satbir Singh, India’s ambassador to Algeria.

The Algerian PM, said an Indian official, was keen that the project be finalised this year. Minister of State for Fertilisers and Chemicals Mansukh L. Mandaviya, who held discussions with the Algerian Minister of Industry and Mining Abdesalem Bouchouareb on the setting up of the fertiliser plant, said he would brief Prime Minister Narendra Modi about the proposal and the progress made in the talks.

Also of importance during the visit was the support offered to India on the issue of tackling cross-border terrorism. The Algerian PM expressed his country’s full support to India’s stand on Jammu and Kashmir, saying his country believed that Kashmir was an integral part of India. This is significant since Algeria is a member of the Organisation of Islamic Cooperation, where Pakistan has often accused India of human rights violations in J&K.