Greenfield is a 35-year veteran of the Foreign Service 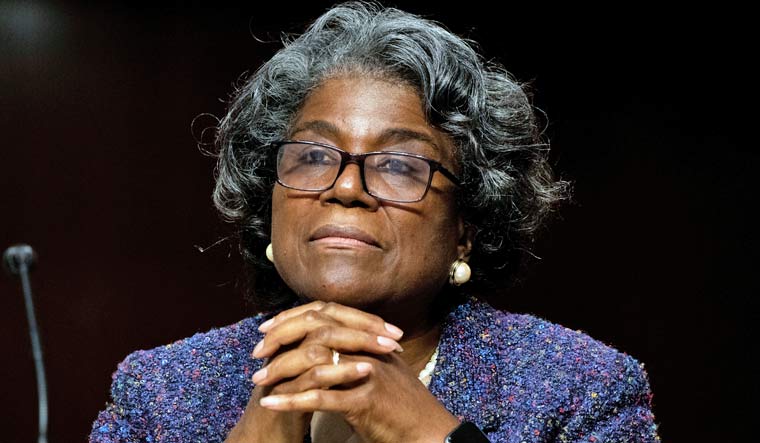 Linda Thomas-Greenfield, a veteran diplomat and Joe Biden's nominee, has been confirmed as America's next ambassador to the United Nations by the US Senate, adding a key member to the President's national security team as it seeks to reengage with the world body.

The 100-member Senate on Tuesday backed Thomas-Greenfield by 78 to 20 votes to be US' representative at the world body and a member of Biden's Cabinet. Thomas-Greenfield, 68, is a 35-year veteran of the Foreign Service who has served on four continents, most notably in Africa.

Vice President Kamala Harris is scheduled to administer her the oath of office at the White House on Wednesday.

"Today's Senate confirmation of Linda Thomas-Greenfield as the US Permanent Representative to the United Nations reinforces President Biden's commitment to restore and expand American leadership on the global stage," Secretary of State Tony Blinken said.

"Thomas-Greenfield is a seasoned diplomat, deeply committed to American values, and the right choice to rebuild our nation's standing at the UN and in other multilateral venues. I congratulate her on her confirmation, and eagerly anticipate our partnership in serving the American people and their interests," Blinken said in a statement.

A UN Spokesperson told reporters in New York that the UN Secretary General very much looks forward to working with the ambassador on issues of climate crisis, the recovery from COVID-19, and the many other global issues that are on their shared agenda.

Republican Senator Jim Risch, ranking member of the Senate Foreign Relations Committee, said Thomas-Greenfield had a long-standing record of service at the Department of State and is qualified for the role of US ambassador to the UN.

"As malign actors like the Chinese Communist Party ramp up their influence efforts at the UN and other multilateral institutions, it is critical that we have a UN ambassador that will be tough and will stand up for the American ideals of freedom, democracy, and the rule of law," he said.

As our nation confronts the greatest international health crisis of our generation alongside critical, long-term global threats such as human rights, rule of law and climate change, collaboration and coordination with the US allies has never been more pressing, said Senator Jeanne Shaheen.

A seasoned diplomat with over 30 years of experience  from working on global economic development to humanitarian issues in developing nations  Thomas-Greenfield brings the knowledge and experience needed to represent the US as its ambassador to the United Nations, she said.

"In the first weeks of the new administration, I have been deeply troubled by President Biden's nominees' dangerous rush to embrace the worst elements of the Chinese Communist Party.

"Ms Thomas-Greenfield's record shows a pattern of apologizing for China, praising their Belt and Road Initiative, failing to call out their human rights atrocities and political oppression, and downplaying the risk China poses to the security and safety of the American people," Cruz said.

Cruz said he believed that Thomas-Greenfield's decision to give remarks at an event sponsored by the Confucius Institute, a key propaganda platform for the CCP, should be disqualifying.

"The United States desperately needs a UN ambassador who will stand up to China and their pervasive influence at the United Nations. Due to her extensive record, I do not believe Ms Thomas-Greenfield is capable of doing so and therefore oppose her nomination. I remain dedicated to engaging vigorously with the Biden administration and State Department to combat China's malign influence throughout the world," Cruz said.

In his first major foreign policy address as the President this month, Biden said America cannot afford to be absent any longer on the world stage.

Declaring that "America is back," Biden had said that his administration will "repair" the country's strained relations with its allies during the previous Trump administration and engage with the world once again.

The Biden administration seeks to reengage with the UN after four years of former President Donald Trump's "America First" posture left the US isolated internationally.