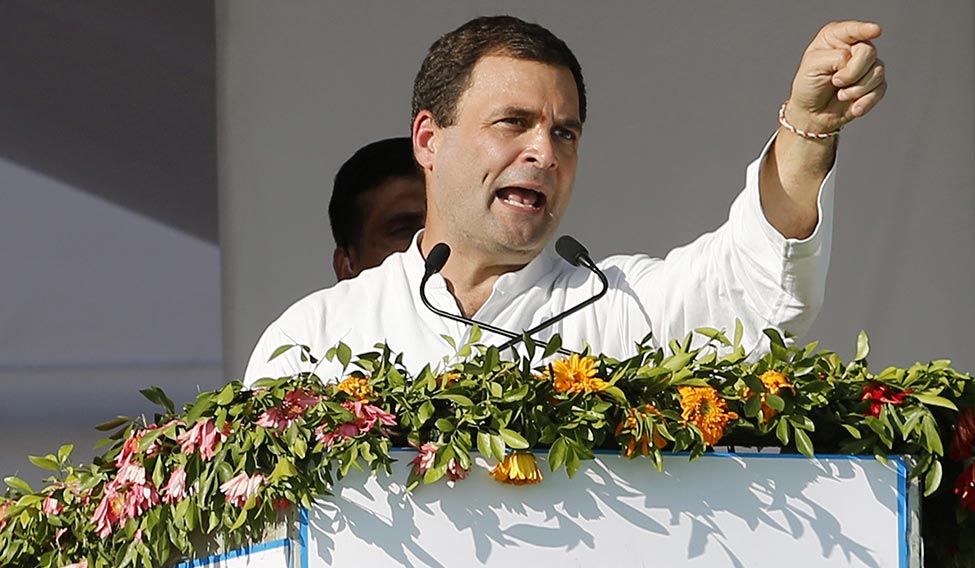 Congress vice president Rahul Gandhi has been full of surprises of late. At a joint press conference with other opposition leaders during the winter session of Parliament, he said he had information about the personal corruption of Prime Minister Narendra Modi and that was the reason why he was not being allowed to speak in the Lok Sabha. And, the opposition leaders appeared completely clueless. The sensational declaration had the effect of bringing the entire focus on Rahul. Even the BJP pulled out its big guns to take on him, a departure from its constant assertion that he was not to be taken seriously.

Even the Congressmen were surprised. And Rahul assured them that he had “bulletproof evidence” against Modi. There was, however, unease in the Congress that the challenge could come back to haunt Rahul, with the BJP and even the other opposition parties deriding him for making empty threats. In two rallies that he addressed after the session got over, one in Goa and the second one in Uttar Pradesh, all eyes were on Rahul, to know whether he would make the big revelation. But that did not happen, although he did take on Modi aggressively on the issue of demonetisation.

Delhi Chief Minister Arvind Kejriwal questioned Rahul about not revealing the information he had on Modi and wondered whether there was a deal between the two. Nationalist Congress Party leader Sharad Pawar, too, took a swipe at Rahul. “MPs were worried how they would get out of the Parliament building after the quake,” he said. “But since there was no earthquake, there is a feeling that we can sleep peacefully.”

And on December 21, almost a week after the winter session got over, Rahul sprang another surprise when he chose a public rally at Mehsana in Gujarat, Modi’s home turf, to make a serious allegation of corruption against Modi. He said Modi had taken money from the Sahara and the Birla groups in 2013-14 when he was chief minister of Gujarat. Rahul said Sahara paid Modi 040 crore and the Birlas paid Rs 12 crore. He said the information was based on the Sahara-Birla papers, which allegedly listed payoffs made to politicians. There has always been speculation that Rahul’s information had something to do with the Sahara-Birla papers, which had already been brought to the notice of the Supreme Court by activist-lawyer Prashant Bhushan. The court had asked Bhushan to present more evidence.

The BJP called the allegations baseless and said the Supreme Court had rejected the same charges when made by Bhushan. Union Minister Ravi Shankar Prasad hit back at Rahul, saying he had wielded more power than prime minister Manmohan Singh during the ten years of the UPA government, but he never spoke against corruption during that time. Prasad said Rahul was making the charges out of frustration and that the PM was as clean as the Ganga.

For the allegations to have an impact, parties other than the Congress also need to voice them. However, on the last day of the Parliament session, Rahul surprisingly had broken ranks with the rest of the opposition and gone for a meeting with Modi.

Moments before the opposition was to march to the Rashtrapati Bhavan on the issue of demonetisation, Bahujan Samaj Party supremo Mayawati, who was in the Rajya Sabha, received a piece of information, which in the words of another opposition leader “freaked her out”. She immediately approached Samajwadi Party’s Naresh Aggarwal, unmindful that he belonged to a rival party, and asked him about the news that Rahul was going to meet Modi to take up the issue of farm loan waiver in the poll bound states of Uttar Pradesh and Punjab.

The decision to meet Modi alone on an issue that pertained to poll bound states and that, too, on a day when the opposition was to have a united march to the Rashtrapati Bhavan in protest against Modi, did not go down well with other parties. Many of them decided to drop out of the meeting with the president. “The manner in which the Congress leaders met the prime minister without taking other opposition leaders into confidence is disappointing,” said NCP leader D.P. Tripathi. The SP’s Amar Singh indicated that the Congress could not be trusted. “We saved the Congress government on the nuclear deal issue. And we had to go to jail. But this has been our experience with the Congress,” he said.

In an otherwise frosty meeting, Modi is said to have told Rahul, “Aate raha kariye, milte raha kariye (Keep coming over and meeting),” perhaps knowing that the meeting had broken opposition unity.

Congress leaders, however, said Rahul could not have stayed away as an appointment had been sought much in advance, and once it was granted, he could not have said no, especially on an issue he had taken up so vociferously in his election campaign in UP. Also, beyond Parliament, the political parties were bound to have their own individual strategies, they said. But, the point made by other opposition parties was that Rahul could have timed the meeting better.

Now, Rahul’s charges of corruption against Modi will gain traction only if other opposition parties also take up this line of attack.