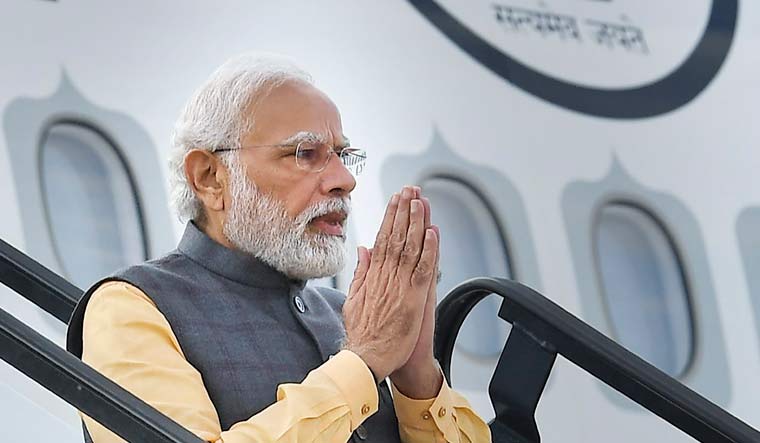 Prime Minister Narendra Modi has been summit hopping. The two-day G7 “for a more equitable world'' is over along with the bilateral meetings and Modi is off to the UAE to cement bonds.

“Leaving Germany after a productive visit in which I attended the @G7 Summit, interacted with several world leaders and participated in a memorable community programme in Munich. We were able to discuss many issues aimed at furthering global well-being and prosperity,'' tweeted Modi.

It is clear from the montage of pictures that the bromance continues. From the chai pe charcha with the Canadian Prime Minister Justin Trudeau to the vigorous handshake with US President Joe Biden, Modi's trademark personal chemistry with his counterparts was on the display.

The agenda for the G7 summit was clear: Russia, China and the situation in Ukraine. The West has promised to “show them our pecs'' as Britain Prime Minister Boris Johnson quipped—a dig to President Vladimir Putin's bare back horse riding macho pictures—as a show of strength against Russia. Modi chose to sign on to protect free speech. Like Johnson's earlier snarky remark, there was no doubt that the “2022 Resilient Democracies Statement'' was directed at Russia and China. The countries have committed to guard “the freedom, independence and diversity of civil society actors protecting the freedom of expression and opinion online and offline.”

While India's position on ending the violence in Ukraine is clear, Modi ensured that he also reiterated the position on climate and energy, batting for the rest of developing world. “Unfortunately, it is believed that there is a fundamental collision between the developmental goals of the world and environmental protection,'' he said. “There is also another misconception that poor countries and poor people cause more damage to the environment. But, India’s history of over thousands of years completely refutes this view.”

Energy, too—very much at the center of the Russia debate—found a mention in his speech. “All of you will also agree with this that energy access should not be the privilege of the rich only; a poor family also has the same rights on energy,'' he said.  “And today, when energy costs are sky-high due to geopolitical tensions, it is more important to remember this thing.”

Modi's journey to the West may have been fruitful, but it will be his visit to the East that will be the true test of diplomacy. His visit to the UAE—the fourth to Abu Dhabi—and his summit with UAE President Sheikh Mohammad bin Zayed Al-Nahyan comes at time when India has faced flak over former BJP spokesperson Nupur Sharma's remarks on Prophet Muhammad. South Block has worked hard to put a distance between the government and the remarks, but with the arrest of Alt News co-founder Mohammad Zubair by the Delhi Police for a four-year-old Twitter post—Zubair's tweet having ensured that Sharma's speech on the Prophet was noticed—the issue is still simmering.

Foreign Secretary Vinay Mohan Kwatra at a briefing said on being asked whether the issue would figure in discussions, “Almost all West Asian nations have a clear understanding of India’s position and the situation on this issue. We have specified it on various platforms. PM Modi is visiting the UAE for two main agendas. To pay condolences for the demise of the ruler of the UAE and to meet the new President.” On the agenda, he said, were energy security and people-to-people ties, along with other areas of climate, trade, education, and culture.  “When it comes to relations between India and the UAE, they are diverse and robust. When the leaders meet, enhancing cooperation in all these areas will be discussed. Can’t specify details before the meeting,” he added.

Modi has been attempting to obliquely address the polarisation. In his blog on his mother's birthday, Modi mentioned his friend Abbas who lived with the family when he was young. In the UAE, which is a big trading partner, the bilateral trade grew by 68 per cent to stand at 72.9 billion dollars in 2021-22—Modi will be keen to ensure that the relationship that has been very much his centerpiece in the reach efforts remains warm.